Few people who watch The Walking Dead can forget how Season Four ended. After finally finding their way to Terminus and regrouping, Rick and the others quickly learned that something wasn’t right. After attempting to escape, they found themselves being herded by bullets to a railcar, which they were then told to board. Inside, they found the rest of their companions and realized the community was nothing but a lie.

A series of hints were given as to what was going on there, like the room filled with candles, the names of people written on the floor, and the slogan: “Never Again. Never Trust. We First, Always” written on the walls. The smart money says this community is made up of cannibals, based on material taken from Volume 11: Fear the Hunters. This would make sense, given their efforts to lure people in and the fact that they didn’t kill Rick and the others right away. 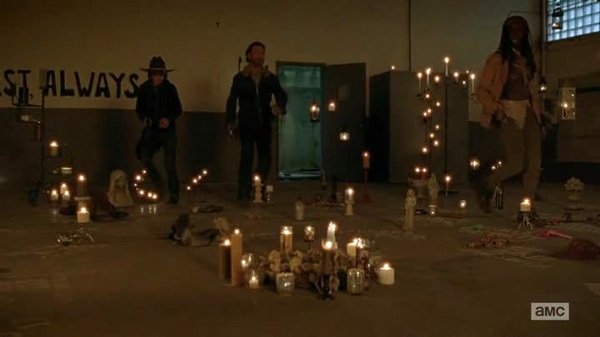 In any case, the season ended with their crew reunited in crisis and Rick uttering the chilling pronouncement: “They are gonna feel pretty stupid when they find out… They screwed with the wrong people.” As it turns out, AMC had a different ending in mind. Once again, mirroring what was written in Volume 11 of the original comics, the real conversation between Rick and Abraham was punctuated with some F-bombs.

AMC filmed this ending first, but decided to tone it down for the sake of their viewing audience. To which I have to ask… really AMC? You have a series that showcases rotting corpses eating people alive; but swearing, that’s wrong? You’re season finale was especially bloody, featuring men attempting to rape Michonne and Carl, Rick biting a man’s jugular, an evisceration, and even strong hints of cannibalism.

In that same season, you had people bleeding out of their eye sockets, the Governor cutting off Hershel’s head, and a massive prison assault where multiple characters were violently gunned down. You even had one episode where a little girl murdered her sister and had to be executed, and where partially-cooked zombies had their heads explode once they were shot. And yet, you think the word “fuck” is a step too far? REALLY AMC???

Anyhoo, Season Five kicks off October 12th, by which time all questions regarding the true nature of Terminus, and why they choose to keep their captives alive, will be answered. And in the meantime, check out the clip of Rick delivering his final line as he was meant to, F-bomb and all: 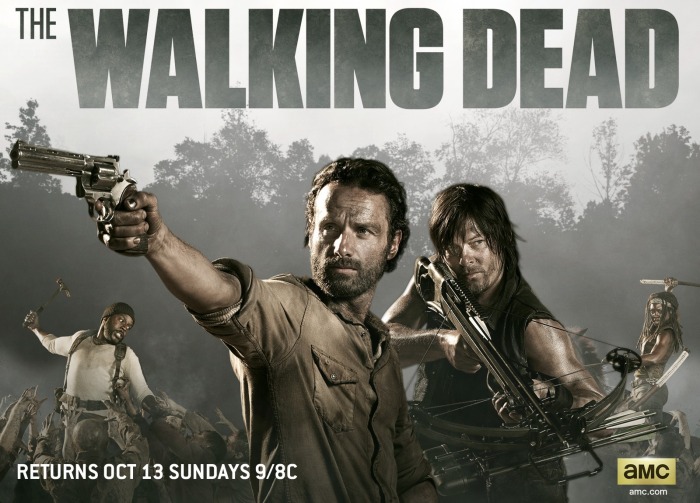 And we’re back with another episode of the Walking Dead with just four more episodes to go before the season finale! And in another lovely act of double-entendreness, the episode was named “Still”, which seems to allude to all the dead bodies laying about, the story of Daryl and Beth’s will to survive, and the moonshiner operation they raid so Beth can finally get drunk.

And of course, the episode focuses exclusively on these two, avoiding any further development where Abraham, Rosita, and Eugene’s introduction is concerned, the different group’s journey towards the mysterious “Terminus”, or their eventual reunification. Yeah, this week was all about Beth and Daryl and was basically a pacing episode.

So let’s get going and wrap this piece of enjoyable filler up so we can get back on track for next week! 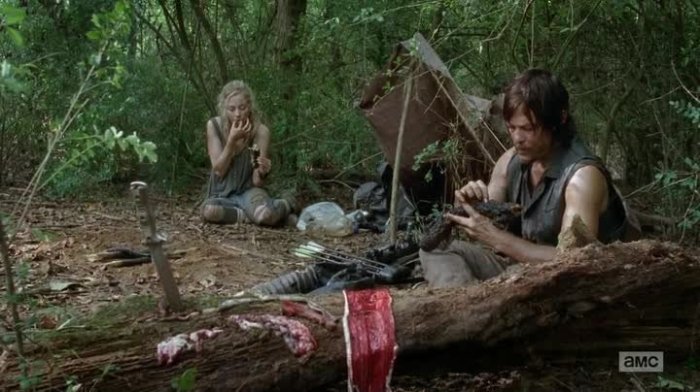 The episode opens with Beth and Daryl still in the wilderness, desperately looking for food, shelter, and the other survivors. After spending the night hiding inside the trunk of a car and waiting for a horde of Walkers to move on, they set camp and enjoy a meal of firepit cooked snake. Beth then decides she needs a “real drink” and decides to head off and look for alcohol.

It’s not long before she runs into some Walkers and Daryl is forced to come retrieve her. After leading her back to the camp, she is outraged and claims that she is going off alone is she must. Daryle reluctantly accompanied her and they find their way to a country club and begin to look around. Inside, they find numerous people who committed suicide, but since came back.

While Beth looks for alcohol, Daryl busies himself collecting money, jewelry, and anything they can eat or burn. They come across several Walkers, and Beth loses the only bottle of wine she could find and her change of clothes are stained with gore. Finally, they come to the bar where the only thing left is a bottle of peach schnapps. Beth begins to cry before she can drink, and Daryl smashes the bottle.

Leading her to a cabin he sees he and Michonne found, he opens up the still and procures several bottles of moonshine. They head inside and secure the place, and Beth begins to drink. She invites Daryl to join and they begin to play “I never”, which becomes an excuse for them to open up to each other. Eventually, Daryl tires of it and begins ranting.

His outburst attracts a Walker, and he pins it to a tree with several arrows. Eventually, Beth stabs it in the head, and the two begin to argue about all they lost and how things will never be the same again. Daryle finally breaks down and admits that he blames himself for the way things ended at the prison. Beth hugs him, and the two spend the rest of the night talking.

During the night, Daryl finally tells her what he was before things turned – apparently, he and Merle were just drifters. Beth admits that she misses everyone and how she hoped her father’s remaining days would have been quiet. She also tells Daryl that she thinks he will be the last man standing, that he must put his past behind him, and suggest they burn the cabin down.

They douse the place with the remaining moonshine, and using a stack of bills Daryl took from the country club as a torch, set fire to the cabin and leave it behind. They flip the burning mess the bird, and then head off into the night when they see Walkers approaching…

Summary:
Like I said already, this was a pacing episode, which just about always translates to tangents, asides, character development and assorted filler. Nevertheless, it was enjoyable. I thought Daryl and Beth were both well portrayed, their performances believable and appropriate, and the ending was especially poignant and powerful for me.

Though I must admit, at this point in the show I am getting a bit tired of the repetitive messages – the whole “we can’t lose hope or all is lost”, or the “I don’t care anymore. Oh wait – yes I do!” stuff. It is one of the central, overriding themes of the story and it’s a good one, but it’s well established at this point. And it does kind of feel like it’s something they go back to whenever they feel the need for pacing or a bottle episode.

But aside from that, I felt they got the title of the episode wrong. Sure, Still is yet another clever double-entendre, alluding to the pain of remaining alive in the face of so much death and the moonshine-producing apparatus itself. But for me, the real essence of this episode came across in the way that everything they found to help them forget ended up being destroyed.

Think about it. Beth wants to get drunk and forget, and this brings them to the country club. There, she finds some alcohol and a nice change of clothes. But its not long before the clothes are ruined and the bottles are used for self-defense or smashed out of anger. They find the cabin and the moonshine, but then decide to destroy them because they need to blow off steam and forget all the death.

In any case, that’s twelve down and four to go! Hopefully, next week, we’ll see some more development on the whole “We got to get to DC” verus “We gotta find the others and/or go to this ‘Terminus’ place we keep hearing about”. Until then!