The news that Disney has purchased LucasArts for a cool 4 billion has certainly been making the rounds of late! Even more interesting is the release that they will be releasing the sequel trilogy sometime in 2015. This news has once again fueled a great deal of speculation as to what direction the new movies will take. Regardless of who is at the helm, it is generally agreed that there are only so many story arcs that the new movies could take…

The following list comes from AMOG‘s (Alpha Male Of the Group) online magazine, courtesy of Keith Veronese. The list is pretty comprehensive, and covers all the likely candidates for potential sequel and spinoff story lines. And lets face it, with the course of the prequels took, we all would like something new to rehabilitate the series! And with Lucas no longer at the helm, we all might just get what we want!

The first possible story arc for the new trilogy would be to pick up where the last movie left off. As it stood, the Empire was dealt a significant blow, but was far from finished. Granted, the Death Star was destroyed and both the Emperor and Darth Vader were dead, but the majority of the Imperial Fleet was still intact, as was its infrastructure and network of allied planets. As evil and rotten as it was, the Empire still commanded a great deal of loyalty and support within the Core Worlds, and the Rebel Alliance was likely to have its hands full dealing with all of them.

The benefits of this story are pretty clear. It’s a blank canvass in terms of plot, into which a new generation of writers can hurl all kinds of ideas. In addition, it’s a chance to bring back the old gang for another run, albeit with new actors and actresses. 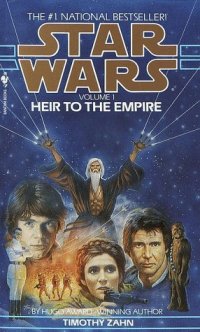 Written by noted sci-fi author Timothy Zhan, the Thrawn Trilogy are perhaps the most famous novelization in the franchise. Set five years after events in Return of the Jedi, the trilogy centers on the enigmatic character of Grand Admiral Thrawn, the last of the Empire’s senior officers who has assumed control of the Imperial fleet. Intrinsic to these plans are a lost fleet that disappeared prior to the Clone Wars, a secret cache of cloning vats the Emperor established during his reign, and an insane Jedi Master living on a remote world.

Meanwhile, Senator Leia Organa Solo (that’s right, they tied the knot!) is pregnant and expecting twins. While she has become a member of the New Republic government, Han has continued in his role as a fleet General and is using his old contacts in the smuggling world to try and drum up shipping for the new government. His efforts bring him into contact with a group of privateers who will one day go from being self-interested sorts to the same kind of heroes Han had become.

And finally, there are the adventures of Luke, who is drawn to Jedi Master C’boath and seeks to learn from him. However, they quickly become enemies as Luke realizes he is insane and seeks to capture Leia’s twins for his own purposes. He also comes into contact with Mara Jade, a Force-sensitive woman who once served the Emperor. She plans to kill Luke, but circumstances have thrown them to work together and cooperate.

Needless to say, this would be a good story arc for the series, and would be convenient since it’s already been written in full. All the old characters are reprized and fleshed out, and some new, decidedly Star Wars-esque characters are also introduced. And given that much time has passed since the originals, it would be a good opportunity for some new actors to tackle the roles of all our favorites. I’m sure Disney would be willing to spring for some cameos from the original cast as well!

True, we got more than enough of his origin story with the prequel trilogy, but there’s still plenty of room for Darth Vader to grow! In fact, there is a twenty year gap between the prequels and the original movies, during which time Vader essentially did his best work. This included hunting down the remaining Jedi, rooting out dissent and resistance to the Emperor’s rule, and just generally cementing his reputation as an evil cybernetic menace!

The benefits here are pretty obvious, at least as far as a single movie are concerned. Plenty of lightsaber fights, stalking from planet to planet looking for Jedi, and lots of that creepy respirator and James Earl Jones-esque dialogue. However, it might be difficult to maintain a three-movie story arc from this. But that might not be a problem, given the next option:

Boba Fett is arguably the most popular member of the supporting cast, and there are plenty who believe that he deserves his own moment in the spotlight. And after the prequels gave him a passing intro, there might be some merit to giving him a more complete origin story. Imagine Boba Fett as a young man, going about the known universe and establishing himself as the most notorious bounty hunter.

Aside from being action-packed and full of plenty of the seedier stuff of Star Wars, this film could be paired with a Vader movie as a potential second installment. And perhaps a third could be opened involving Obi-Wan, focusing on his adventures as he travelled from place to place on Tatooine, hoping to stay off the Empire’s radar while keeping an eye on Luke.

Finally, there is an area of the franchise which has become rather popular of late, and that is the rather fertile period in the Star Wars timeline known as the Sith Wars. What began with the Knights Of The Old Republic series has now evolved into a MMOG with Star Wars: The Old Republic. And even though the reception was not as extreme as LucasArts might have hoped, the stage has certainly been set for a possible second prequel series.

Taking place thousands of years before the events in the first Star Wars trilogy, the Sith Wars chronicles the titanic war which took place between the Old Republic and the Sith Empire. And although there have been several installments in the franchise that carry the name “Sith War”, the expanded universe now claims that the greatest confrontation took place 3681 years before the fall of the Old Republic and lasted until 3653. This war was in turn the result of over 1300 years of preparations and buildup by the Sith, who never forgot the crushing defeat they had suffered at the hands of the Republic during the Great Hyperspace War.

The benefits of this story are also quite obvious. In addition to being a very established story arc, there are plenty of interesting characters, developments and battles in this period which, if properly developed, would result in cinematic gold! What’s more, people do enjoy origins stories which are well told, and after the mixed reviews of the last prequels, a deep-origins story could be just the thing to rehabilitate the franchise. And it’s got all the right elements; Jedi, Sith, lightsaber fights, and a titanic war between good and evil, similar in tone to the war between the Rebel Alliance and the Empire.

What’s more, this story will have no sense of duty to suffer from. Unlike episodes I, II, and III which were burdened by having to explain where all the original characters came from, how Anakin fell to the Dark Side and how the Empire came to be, a Sith War trilogy would be able to tell a story where the details are not entirely pre-written. What’s more, the massive war does not suffer from the ambiguity or the Clone Wars, which seemed like little more than background for the prequels main focus – which was the fall of Anakin Skywalker. This time around, we’d be able to see lots of fighting and not be distracting by a whining Hayden Kristensen complaining about how much his life sucks!

So what’s it going to be? Personally, my money is on options two and five. Having read the Thrawn Trilogy and thoroughly enjoyed it, I would certainly pay money to see it adapted to the big screen. At the same time, I’m itching to see some of that Sith War swashbuckling and fleet battles! Man, tough choice, and the studio hasn’t even announced what they might be planning yet…

Oh dear. It seems that Disney, not content to let other movie magnates have all the fun, will be launching (no pun) a reboot of its own. Yes, The Rocketeer, that kitsch, feel good movie about a guy who finds a rocket pack and becomes a super-hero, is getting remade for a new generation.

Personally, I got nothing against the original. Families had to have some kind of inoffensive option for super-hero movies back when Spiderman didn’t exist and Batman was still a bit Gothic for children to watch. But why does it need to be remade? Wasn’t the last one enough?

But then again, that’s a can of worms which myself and many smarter people besides have already opened. If you pull one thread in this giant tapestry known as reboot/remake/relaunch fever, it all comes tumbling down!

Luckily, some of the folks over at Vimeo made this hilarious video of what The Rocketeer would look like if it had been made into a Pixar movie. I can’t help but wonder if they have the right idea here. Seriously, when was the last time Disney ever did anything great that was live action?

And just to poke fun at Disney, here’s a musical clip from Family Guy where The Rocketeer didn’t do so well (at 1:24), not to mention Michael Jackson. Geez, MacFarlane, talk about kicking a dead horse!