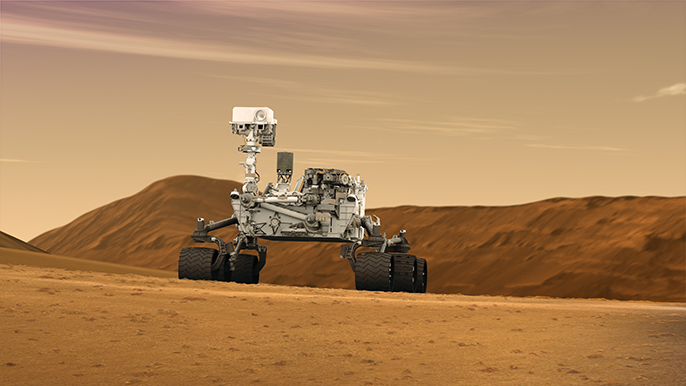 Earlier this month, Curiosity marked its second year on the Red Planet, and this anniversary comes amidst plenty of exciting news and developments. Ever since the rover touched down at the Bradbury Landing site inside the Gale Crater on August 5, 2012 at 10:31 pm PDT (August 6, 05:31 GMT), it has been busily searching for signs that life once existed on Earth’s neighbor. And as it enters into its third year of exploration, it is getting closer to accomplishing this lofty goal.

The nuclear-powered explorer is the largest, most advanced rover ever built. And since nothing like it had ever flown before and the maintenance facility was over 160 million kilometers (1oo million miles) away, the first months that Curiosity spent on Mars involved an array of system tests before it took it first tentative rolls across the Martian sands on its roundabout path to Mount Sharp. 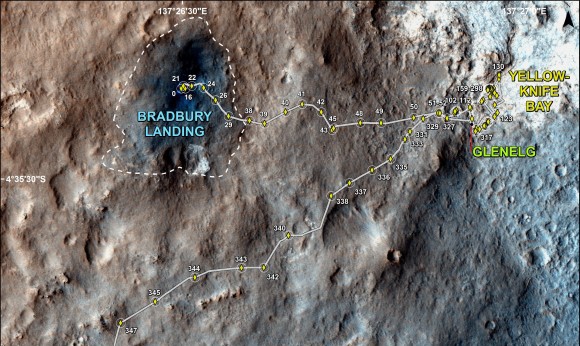 Curiosity’s main mission was to find out if there are any places on Mars where life could have once existed – specifically, areas displaying minerals and geology that could have been produced by water. The Bradbury Landing site, where it touched down, turned out to be very close to an ancient dried lake bed in an area named Yellowknife Bay. According to NASA, this lake bed may have been able to sustain microbial life billions of years ago.

And then, barely six months after landing, the scientists struck gold when they drilled into a rock outcrop named “John Klein” at Yellowknife Bay and unexpectedly discovered the clay bearing minerals on the crater floor. This was the first instance of Curiosity finding clay-bearing minerals. or phyllosilicates, which are a key sign that organic molecules could exist on the planet. 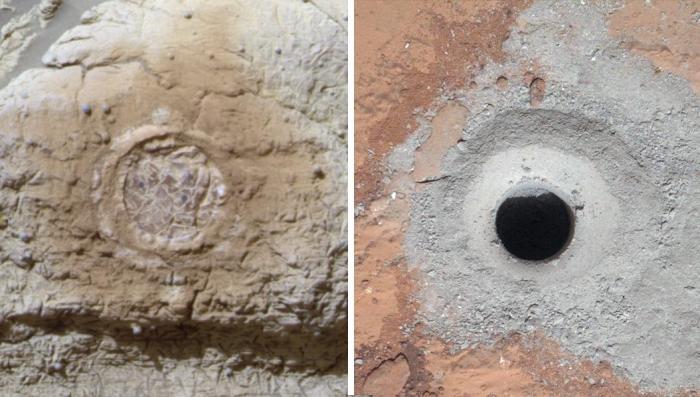 As Curiosity Project Scientist John Grotzinger of the Caltech said in a statement to mark the anniversary:

Before landing, we expected that we would need to drive much farther before answering that habitability question. We were able to take advantage of landing very close to an ancient streambed and lake. Now we want to learn more about how environmental conditions on Mars evolved, and we know where to go to do that.

Compared to its first year, which was marked by many firsts – such as the first drilling operation on Mars, the first laser firing, and first UV night scans – Curiosity’s second year on the Red Planet has been more routine. However, it hasn’t been without its share of excitement. In February, the rover cleared a dune that blocked its progress and in July it negotiated a detour around rocky terrain at Zabriskie Plateau. 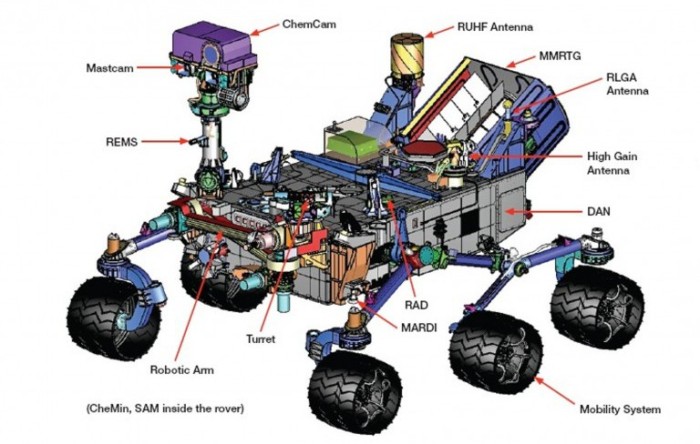 However, by far, the majority of the rovers second Earth year on the Red Planet has been spent driving as fast as possible towards a safe entry point to the slopes of Mount Sharp. To date, Curiosity’s odometer totals over 9.0 kilometers (5.5 miles) since landing inside Gale Crater on Mars in August 2012, and her on board camera has snapped over 174,000 images – many of which have been transformed into panoramic shots of the surface.

The desired destination for the rover is now about 3 kms (2 miles) southwest of its current location. This consists of a bedrock unit that for the first time is actually part of the humongous mountain known as Mount Sharp. As the primary destination on her ongoing mission, this layered mountain in the Gale Crater towers 5.5 kilometers (3.4 miles) into the Martian sky, and is believed to hold the most compelling evidence of life yet. 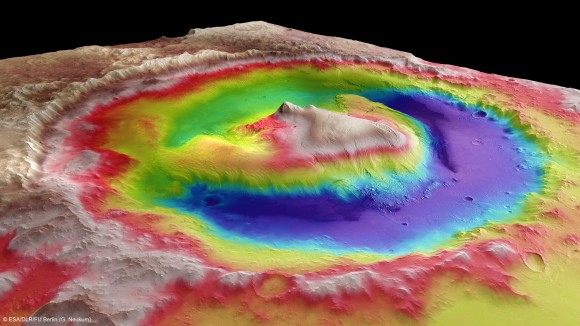 The sedimentary layers in the lower slopes of Mount Sharp are the principal reason why the science team specifically chose Gale Crater as the primary landing site. Using high resolution spectral observations collected by NASA’s powerful Mars Reconnaissance Orbiter (MRO), they were able to determine the presence of deposits of clay-bearing minerals. or phyllosilicates, a key sign that organic molecules could exist on the planet.

In late July of this year, the rover arrived in an area of sandy terrain called “Hidden Valley” which is on the planned route ahead leading to “Pahrump Hills”. Scientists anticipated that the outcrops here would offer a preview of a geological unit that is part of the base of Mount Sharp for the first time since landing. However, the sharp edged rocks caused significant damage to the rovers six aluminum wheels, forcing it to make a detour. 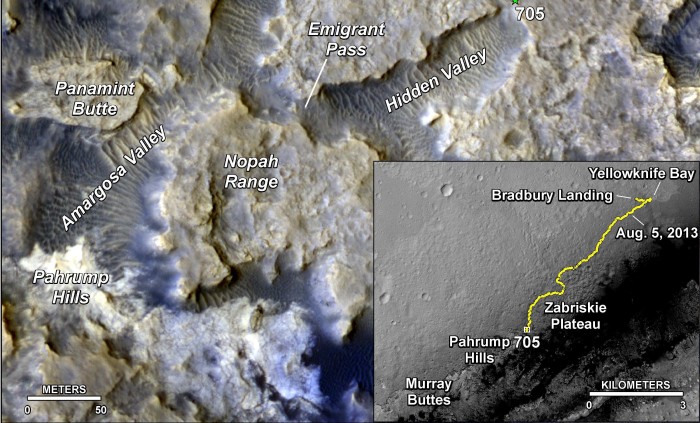 This detour will take Curiosity to a similar site called “Bonanza King” to carry out its fourth drilling mission. According to NASA, this is no great loss because the two areas are geologically connected and the space agency is keen to look at a formation that is different from the crater floor formations encountered so far. Engineers are studying Bonanza King to see if its is suitable for drilling by assessing whether or not the plates seen on the surface are loose.

When drilling operations resume, NASA will study alternative routes to Mount Sharp and determine how well the rover’s wheels can handle sand ripples. However, as Dr. Jim Green, NASA’s Director of Planetary Sciences, said during an interview during the rover’s second anniversary in Washington, DC : “Getting to Mount Sharp is the next big step for Curiosity and we expect that in the Fall of this year.”

Godspeed, little rover! And I do hope that it finds the long-sought-after organic particles it has been looking for since the mission began. This discovery will not only show that life once existed on Mars (and still does in some capacity) it will also be one of the greatest scientific finds of all time, and maybe even serve as the starting point for ensuring that it can exist again.