You know me, I’m not really in the habit of reviewing television shows that don’t involve a science fiction plot or zombies. But Community is one of my favorite shows currently on TV, and this past week they did an episode that I found absolutely brilliant. Starting with the premise of a new social utility app that let’s people rank others, it then got into some serious dystopian lit territory!

To break it down, the setting of the show – Greendale Community College – becomes the beta testing ground for an app called MeowMeow Beenz. This gives people the chance to rate each other the same way they would a movie or product online, and it becomes a big hit on the campus. Quickly, people realize that ratings made by people with five beenz (five kitty faces) carry more weight, and a social hierarchy is formed!

That’s when all the dystopian imagery comes into play. The school is then rezoned based on people’s rating and everyone is forced to dress accordingly. The fives live in pastel covered room, wear white robes and futuristic looking devices, and are waited on hand and foot. Four’s dress like something out of Logan’s Run and live in the halls adjacent to them, where they aspire to become fives.

Threes and Two live in the “common area” where things are darkly lit, everyone dresses in grey coveralls, and the voice of dean informs them over the PA that “tranquility is advancement… a happy three is a future four”. And one’s are banished to the “outland”, which is the campus grounds that have now been redecorated with barbed wire, search lights, and fires in metal drums.

Eventually, the Fives try to appease the masses by holding a talent contest where the winner will receive Five status. Jeff and Britta, two of the show’s MCs plot to bring it down by getting Jeff to win and then denounce the rating system. But after he wins the contest – which is a clear allusion to American Idol and so many other reality TV tropes – he joins the Fives and tries to become its new leader.

Meanwhile, Britta – disillusioned by his betrayal – goes amongst the Twos and Threes and foments a revolution,  replacing the rule of the Fives with a system of revolutionary justice where the Ones run things. As the leader, she is called “the Mother of Ones”, and judges all the fives by “reducing them to Oneness” – i.e. reducing their status to make them the same as everyone else.

But in the end, Jeff points out the cruel irony that the app developers have played on them. It asks people to rate each other, but the beta test ended days ago and the app itself is already available and rated FIVE STARS. He tells everyone that they must rate this “unregistered Five” by erasing it, and they all do. Realizing it’s Saturday, everyone then leaves school and goes home to sleep.

I tell ya, it was brilliant! Not only did it capture the essence of so many 20th century dystopian epics – showing how a hierarchical system based on fear, greed, the promise of advancement and propaganda can so easily take over. It also captured the very dangers of a revolutionary movement which seeks to replace such a system with one of forced equality, led by a tyrannical mother/father figure. 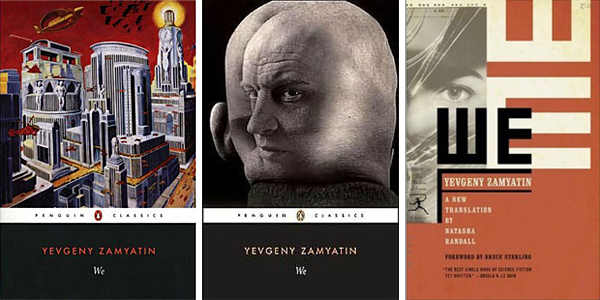 It also managed to provide some fitting satire on reality TV, the very way it conforms to some of our earlier dystopian predictions, and how the drive to be popular and famous is responsible for a great deal of angst in America and the world. Top all that off with some stabs at Zuckerberg, Facebook, and social utility apps in general, and you’ve got yourself a kickass episode!

And at one point, there’s was even a subtle reference to Yevgeny Zamyatin’s WE, the classic novel that inspired Orwell to write 1984 and presumably, Huxley to write Brave New World (though he denied it). At one point, two of the show’s characters are hiding in an office, and label that reads D-503 is on the door. This just happens to be the designation of the main character in WE, as no one in the One State has actual names anymore.

This is the reason I love this show. Dan Harmon, the show’s producer, knows great television, has great writers, and loves being all meta! In fact, that’s something they repeatedly say in the show: “that’s meta!” If you haven’t caught this show yet, then do so. It stars Chevy Chase (until the most recent season), is on Netflix (Canada, but not in the US), and makes hundreds of clever movie and television references.