Came across this trailer recently, for the upcoming movie adaptation of the 2011 novel Divergent. And while the trailer does look like impressive, this does seem like a really predictable move on Hollywood’s part. With the recent adaptation of the Hunger Games and Ender’s Game, it was only a matter of time before producers began looking farther afield to find more examples of YA dystopian literature.

In fact, that’s been a subject which I’ve been thinking about quite a lot lately. In terms of sci-fi trends, the past decade has seen a revival of dystopian literature, and the majority of it seems to be aimed at young readers. Not surprising really, seeing as how issues like the “war on terror”, domestic surveillance and NSA data mining have led to a resurgence of fears that humanity could still be living in Big Brother state in the near future.

And with the rise in publications that appeal to young adult readers – with everything from Twilight to Harry Potter – writer’s began to see just how accessible dystopian tales would be to young readers. And Divergent is certainly no exception to this rule. And just like the Hunger Games, a dystopian society is used as a metaphor to address the issues of teen angst and the struggle to belong.

Basically, the story takes place in a Chicago of the future, where live in a society that is divided into castes and membership is determined when people turn 16. Enter into this Beatrice “Pris” Prior, a young woman with a special mind who undergoes the test designed to determine what caste she belongs to, only to find out that the test failed and she has been declared “Divergent”. 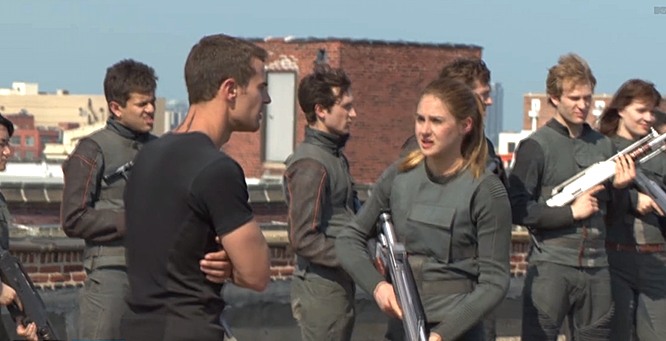 The rest of the movie, as is made clear from the trailer, consists of her joining the resistance – a group composed of “casteless” people (aka. other Divergents) – and waging war against the state. So, a society where people are forced into specialized roles, where those who are different must live in secret or face persecution, and a heroine who rises up to bring down the system… sound like the teenage experience to you?

Yeah, me too. And while some criticize Divergent for being a Hunger Games ripoff, people who actually know their dystopian lit are quick to point out that that book was probably a ripoff of Battle Royale. And in reality, all these books are eating crumbs off the table of Zamyatin, Huxley and Orwell, and the YA angle with all its wish fulfillment is nothing that hasn’t been seen a hundred times before.

Just in time for the holidays, the ACLU have produced this lovely video entitled “The NSA is coming to town”. In it, Santa Claus is portrayed as a government snoop who spies on people as they text, email, and just generally do their electronic business. And it all happens to a lovely reworded version of “Santa Claus is coming to town”. Check it out, and try not to feel too paranoid this holiday season!