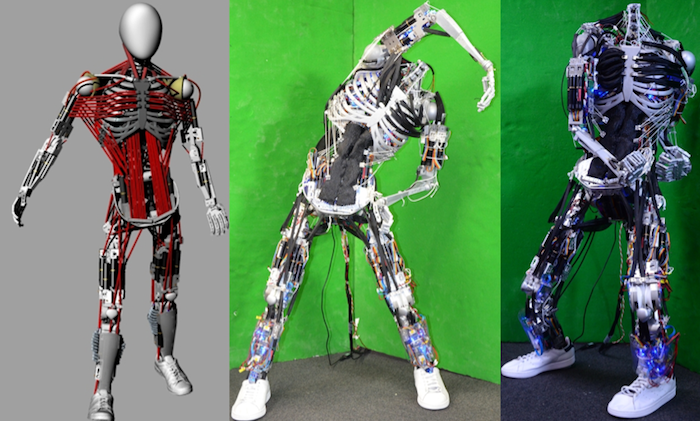 It may seem like someone at Tokyo University drank their breakfast. I mean really, a robot without a head? How is supposed to mimic our facial expressions and creep us out with its glowing red eyes? But when you consider the purpose behind the Kenshiro muscle-bot, you begin to see the rather important method behind the design.

In recent years, various robotics companies have been able to create machines that mimic the animal kingdom – from hummingbirds, to turtles and even squirrels. However, few have managed to tackle the realm of human movement, and shown truly positive results. Hence the purpose of Kenshiro, human-like musculoskeletal robot that was revealed at the Humanoids conference back in December.

For years, the University has been toying with the design for a bio-inspired robot, adding more muscles and more motors with each new design. Standing at 158 centimeters and weighing in at 50 kilograms, Kenshiro basically mimics the body of the average Japanese 12-year-old male. And with 160 pulley-like “muscles” – 50 in the legs, 76 in the trunk, 12 in the shoulder, and 22 in the neck –  the robot mirrors almost all the major muscles in a human and has the most muscles of any other bio-inspired humanoid out there.

And with all the progress being made in developing a fully-functional autonomous machine mind (see Google Neural Net), not to mention a face that can mimic human expressions (see the FACE), it may just be a matter of time before we need to start thinking about applying Asimov’s Three Laws of Robotics. Don’t want a Robopocalypse on our hands!