Well, after about a week of tinkering, complaining, and demanding that Amazon, Kindle and Createspace get their act together, Papa Zulu is now available in all formats, and all in one place! This was a bit of a bugger last week, when I was finally finished with the tedious editing and submission process, only to find that it wasn’t even showing up in the right places.

To recap, Papa Zulu was made available through Amazon.com as of last Monday, but it did not appear with the rest of my books. So for the untrained consumer (i.e. anyone who doesn’t know me already), the book’s relation to Whiskey Delta would have been unclear. In addition, the Kindle edition and the paperback didn’t even appear together, with one only available at Amazon.com and the other at Amazon.ca.

But after a few days, that was all resolved. As of now, all formats of Papa Zulu can be ordered from one place (Amazon.com) and I’ve made sure the links to it have been updated to reflect that. And on top of that, it now appears alongside all my other titles on my Amazon author page. So now it will be easy to find, and people who said they wanted a sequel will actually be able to find it.

Yay for small victories and the work that makes them happen! Woe for the speed bumps and delays that make the extra work necessary! And feel free to check out the book’s listing and my author page, now that they are are in working order: 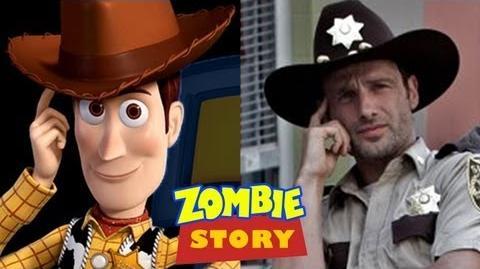 Came across this video crossover not too long ago, and I have to say I was impressed. Drawing parallels between AMC’s The Walking Dead and the Toy Story franchise, creator John Wray uses video clips to illustrate how these two franchises – which could not be more different in terms of target audiences – really aren’t that different. 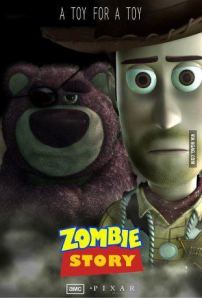 anging from the main characters (Sheriff Woody vs. Sheriff Rick), to the boy’s they love (Andy vs. Carl), to the conflict over who’s their primary caregiver (Woody or Buzz vs. Rick or Shane), to the dangerous hordes they routinely face (little kids vs. Walkers), the benevolent leader who turns out to be a psycho (Lotso vs. The Governor), there really are a lot of similarities to be found.

Granted, none of this is to be taken seriously, but it is very well made, right down to similar events in the story and bits of footage. Who knew Disney and Robert Kirkman could be of similar minds? Then again, ol’ Walt is rumored to be frozen somewhere, a living dead entity awaiting the day when he can be thawed and begin walking the Earth again.

Well, well, well… you remember when you were young and things weren’t exactly going your way? Remember how your parents would tell you to hang on and wait because things would only get better? Or perhaps you had one of those cheery optimistic friends who’d constantly tell you that things are always darkest before they turned to light. Not to be over dramatic, but I felt myself in need of that kind of advice awhile back.

And now, I feel like it’s paid off, because for once I got some good news on the review front that was all positive. As I had hoped, it seems that the 2nd edition of Whiskey Delta has been absorbed by the reading community and the returns are coming back positive! Two more reviews have been added to the queue, one a four star and the other a five! The net effect of this has been to push the overall review of Whiskey Delta up to 3.4 stars (though it looks like 3.5 on the book’s listing).

But what I’m most happy about was that there were people who had just “good book” or “good read” to say, without all the additional remarks about editing and proofreading. In fact, out of a total of twenty, only two reviews actually came back negative on the story itself. Most people who gave it two or three stars said they liked the story, it was just the technical errors that bothered them.

Not so much here. Here’s what the latest reviewers had to say:

(5.0 out of 5 stars) Great read:
Great story about soldiers doing solider business. I recommend it to anyone who likes this type of book. Waiting for the next one!

(4.0 out of 5 stars) A great read:
Lots of action like the way he made me feel as if I was there in the middle of the action. Looking forward to more.

Not too wordy, but that’s fine by me. In short, they liked it, and wanted a sequel. And I thank them for it. This is the stuff authors yearn to hear, the stuff that makes the effort feel like it was worth it and which encourages them to keep writing. And to all my fellow indies out there, especially those I know personally, I hope that you too are getting your share of positive reviews. Lord knows we need this kind of thing, don’t we?

Competition is fierce, the market is being flooded and publishing houses are simply not taking risks on new authors as much as they used to. Every additional star and positive review we earn translates to more sales and more recognition!