With all the work and build-up to the release of Data Miners, I’ve been somewhat lax in working on my other projects. Like I say, I suffer from a specific kind of ADHD that only attacks the literary part of the brain. As a result, I tend to take on too many projects at once, always start new ideas when I’m in the midst of one, and seem to work on them in a rather cyclic fashion. But during the last few months, I somehow managed to buckle down to complete my novel, and now my attention is roaming free again.

And so I find myself returning to the project of “Fortress”, which for the past two years has been the work-in-progress title for the sequel to Source. The other day, I noticed a comment on free-ebooks where a reader wondered when the sequel would be coming. To answer his question: Soon! The nearly-completed manuscript has been sitting in my file folder for almost two years now. Back then, I attacked the idea of some Source sequels with abandon, having finished the original story not long before. However, the project soon lost momentum as new ideas came to me (of which Data Miners was but one!) But now, having freed up a portion of my creative gland (you don’t need the whole thing for editing, I’ve found) I will be getting back on it and finishing it just as soon as possible.

In the meantime, I also created a cover for it, to be made available on Kindle, Nook, Lulu and Smashwords. Here she is, my first conception of what “Fortress” will look like: 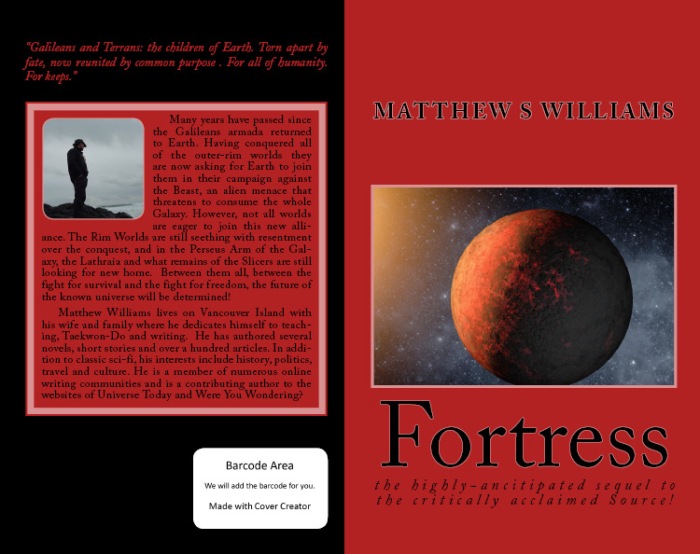