Back with the lastest in Game of Thrones Season 2! As I finished with saying last time, it is by this latest episode in the series that the differences between book and series become most apparent. These were not a bad thing, mind you. But they did hint at a sort of pattern this time around.

Episode 7: A Man Without Honor: 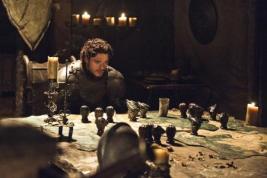 Theon begins looking for the escaped children, but to no avail. He decides to stage their deaths and sends news to Robb in the south. Daenerys begins looking for her dragons, only to find that she’s in the middle of a plot launched by Xaro and the Undying to seize control of Qarth. Robb travels from his encampment with Talisa to deliver his terms to the enemy, leaving Jaime behind to attempt his escape.

Meanwhile, war is on its way to King’s Landing. Tyrion and Cersei worry about Joffrey’s ability to lead. Sansa meanwhile reaches womanhood and is terrified that she must now bear Joffrey’s children. While trying to make his way back to their encampment, John Snow is taken captive by the Wildlings.

Good Points and Bad:
In short, the big threads from episodes 5 and 6 come together and the divergences really become clear. To break them down succinctly: Robb never left his encampment to deliver terms, thus giving Jaime a chance to escape. Nor did he kill his cousin in order to make this happen. To top it off, Catelyn did not let him go to keep the peace in the camp while Robb was away. All this happens quite differently in the text. 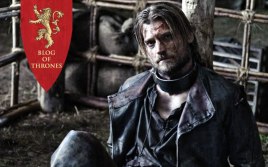 Robb is off on campaign, his romance happens off-camera, and he returns to learn that Catelyn has set Jaime and his cousin go with Brienne because the (fake) news of her son’s deaths has shaken her terribly. She wants her daughters back and is even willing to trust Jaime at his word, and Brienne to deliver him and bring her daughters back. And, as said before, this all took place at Riverrun, not in some encampment along the way.

Second, John did not get lost in the wilderness with Ygritte only to get captured by the Wildlings. He let her go, returned to his camp, and was only taken prisoner after they caught a glimpse of Mance Rayder’s forces and were overtaken. Before that, Qorin made John promise to allow himself to be taken and learn what he could about their plans. By being taken prisoner against his will, the subplot about John’s supposed defection is now gone.

Last, but not least, there was no plot by Xaro to take over Qarth. Nor was there any attempt to steal her dragons to lure into the House of the Undying. She accepted the invite and went in, and Xaro’s plot never went beyond offering her marriage. Clearly, they were trying to sex this plot line up since there really wasn’t much going in the book compared to the other threads. But this constitutes a major addition, not just a change.

Out of all this, I can see where things are going: John will now be a captive in the Wildlings camp and have to convince them he’s willing to betray his brothers. This was already present in the text, but part of what made it convincing was the fact that John had made a promise to Qorin. What’s more, Qorin died in a staged fight between them, which means they’ll have to find another way to kill him off in the show.

Daenerys plot thread will pretty much resolve itself given what happens next (no spoilers!), but this still feels like a major divergence. And the changes involving Jaime, Robb, and Catelyn will also re-converge with the set storyline easily enough, just the particulars have changed. For example, now it will just be Brienne and Jaime travelling south, which is fine considering that his cousin dies in transit anyway.

So aside from some necessary rescripting, the makers are still being faithful to spirit of the books, if not the word. What’s more, I find myself approving of some of the changes they’ve made. It honestly seems like the writers were looking for more plausible resolutions and explanations in a number of cases, not to mention opportunities to flesh out things which only get mentioned in the text.

And of course, the big battle at King’s Landing is still yet to come. Ohhhh, so exciting!