Good afternoon folks, and welcome back for another Game of Thrones season 3 review! I regret to be bringing you this episode several days after it premiered, but life has been getting busy again. However, since I found myself with a day off, I naturally decided to get caught up on all my unfinished articles, which included a review for the third episode of the third season.

Well, this most recent installment was a bit of a doozy! Bloody, baleful, full of pain and the prospect of rape, and just enough nudity to put you in mind of season one, it really took viewing audiences by storm. Of course, there were also some juicy tidbits that I was waiting on, but also, sadly, some that were left for the next episode and after. And as usual, some changes were made and liberties taken with the text…

The episode opens with Robb Stark and the Tully family attending Catelyn’s father’s funeral. After setting his body down the river, Robb entreats with his uncle, Edmure, who he scolds for violating his plans. Instead of drawing Ser Gregor Clegane (“The Mountain”) towards Riverrun, as he was meant to so Robb could surround him, he instead fought him in the open country. Though victorious, this has deprived Robb of a victory he sorely needed to end the war quickly.

In King’s Landing, Tywin convenes his small council, which consists of Tyrion, Pyter, Cersei, Varys and Pycelle. In addition to discussing the whereabouts of Jaime, Tywin orders Baelish to the Vale to court Catelyn’s sister in the hopes of bringing her into the war on their side. In his absence, Tyrion takes over as Master of Coin, a position he naturally loathes. Luckily, it gives him a chance to repay a debt… 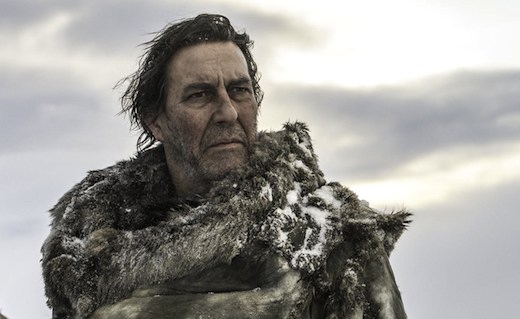 In the North, the Wildlings come up on the Fist of the First Men and find the remains of dozens of horses arranged in the shape of a vortex, but no men. Mance orders Tormund to take a scouting party to the Wall to assess Castle Black’s defenses and order John’s along. He tells them to await his signal for the attack, which will be “the greatest fire the north has ever seen.”

Not far away, Samwell and the surviving brothers have taken up at Craster’s Keep again. Hungry and desperate, Craster is forced to offer them his hospitality, but relations are quite strained due to his usual arrogance. While there, Samwell witnesses Gilly, the young wife he met on the way up, give birth to a son. She and Samwell are both terrified, as they know that this means Craster will offer him to the Others as tribute.

In Astapor, Daenerys witnesses the “Walk of Punishment”, a waterfront display where slaves who have committed acts of defiance are crucified. Ser Mormont and Ser Selmy argue about what course they should take, whether she should take the Unsullied or raise an army the old fashioned way. She opts to buy the Unsullied, and offers them one of her dragons. She gains Missandre as part of the bargain, an Astaporian translator, and confirms from her that the Unsullied are unquestioning.

In between all this, Theon is rescued by the dungeon hand who claimed Asha sent him. After setting him on a horse, he is turned loose and told to head East. However, it’s not long before Theon is captured again by Ramsay Bolton’s men who appear to want to rape him. Theon is then saved by the last minute intervention of a man who kills them all with his bow and then takes him away… 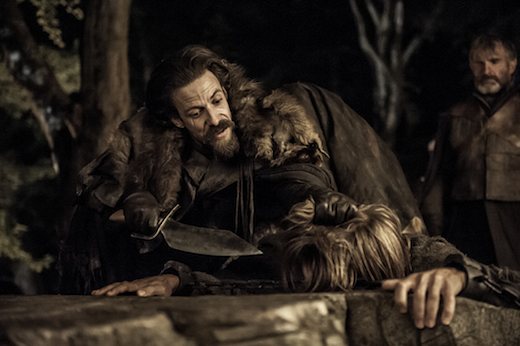 In the Riverlands, Arya, Gendry and Hot Pie are taking to their newfound friends in different ways. Arya feels like a prisoner, by Gendry is working as their blacksmith and Hot Pie decides to stay behind at an inn they were camped at as a baker. Arya and Gendry say goodbye to him and head off on campaign, taking Sandor Clegane (“The Hound”) with them as their prisoner.

Not far away, Brienne and Jaime have been taken captive and being brought to Harrenhal by the Brave Companions (aka. Bloody Mummers). When they make camp, Vargo and his men try to rape Brienne, but Jaime tells them that she’s the daughter of a noble lord and worth her weight in sapphires, but only if she’s alive and unspoiled. That puts an end to all attempts to rape her, but Vargo takes Jaime’s hand when he tries to buy his way out.

Summary:
Like I said, I was waiting on the Jaime dismemberment scene, and it was predictably, hard to watch! And yet, I much missed the parts I was really hoping for, like when (spoiler alert! spoiler alert! spoiler alert!) and there’s a terrible mess to clean up afterwards. Now that was good plot development! Alas, I lament that I will have to wait on these tidbits, as they shall prove quite awesome I suspect!

Other points of interest in this episode included Tyrion’s visit to the whorehouse with Pod, whom he repaid in kind for saving his life by purchasing an evening with not one, not two, but three ladies of the evening! And yet, when Podrick is finished, he returns home with Tyrion’s bag of coin still in hand. Completely flabbergasted as to why Pyter’s ladies would not accept payment, he and Bronn sit Pod down, give him wine and demands he recount his visit, in gratuitous detail.

I also liked what they did with Robb’s return to Riverrun, as it was fitting to the story in a lot of respects. The details of how Edmure Tully screwed up, how Catelyn mourned her father, and how broken up she was for the sake of her boys were all well conveyed and true to the text. And Arya’s thread, though brief, was faithful enough while still getting in the main points. But they do need to introduce the Brotherhood’s red priest at some point, otherwise they’ll be glossing over an important point…

And let’s not forget the key lines of dialogue which made it in directly from the book. These included Mormont’s assessment of Rhaegar Targaryen’s end: “Rhaegar fought valiantly. Rhaegar fought nobly. And Rhaegar died.” Or Mance Rayder’s declaration: “I’m going to light the biggest fire the north has ever seen!” As a Thrones nerd, those lines could only resonate with me… and they did!

Otherwise, this episode did seem a bit quick and sparing in a lot of respects. While some threads got a good dose of development, others, like John Snow’s were once again quick and sparse. For example, in the north, when they came upon the Fist of the First Men, there was plenty more happening than was shown here. And if they continue to move along as they have with this thread, a good deal of really decent material will be lost.

For starters, Mance was angry when they found traces of a large Night’s Watch force, mainly because John never told him about it. Mance then accused John of playing him and was ready to have him killed, but his hand was stayed by Ygritte who vouched for his loyalty. I shall not say more, as the details of that are spoiler related. Suffice it to say, this all took place before he was sent off to the Wall, so we shall see how that plays out. But rest assured, this is another point that they cannot expect to gloss over easily…

Last, there’s Theon’s thread, which is going in an odd direction. In the books, this was not mentioned until book five, as I’ve said. But there, he was never rescued while attempting to flee. So if he’s safely away, this represents a major plot twist that is way off script! In fact (spoiler alert! spoiler alert!)… but that can easily be corrected with a few more lines of dialogue and another plot twist.

All in all, a pretty good episode, better paced and more thorough than the previous two. And there’s plenty more to be had. I just hope they remain true and faithful, because what happened next was pretty damn badass!