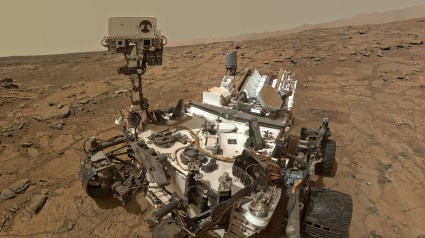 In this latest video update from the Mars Science Laboratory team, Ashwin Vasavada, the mission’s Deputy Project Scientist, discusses the recent findings by the Curiosity Rover. As always, these include ongoing studies of Mars atmosphere, in addition to soil and rock analysis, to determine what the Martian landscape may have looked like millions of years ago.

And in its latest research breakthrough, the rover has determined that Mars doesn’t have the same atmosphere it used to. Relying on its microwave oven-sized Sample Analysis at Mars (SAM) instrument, the rover analyzed a sample of Martian air early in April, and the results that came back provided the most precise measurements ever made of in the Martian atmosphere.

What it noticed in particular was the isotopes of Argon, a basic element that is present in Earth’s atmosphere, Jupiter’s and even the Sun. In Mars case, the mix of light and heavy Argon – two different isotopes of the element – is heavier than in all the other cases. What this suggests is that the Martian atmosphere has thinned over the course of the past few million years.

This data conclusively confirms another long-held suspicion by scientists, that Mars did indeed have an atmosphere capable of supporting life. Alongside the voluminous evidence obtained by Curiosity for the existence of water, we now know that Mars may have supported life at one time, and that it did not always have the arid, cold climate it now does. More good news for those looking to build a case for settling there one day…

Check out the video below to hear Ashwin Vasavada speak about these latest findings, including the Solar Conjunction which kept them from communicating with the Rover until today. Now that the conjunction has ended, we can expect plenty more updates and interesting finds from the rover. Who knows? Maybe even some evidence about the existence of a Martian civilization.

Don’t be looking at me like that! It could happen…

5 thoughts on “News from the Red Planet: Mars’ Bygone Atmosphere”