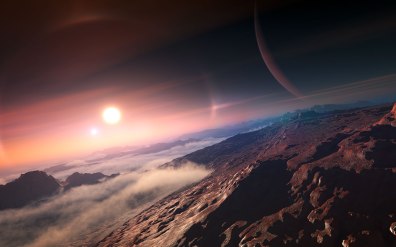 People who follow this blog may recall how, recently, I posted a story about Uwingu, a non-profit organization that sells the naming rights to exoplanets and (now) Martian craters. Well, as I explained in that last post, it’s not so much a matter of naming rights as naming suggestions, ones which are then voted on and then made into a crowdsourced map of an extra-terrestrial planet or the stars.

Far from this being some kind of scam or false promise, Uwingu does this in order to spur public participation in space exploration, and uses half of the proceeds to fund scientific research. After reading up on what they do and what the process for it all is, I began to think it might be fun for my writer’s group to pitch a suggestion of their own.

For some time, we’ve been working on the Yuva Anthology – a series of shorts that tell the story of a future colonization effort on Gliese 581g. Not only is the planet real, but it was considered by NASA to be the most Earth-like exoplanet yet discovered in the known universe. So naturally I wondered, what if we voted to name it Yuva?

And now it’s been done! Uwingu has received my suggestion (and payment for the transaction), and printed me out the certification of authorization that you see below. Now all we need is people willing to spend $0.99 to make it a reality. Simply click here, select the name Yuva from the list, and confirm your payment of ninety-nine cents – but only if you’re comfortable doing so of course.

Also, for those who’ve got a pile of digital currency just burning a hole in their accounts, be advised that you can vote as many times as you want. As the saying goes “vote early, vote often!” Just keep in mind that have to pay $0.99 each time you do. Unlike naming rights, there’s no bulk discount to be had here. That seem right to you?

Thank you in advance to anyone who supports this project and helps to make it a reality! And I do sincerely hope myself and my group can get the anthology out by this summer. It’s been a long haul, and coordinating the efforts of over a dozen writers is difficult at the best of times! Until next time, keep your eyes on the stars!