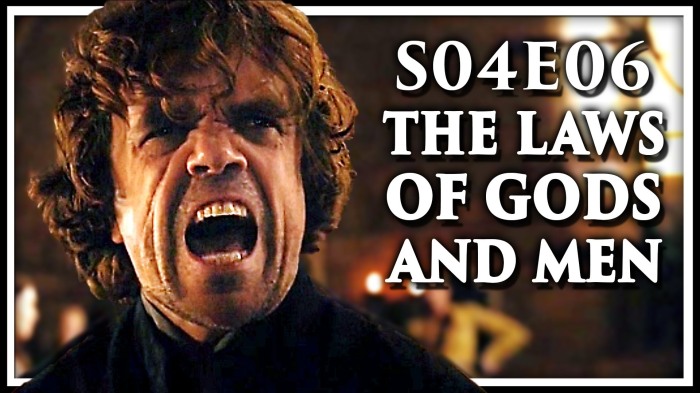 To quote Tyrion Lannister: “I’ve decided I don’t like riddles.” Well, much the same applies to me and how this season is turning out. Between the way they have been choosing to skim things down, leave things out, and make serious changes from the original text, I’m beginning to find Season Four rather disappointing. And this week’s episode reinforced that in many ways. Basically, I’ve decided that I don’t like it, at least not nearly as much as the previous seasons.

To be fair, this week’s episode promised some serious elements – i.e. trial of Tyrion Lannister and the many machinations and intrigues it brings to the fore – which it did deliver on. Watching it was certainly enjoyable, I liked what they did with it, and it was largely true to the original material. However, highlights like this have been few and far between this season, which otherwise seems to be made up of filler and diversions that serve little purpose except to keep things going at this point.

Basically, I am waiting eagerly for this season to wrap up so we can finally see the cool stuff that the latter half of A Storm of Swords provided. And then, maybe they can get things back on track with Season Five, which will have two books as source material, and can be parceled out in a decent fashion, without the need for lots of filler and needless changes. Alas, here’s what happened this week…

The Laws of Gods and Men: 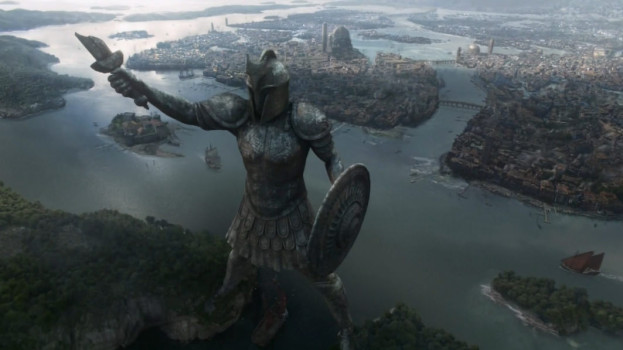 The episode opens in Bravoos, where Stannis and Lord Davos arrive to meet with representatives of the Iron Bank. After tallying Stannis’ own assets and his chances of taking the throne, they refuse to back his claim. However, Davos tells them that Stannis’ is the only one who is likely to settle the Throne’s debts since Tywin will die someday and no one trustworthy is fit to replace him. He then shows them how Stannis took each of the fingers on his right hand to the first knuckle, as payment for his years of smuggling.

Davos finds Sallador Saan, his old pirate friend, in a brothel and gives him his pay, letting him know that he is once again in Stannis’ employ. They set out to Dragonstone again to continue plotting the war. Meanwhile, Yara Greyjoy arrives at the Dreadfort to rescue Theon, who is being kept by Ramsay in the kennels with his dogs. In the course of trying to rescue him, Theon refuses to go, thinking its another one of Ramsay’s tricks, and Yara is chased off by Ramsay’s dogs. 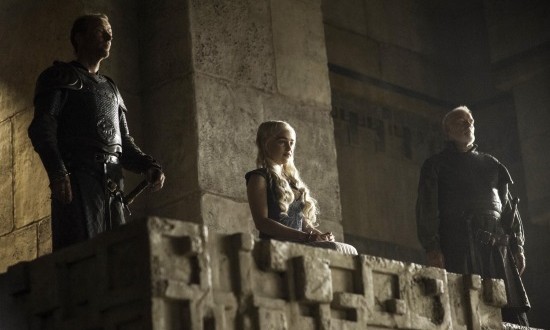 In Mereen, Daenerys’ is settling into her role as queen and is busy taking requests from supplicants. She learns that her dragons are causing trouble in the countryside for herders, another indication that they are growing uncontrollable. She is then is met by Hizdarh zo Loraq, an old Ghiscari noble, who implores her to let him bury his father, one the master’s she had crucified. She obliges him, giving him permission to bring his father’s remains down and bury him in the Temple of the Graces.

At King’s Landing, the high council meets and discusses Daenerys’ ongoing campaign and the Hound’s appearance in the Riverlands. Shortly thereafter, Tyrion’s trial begins and he is brought before his judges – Lord Tywin, Lord Mace Tyrell, and Prince Oberyn. The witnesses speak against him, beginning with Ser Meryn Trant and Grand Maester Pycelle, the latter of whom accused Tyrion of stealing poison from his stores, and shows them the necklace used to administer it.

Cersei follows, and tells them of the threats Tyrion made to her and her son before the Battle of Blackwater Bay. Varys is next, who claims that Tyrion not only threatened Joffrey at a meeting of the Small Council, but that he openly expressed sympathy towards the northern cause and Robb Stark’s death due to his marriage to Sansa. Tyrion tries to sway him, reminding him of how Varys told him he saved the city, but to no avail.

During a break, Jaime pleads with his father for Tyrion’s life, and offers to leave the Kingsgaurd and become his father’s rightful heir. Tywin agrees, and claims that when the guilty verdict is rendered, he will give Tyrion the option of joining the Night’s Watch. When the trial resumes, Shae is brought forward and speaks against Tyrion, saying that he Sansa planned it together. Tyrion becomes enraged by this, and demands a trial by combat.

Summary:
I’ll start with the good points. Tyrion’s trial was well done, with Peter Dinklage once again capturing the pain and angst that Tyrion so often bears, but which was especially poignant at this part in the story. And they certainly covered the bases, showing how at this point, everyone was lining up to turn against Tyrion, either for their own personal reasons, or because they knew full well that Cersei would see him dead no matter what.

They changed a few things, like in how they gave Shae additional motivation for turning on him (how Tyrion spurned her). Also, Tyrion did not ask for a trial by combat out of anger. It was something that was prearranged at this point in the trial because he knew he was going to lose. And Jaime never tried to sway his father’s judgement by offering to leave the Kingsgaurd. But this really didn’t matter, as it didn’t affect the flow of things or reduce the impact of it.

But outside of that, there was little about this episode I liked. To start, Stannis never went to Bravoos to implore them for money. An arrangement was struck between them later, but that’s two whole books from now. The only reason to do it now was to keep Stannis and Davos in the story, since otherwise, they would have nothing to do. And once again, Daenerys’ part seems like mere window-dressing, with her doing day-to-day stuff and only hearing about major developments.

Basically, they’ve run out of material for her after all her major battles, so now they are just panning to her from time to time to show that she’s still relevant. But these were all minor issues compared to the confrontation between Yara Greyjoy and Ramsay Snow. While Asha (that’s her real name, once again changed to avoid confusion) did meet up later in the story, it was not at the Dreadfort and it wasn’t as a result of a rescue attempt. 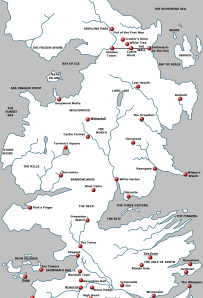 What they did in the show, by comparison, was completely superfluous and insipid. One, this never happened in the books. Like just about everything else they are doing this season with Stannis and Jon Snow, it’s just to keep the characters involved and off script. Two, the Dreadfort is an inland place on the other side of northern Westeros – which would make it unreachable to Yara (Asha) unless she had been at sea for months and sailed all the way around the south and back up (see the map at right).

In reality, Asha was at Moat Cailin at the time, which is reachable from the Iron Islands, and stayed there until much later. She had no reason to go forth to the Dreadfort because eveyone assumed Theon had died in the siege of it. Ramsay was keeping Theon as a prisoner and torturing him, but did not castrate him, nor send the remains of his “favorite toy” off to threaten the Iron Islanders. What began as an attempt to keep him in the story has become totally superfluous.

But above all was the ridiculous way the confrontation ended. After sailing halfway around Westeros, storming the Dreadfort and killing a dozen or so guards, Asha turned tail and ran because… Ramsay let loose a bunch of dogs? And then she just runs back to her boat and says her brother is dead (hurray for metaphors)? C’mon, really?! The Iron Islanders who put it all the line to rescue their prince and their honor ran away because said prince was freeaking out and because a pack of wild dogs?

And I thought the bit where Bran, Hodor and the Reeds showed up at Craster’s Keep at the same time as Jon and then avoided him completely was contrived. But this was way worse! It wasn’t just contrived, it was stupid, and about the weakest way to end this totally unnecessary thread. The only saving grace is that it seems like these threads – Stannis looking for money, Theon’s captivity, and Jon Snow looking for his siblings – are coming to an end. I hope so, at least!

Okay, just four more shows to go. And one can only hope they’ll stick to the script and keep to the stuff that’s actually interesting. Not only is this trial going to end on an exciting note (and result in some pretty serious shit going down) there’s still the Wildling’s coming assault on the Wall, which . Please tell me we’ve covered the filler from this season and are moving on now!