In the course of the past century, science fiction has provided us with many interesting visions of what the future of transportation will look like. And whereas not long ago, many of these seemed like hopeless fantasy – such as the failure of flying cars or robotic automated vehicles to become a reality by 2000  – recent years and developments have seen reality slowly catching up.

Case in point, last year, the European company named “2GetThere” installed a small fleet of automated podcars (aka. robotaxis) in the eco-friendly community of Masdar City. Similarly, the town of San Jose began work on the Personal Rapid Transit System – a series of on-call, point to point transit cars designed to replace the town’s system of taxis and buses, providing an environmentally friendly alternative to traditional mass transit. 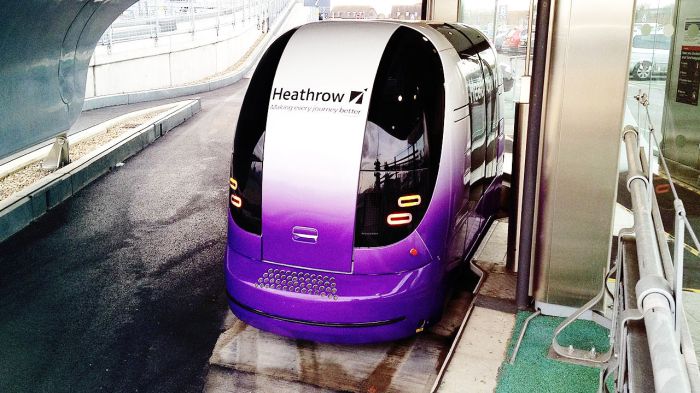 And most recently, the town of Milton Keynes – a sleepy city north of London – that is planning on conducting a podcar system trial run by 2015. Similar to the system at Heathrow Airport, which uses 21 on-call podcars on a  4 km (2.5 mile) stretch of track, the system will consist of a series of pods that will be able to carry two passengers, plus baggage, from the town’s train station to its downtown offices and the shopping district.

Milton Keynes’ plans is much more ambitious, calling for a fleet of 100 vehicles that will travel with far ore independently, albeit in a designated lane with curbs. The trial will assess safety and how people (and animals) react to them. The pods travel at up to 19 km/h (12 mph) and will contain GPS, cameras, and sensors to ensure they don’t crash into anything.

And if all goes well, the system will be adopted by 2017 and residents will pay little more than a bus fare ($3.20) to travel in automated luxury. Purpose-built in the 1960s, Milton Keynes has an unusual grid layout that makes it an ideal testing ground for a plan that other British cities are seriously considering. Given the dual issues of congestion and pollution in British cities, a system of robotaxis seems like the perfect solution.

In fact, such a solution is ideal when it comes to all major cities around the world. The state of robotics, automation, centralized grids, and the reduced impact electrical transit has compared to gasoline-powered cars and buses, we could be looking at a world where every major city has its own system of robotaxis in the near future.

And I imagine a massive grid of Hyperoops lines will be connecting every major city… The future is likely to be mighty cool! In the meantime, enjoy this video of Heathrow’s podcar system in action: 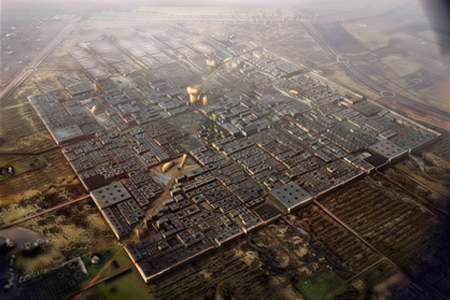 Imagine a city that runs entirely on solar energy and other renewable energy source. A city that generates entirely no carbon and no waste, with mass transit that relies on electronic, computer-controlled pod cars. That is the concept behind Masdar City, a planned urban environment located 17 km south-east of the capital of the United Arab Emirates (Abu Dhabi).

Designed by the British architectural firm Foster and Partners, and with the majority of the seed capital coming from the government of Abu Dhabi, Masdar is a blueprint for future cities based on sustainability, clean energy, and the latest and best in manufacturing, recycling and waste management technology. On top of that, it will contain some of the most advanced facilities in the world, dedicated to science, commerce and eduction.

In essence, it is the answer of what to do about rapidly advancing technology, urban growth, and development in the developing world. Point of interest include:

Wouldn’t you know it? At the heart of a city based on sustainability and clean energy is an institute dedicated to the furtherance of these very things. Known as the Masdar Institute of Science and Technology (MIST), this research-oriented university was developed in conjunction with the Massachusetts Institute of Technology and focuses on the development of alternative energy, sustainability, and the environment. 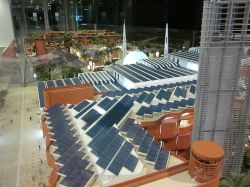 In addition to its planned 40 to 60 megawatt solar power plant, which will power further construction projects, with additional solar panels to  be placed on rooftops, for a total output of 130 megawatts. In addition, wind farms will be established outside the city’s perimeter capable of producing up to 20 megawatts, and the city intends to utilise geothermal energy as well.In addition, Masdar plans to host the world’s largest hydrogen power plant, a major breakthrough in terms of clean energy!

Water Management:
When it comes to water consumption, that too will be handled in an environmentally-friendly way that also utilizes solar energy. At the hear of this plan lies a solar-powered desalination plant. Approximately 80 percent of the water used will be recycled and waste greywater will be reused for crop irrigation and other purposes.

Waste Management:
As already noted, the city will also attempt to reduce waste to zero. Biological waste will be used to create nutrient-rich soil and fertiliser, and plans exist to incinerate it for the sake of generating additional power. Industrial waste, such as plastics and metals, will be recycled or re-purposed for other uses. The exterior wood used throughout the city is Palmwood, a sustainable hardwood-substitute developed by Pacific Green using plantation coconut palms that no longer bear fruit.

Initially, the planners for Masdar considered banning the use of automobiles altogether, focusing instead on mass transit and personal rapid transit (PRT) systems, with existing road and railways connecting to other locations outside the city. This systems utilize a series of podcars, designed by the company 2getthere, contains 10 passenger and 3 freight vehicles and serves 2 passenger and 3 freight stations connected by 1.2 kilometers of one-way track.

The cars travel at an average of 20km/h (12mph), trips take about 2 and a half minutes and are presently free of charge. Last year, a system of 10 Mitsubishi i-MiEV electric cars was deployed as part of a one-year pilot to test a point-to-point transportation solution for the city to complement the PRT and the freight rapid transit (FRT).

Summary:
Given the mounting environmental crisis this planet faces, cities like Masdar may very well be the solution to future urban planning and expansion. But of course, as an incurable sci-fi geek, I also consider cities like this to be a handy blueprint for the day when it comes time to plan extra-solar and even exoplanet settlements. Not only are they effective at curbing our carbon footprint and environmental impact, they are also a  good way to start over fresh on a new world!

Fans of Total Recall may recall the Johnnycab, a robot taxi service that helped Arny get to where he was going and flee his armed assailants. Well, as it turns out, personal automated podcars (aka. robotaxis) are not a thing of the future anymore. Yes, as it turns out, Masdar City in the United Arab Emirates has a taxi service that consists of a small fleet of autonomous taxis which run entirely on electricity.

Invented by a European company named “2GetThere”, the service accommodates somewhere in the vicinity of 25,000 people per month. As part of the growing project to create a self-sustaining city that runs on clean, renewable energy, these rails are consistent with the city’s ethos and are expected to pave the way for clean mass transit. Best of all, the 2GetThere models don’t have weird-looking animatronic robot busts sitting in the front seat to creep you out and provide needless comic relief! 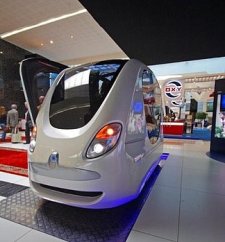 But of course, the UAE is not the only place where robotaxis can be found, nor is 2GetThere the only company investing in this revolutionary technology. In San Jose, the so-called “Capital of Silicon Valley”, similar efforts are being made to create clean, sustainable transportation. In this case, it takes the form of the Personal Rapid Transit System; or as it is more widely known, Podcars.

The system involves a series of on-call, point to point transit cars which move about on main lines and intermediate stations to find the quickest route to a destination. Under normal conditions, this means of transit has been shown to be faster than other forms of mass transit or automobile. The “matrix”, or looped layout structure of the network, allows for high-volume and is also expected to lessen the burden on conventional transit systems.

Granted, both networks are in their infancy, but both the science and the planning behind them is sound and expected to take off in the near future. Much like mag lev and light rail train systems, they are part of a growing Eco-friendly attitude towards city planning and mass transportation which is anticipated to become the mainstay of urban development and renewal in the 21st century.

And of course, Google and other companies are also hard at work trying to bring us other designs and concepts. Amongst them are true self-driving cars, the kinds that may very well involve robot drivers. But in all likelihood, these will take the form of truly “smart” cars – i.e. the kind that can guide themselves, pick optimal routes, and avoid accidents and traffic congestion. Sad to think that the days of driving might actually be coming to an end. But hey, at least we might save the planet in the process!