Always good to start with a classic, don’t you think? Especially one that really doesn’t get the attention it deserves. In addition to being Japan’s first cyborg superhero, this 60’s anime character was also the inspiration for Robocop. You heard me right!

Apparently, the main character was a Detective who was murdered by a group of ruthless criminals, but whose body was retrieved by a scientist who conducted an experimental procedure to transfer his “life force” into a machine body. Having failed the previous seven times, his eights and successful attempt is aptly named “8 Man”.

But unlike Robocop, this cyborg can do some pretty freaky stuff! In addition to being heavily armored, he can run at incredible speeds and shape-shift into other people. His true identity is kept a secret from everyone except his old police chief and the professor who conducted his experiment.

But like Robocop, 8 Man chooses to go beyond his crime-fighting mandate to find his old girlfriend, best friend and attempt to rebuild his old life. His attempts are often marred by the fact that he is no longer human, but as they say, it’s the journey that counts!

Sure, Steve Austin was pretty cool, but did he look this good? Hell no! And in the case of the Bionic Woman, the hero story was far less crude. Though the original series was little more than a spinoff of The Six Million Dollar Man (featuring Oscar Goldman as the scientist again), the re-imagined series was far more original and endearing.

In this version, the main character (again named Jaime Sommers) is a surrogate mother and bartender struggling to make ends meet. After a near fatal car accident, she is saved by an experimental procedure involving advanced prosthetics and implants (no, not those kind!). Afterwards, she goes to work for the people who performed her operation – the Berkut Group, whom he boyfriend works for.

Through her work, she is responsible for thwarting crimes and evil machinations, while trying to explore her role and the changes she’s endured. As with the original series, Jaime’s modifications include bionic legs, a bionic right arm, a bionic right ear, and a bionic eye like that of Steve Austin. In the updated series, she also gets a dose of nanomachines called “anthrocytes” which are capable of healing her body at a highly accelerated rate.

Now here is a race who’s name is the second half of Cyborg! No chance for misunderstandings here! And as all fans of Star Trek know, the Borg are extremely proud of what they are. A race of beings dedicated to the perfection of life by merging the organic with the synthetic. And of course, they are all networked to a hive mind known as “the collective.”

Native to the Delta Quadrant of the Star Trek universe, the Borg occupy thousands of systems and hundreds of races. No indication is ever given where they originated from or what their intentions are, beyond adding “the biological and technological distinctiveness of other species to [their] own” in pursuit of “perfection”.

Is there a more perfect metaphor for runaway progress and the deification of technology? It’s not exactly a subtle commentary on the issue, but it does encapsulate the kinds of fear many people have when faced with a rapidly changing world that seems to be growing more complicated all the time. I imagine the Singularitarians don’t like the analogy much, but then again, Star Trek has been known to send mixed messages 😉 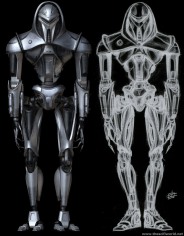 In the original series, the Cylons were lumbering, chrome covered robots that kind of resembled toasters. It was for this reason that they frequently got a shout out in the re-imagined by being referred to as such. However, the re-imagined versions were quantum leaps ahead, the result of bioengineering rather than conventional robotics.

Unlike the “skin jobs” (a reference to Blade Runner), Centurions and Cylon Raiders were only partially organic, consisting of organic brains inside machine bodies. Much the same is true of the Cylon Hybrids, the minds that operated their Basestar’s jump systems. In their case, their bodies are largely organic, but their minds are enhanced with advanced machinery and networked into their ship.

Because of this combination of organic and synthetic, Centurions and Raiders are capable of being “lobotomized”, which took place in the third season when their handlers became suspicious of their behavior. Ultimately, these three begins represented a key step in the Cylon’s evolution from mechanical to biological, which achieved perfection with the creation of the seven purely biological models.

A fictional race taken from Dr. Who, these cyborgs were another one of the good Doctor’s recurring enemies. But unlike their Dalek counterparts, they seemed to change with every appearance. A possible inspiration for the Borg, these being were as humans who chose to begin experiment more and more with artificial implants.

This eventually led them to become the cold, calculated and ruthlessly logical beings that are, with every emotion all but deleted from their minds. While they do maintain their human brains and some human organs, they possess little of their original humanity, which is why they don’t get along with us decent folk!

Another parallel they share with the Borg is their means of proliferation, which is to turn other organic beings into Cybermen (a process known as “cyber-conversion”). However, they remain few in number during the course of the series and therefore prefer to act covertly, conducting their schemes from hiding places and using human pawns or robots to act in their place until they need to appear. Quite unlike the Borg, who prefer to get right in there, blow shit up, and assimilate anything that’s left!

“He’s more machine than man… twisted and evil!” That’s not to say all people who are more machine than man are evil! But it is the working definition of “cyborg.” Having lost both arms and legs in lightsaber duels and much of his body severely burned, Darth Vader (nee Anakin Skywalker) had to be put in a protective suit that regulated his breathing and bodily functions… I don’t even want to think about that!

But there was an upside to all those enhancements. For one, he got James Earl Jones vocals and the most intimidating, badass exterior in the Galaxy! Hell, even his breathing sounded scary. And it didn’t encumber his use of the Force at all, as exemplified by his ability to crush throats and toss objects around at will. And the ghosts of many dead Jedi and Luke’s missing hand can attest to it not hampering his sword fighting skills either.

Ultimately, this suit proved to be his undoing when, in the course of betraying his evil master, most of its circuits were fried by the Emperor’s electrical bolts. He died shortly thereafter, redeemed and looking upon his son for the first time “with his own eyes.” Sniff… I hate this mushy stuff! 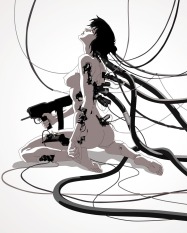 The star of Ghost in the Shell, the beautiful, deadly and artificially enhanced Motoko Kusanagi. Known by her fellow officers as “the Major”, Kusanagi is a member of Section 9, a counter-terrorism squad working for Japan’s National Public Safety Commission. As part of her commitment to her job, Kusanagi underwent cybernetic enhancements, marrying her human brain to the “shell” that is her new body.

Throughout the original manga, anime and cinematic versions, Kusanagi’s basic role is the same. She fights all kinds of criminal elements: kingpins, warlords, and cyber terrorists, but also uses these experiences to reflect on the larger issues and her fateful choice to become a cybernetic being. These issues include what it means to be human, what constitutes life, and the line between authentic and artificial.

In addition, she’s also a pretty vivacious and good-looking being! Though technically not flesh and blood, she still maintains a pretty active sex life, at least in some versions of the story. In others, her personal life is not dealt with, but there are still plenty of nude shots, provided exposed synthetic flesh can be counted as nudity 😉

Here we have another case of tragedy yielding the perfect union between man and machine. Alex Murphy, dedicated cop and family man, gets ruthlessly gunned down by a bunch of criminal thugs, only to be resurrected by a bunch of corporate thugs as a cop cyborg. Heavily armed, armored, and programmed to serve and protect, he became the Detroit Police Departments signature weapon in the war on crime.

But of course, things begin to go awry when Murphy’s memories and personality began to re-emerge. For one, there was the question of his wife and son, both of whom had been led to believe he was dead. Second, there was the psychological and emotional strain of knowing you could never be fully human again.

Alas, Murphy resolves the sacrifice of his identity and humanity by doing what he did best, kicking criminal ass and taking criminal names! These of course included crime lords, drug bosses, and the thugs who murdered him, but also the corporate crooks who created him and were plotting to take over Detroit. So aside from the sci-fi elements and human interest angles, there was also some social commentary in this franchise. Lots going on here!

“If we gift them with a past, we create a cushion or a pillow for their emotions, and consequently, we can control them better.” What is a machine when it has feelings, thoughts, and even memories?  Is it, as the Tyrell Corporation motto goes, “More human than human”?

Sure, some purists would say that a Nexus 6 isn’t technically a cyborg. But as I recall, the working definition of Cyborg is a merger of the cybernetic and organic. And as any fan of Blade Runner knows, Nexus 6’s are not so much built as grown, the product of biomedics rather than mechanics. And if that’s not good enough to get this one past the censors, screw em! Moving on…

Designed for service on the off-world colonies, every Replicant was designed to fill a certain role, ranging from military, to worker, to pleasure. In short, they could do the work of any human while simultaneously being denied the basic rights humans take for granted. However, since it was understood that they could become unruly after too much time, each unit was built with a four-year lifespan.

Inevitably, the Replicants of the movie came to Earth seeking a reprieve from their inevitable deaths. Their leader, Roy Batty, was especially obsessed with buying more time, since he himself was near the end of his lifespan. When told that there was nothing that could be done, he went a little beserk, but also came to appreciate life all the more in his last few moments.

Designed to impersonate human beings, mainly so he could get close to them and kill them, the two Arny models were quite at home in the past. If you looked like this, would anyone really complain if you chose to walk the streets of LA naked? It’s LA man, anything goes! What’s more, Arny’s cyber strength and tough skeleton make him deadly and very survivable.

This proved quite the headache when one was sent back to kill Sarah Conner, but was quite a plus when one was later providing protection for her and her son! In the end, it took a hail of bullets, some well placed plastic explosives and a machine press to kill the first one. And the second one managed to survive an impalement, the loss of a limb, about a million bullets, and still managed to lay the smack down on a T-1000. Perhaps they should amend the name… Endurinators!

Thank you all! Stay tuned for the follow-up, Sexy Female Robots! I guess I’m just in a robot kind of mood 😉