As if it weren’t bad enough that they are replacing workers here on Earth, now they are being designed to replace us in space! At least, that’s the general idea behind Google and NASA’s collaborative effort to make SPHERES (Synchronized Position Hold, Engage, Reorient, Experimental Satellites). As the name suggests, these robots are spherical, floating machines that use small CO2 thrusters to move about and performing chores usually done by astronauts.

Earlier this month, NASA announced it’s plan to launch some SPHERES aboard an unmanned Cygnus spacecraft to the International Space Station to begin testing. That launch took place on July 11th, and the testing has since begun. Powered by Tango, Google’s prototype smartphone that comes with 3D sensors that map the environment around them, the three satellites were used to perform routine tasks. 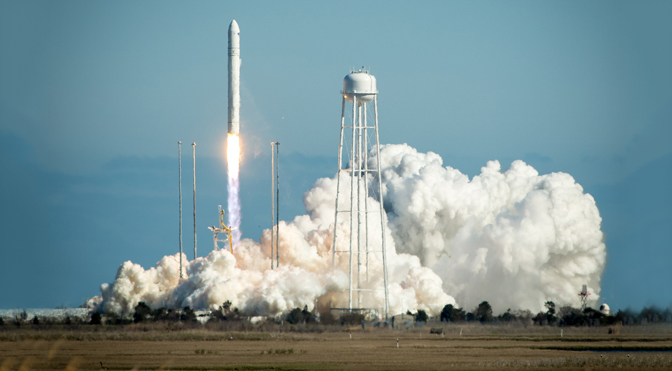 NASA has sent SPHERES to the ISS before, but all they could really do was move around using their small CO2 thruster. With the addition of a Tango “brain” though, the hope is that the robots will actually be able to assist astronauts on some tasks, or even completely carry out some mundane chores. In addition, the mission is to prepare the robots for long-term use and harmonized them to the ISS’ environment.

This will consist of the ISS astronauts testing SPHERES ability to fly around and dock themselves to recharge (since their batteries only last 90 minutes), and use the Tango phones to map the Space Station three-dimensionally. This data will be fed into the robots so they have a baseline for their flight patterns. The smartphones will be attached to the robots for future imaging tasks, and they will help with mathematical calculations and transmitting a Wi-Fi signal.

In true science fiction fashion, the SPHERES project began in 2000 after MIT professor David W. Miller was inspired by the “Star Wars” scene where Luke Skywalker is being trained in handling a lightsaber by a small flying robot. Miller asked his students to create a similar robot for the aerospace Industry. Their creations were then sent to the ISS in 2006, where they have been ever since.

As these early SPHERES aren’t equipped with tools, they will mostly just fly around the ISS, testing out their software. The eventual goal is to have a fleet of these robots flying around in formation, fixing things, docking with and moving things about, and autonomously looking for misplaced items. If SPHERES can also perform EVAs (extra-vehicular activity, space walks), then the risk of being an astronaut would be significantly reduced.

In recent years there has been a marked shift towards the use of off-the-shelf hardware in space (and military) applications. This is partly due to tighter budgets, and partly because modern technology has become pretty damn sophisticated. As Chris Provencher, SPHERES project manager, said in an interview with Reuters:

We wanted to add communication, a camera, increase the processing capability, accelerometers and other sensors [to the SPHERES]. As we were scratching our heads thinking about what to do, we realized the answer was in our hands. Let’s just use smartphones.

The SPHERES system is currently planned to be in use on the ISS until at least 2017. Combined with NASA’s Robonaut, there are some fears that this is the beginning of a trend where astronauts are replaced entirely by robots. But considering how long it would take to visit a nearby star, maybe that’s not such a bad thing. At least until all of the necessary terraforming have been carried out in advance of the settlers.

So perhaps robots will only be used to do the heavy lifting, or the work that is too dull, dangerous or dirty for regular astronauts – just like drones. Hopefully, they won’t be militarized though. We all saw how that went! And be sure to check out this video of SPHERES being upgraded with Project Tango, courtesy of Google’s Advanced Technology and Projects group (ATAP):

Commercial space flight got a shot in the arm just two days ago thanks to the flawless launch of the privately developed Antares rocket from the NASA Wallops Flight Facility in Virginia. On board was the first of many Cygnus craft, a commercial unmanned cargo resupply vehicle that is now making its way to the ISS in orbit. It was a day of firsts, and signaled the beginning of a new space race.

For starters, it was the first time the launchpad in Virginia was used, not to mention the maiden flight of a Cygnus craft. But perhaps most importantly, it was the first time in a long time that supplies and equipment were bound for the International Space Station from American soil. Since its cancellation in 2011, NASA’s space program has been forced to rely on the Russians and an aging fleet of Soyuz rockets to send astronauts and supplies into orbit.

And, as already noted, it was a big day for commercial space flight, since both the Antares and the Cygnus were produced by the Orbital Sciences Corporation. For some time now, SpaceX has been leading the charge to develop rockets and spacecraft for private commercial use. Now, with NASA awarding OSC contracts to restore America’s ability to mount resupply missions, it seems they might have some competition.

The “picture perfect” blastoff took place at 10:58 a.m. EDT on the morning  of Sept. 18 from Virginia and was witnessed by a large crowd of spectators. The launch was reported as being incredibly beautiful as the rockets two stage engines spewed intensely bright flames and send out reverberations that wowed the people watching and woke people who were still asleep in the nearby community of Chincoteague. 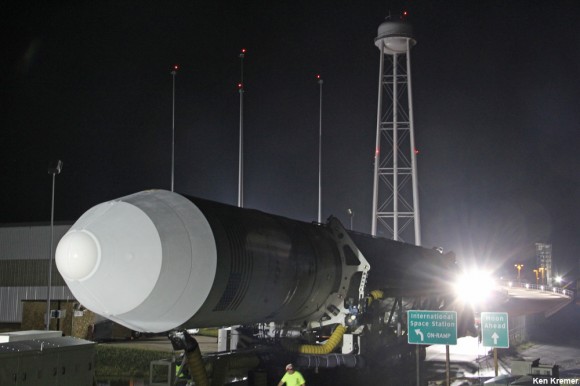 Another historic first that bears mentioning is the fact that this latest mission happens to be the heaviest cargo load ever delivered to the ISS by a commercial vehicle. And by awarding contracts for such missions to private companies, NASA hopes to be able to free more of its budget up for long-term missions. These include exploration beyond low earth orbit, getting people back to the Moon and beyond to deep space destinations including Asteroids and Mars.

NASA Administrator Charles Bolden spoke glowingly of the launch in a statement and praised OSC for their role in making it happen:

Today marks a milestone in our new era of exploration as we expand the capability for making cargo launches to the International Space Station from American shores.  Orbital’s extraordinary efforts are helping us fulfill the promise of American innovation to maintain our nation’s leadership in space.

According to ongoing mission updates, the Cygnus spacecraft successfully unfurled its solar panels starting 1.5 minutes after separation from the second stage, which took place about 10 minutes after launch. Currently, Cygnus is traveling at 28,000 km/h (17,500 mph) and will rendezvous with the space station on Sunday, Sept. 22.

Once there, the cargo vessel will deliver about 590 kilograms (1,300 pounds) of cargo, including food, clothing, water, science experiments, spare parts and gear to the Expedition 37 crew. The flight, known as Orb-D1 is a demonstration mission to prove that Cygnus can conduct a complex series of maneuvers in space safely bringing it to the vicinity of the ISS.

And once the mission is complete and the supplies delivered, we can expect to be hearing about more missions like this one! Between SpaceX’s Dragon module, the Cygnus, and both companies ongoing rocket tests, space will is likely to become the new frontier where private enterprises carry out their endless dance of competition.

And of course, there are some cool videos of the launch to behold. So behold!