SpaceX’s latest delivery to the International Space Station – which was itself pretty newsworthy – contained some rather interesting cargo: the legs for NASA’s robot space station helper. Robotics enthusiasts know this being as Robonaut 2 (R2), a humanoid robot NASA placed on the space station to automate tasks such as cleaning and routine maintenance. Since its arrival at the station in February 2011, R2 has performed a series of tasks to demonstrate its functionality in microgravity.

Until now, Robonaut navigated around the ISS on wheels. But thanks to a brand-new pair of springy, bendy legs, the space station’s helper robot will now be able to walk, climb, and perform a variety of new chores. These new legs, funded by NASA’s Human Exploration and Operations and Space Technology mission directorates, will provide R2 the mobility it needs to help with regular and repetitive tasks inside and outside the space station. The goal is to free up the crew for more critical work, including scientific research.

NASA has explored with robots for more than a decade, from the stalwart rovers on Mars to R2 on the station. Our investment in robotic technology development is helping us to bolster productivity by applying robotics technology and devices to fortify and enhance individual human capabilities, performance and safety in space.

Taking their design inspiration from the tethers astronauts use while spacewalking, the legs feature a series of “end effectors” – each f which has a built-in vision system designed to eventually automate each limb’s approaching and grasping – rather than feet. These allow the legs to grapple onto handrails and sockets located both inside the space station and, eventually, on the ISS’s exterior. Naturally, these legs don’t come cheap -costing $6 million to develop and an additional $8 million to construct and test for spaceflight.

Robonaut was developed by NASA’s Johnson Space Center in collaboration with General Motors and off-shore oil field robotics firm Oceaneering. All that corporate involvement isn’t accidental; Robonaut isn’t designed to simply do chores around the space station. NASA is also using R2 to showcase a range of patented technologies that private companies can license from Johnson Space Center.

The humanoid, task-performing robot is also a NASA technology showcase. In a webcast, the space agency advertised its potential uses in logistics warehouses, medical and industrial robotics, and in toxic or hazardous environments. As NASA dryly puts it:

R2 shares senses similar to humans: the ability to touch and see. These senses allow it to perform in ways that are not typical for robots today. 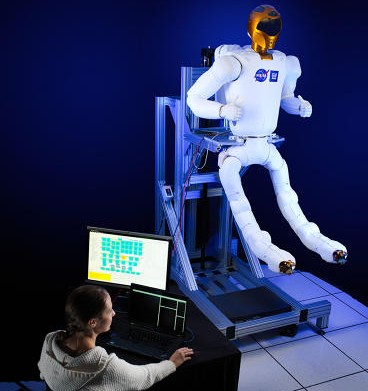 In addition to these legs, this latest supply drop – performed by a SpaceX Dragon capsule – included a laser communication system for astronauts and an outer space farming system designed to grow lettuce and other salad crops in orbit. We can expect that the Robotnaut 2 will be assisting in their use and upkeep in the coming months and years. So expect to hear more about this automated astronaut in the near future!

And in the meantime, be sure to check out this cool video of the R2 robotic legs in action:

One thought on “News From Space: Robotnaut Gets a Pair of Legs!”