My buddy and mentor in all things space and internet-related, Fraser Cain, has produced yet another informative video that I wish to share today. The subject in question is, “Could Jupiter Become a Star”? Naturally, this question has a wider context which needs to be understood if it is to make any sense. You see, for decades scientists have wondered whether or not a gas giant could be converted into a smaller version of own sun.

This is mainly due to the fact that gas giants and brown dwarves are very similar; in some cases, it’s even considered acceptable to say that a gas giant represents a failed star. This is not entirely accurate, since a gas giant does not have the necessary mass to trigger a deuterium reaction (aka. fusion) in order to create one. But, as Fraser points out, there are those who have wondered if an explosion – like that created by the Galileo space probe crashing into Jupiter – could cause a sun-birthing explosion.

This question has become relevant once again thanks to Cassini’s ongoing mission around Saturn. Thanks to the prevalence of noble (and flammable) gases that make up this planet as well, some worry that crashing a nuclear powered satellite into it will trigger a massive thermonuclear reaction. But, as Cain points out in a blow-by-blow manner, the answer to this question is a “series of nos”. Put simply, the raw materials and mass simply aren’t there.

Still, it’s a cool idea, and it was the focal point of Arthur C. Clarke’s 2001: A Space Odyssey and all subsequent novels in the series. In this seminal collection of classic sci-fi, we are told that an ancient race (the First Born) tampered with our evolution eons ago, thus giving rise to the hominid we see every time we look in the mirror. By 2001, when the story opens up, we see a space-faring humanity uncovering evidence of this face, in the form of a strange Monolith buried on the Moon.

After learning that this strange object is sending signals towards Jupiter, several missions are mounted which determined that these same extra-terrestrials are one again at work, this time in the outer Solar System. Believing there is life trapped underneath the heavy ice sheets of Europa, the First Born use their superior technology and know-how to convert Jupiter into a sun, which in turn melts Europa’s ice, giving rise to an atmosphere and letting the life out to flourish.

So while it’s sci-fi gold, its not exactly science. But then again, that’s the beauty of science fiction – you can always postulate that the means will exist somewhere down the road. But until such time as we can manipulate matter, download our consciousness into rectangular monoliths with perfect dimensions, and travel through the cosmos in said same objects, we’re going to have to get used to NOT looking up at night and seeing this: 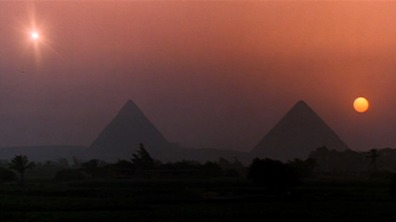 In the meantime, enjoy the video. Like all Universe Today videos, articles and podcasts, it’s really quite informative. And be sure to subscribe if you like having all your questions about space, science and the answers to the big questions addressed: