The other day, I finally got around to dedicating a post to Paolo Soleri and the concept of Arcology, something which has fascinated me for some time. But of course, I couldn’t do justice to it all in just one post, so rather than mention every example for arcologies that I could find, I chose a select few and planned to talk about the others later. You wouldn’t believe the amount of information that I’ve found since!

Initially, I thought only a few architecture firms and city planners were considering 3-D cities; but as it turns out, there are a dozen plans under consideration and more coming every day! From New Orleans to Haiti, from Shanghai to Dubai, the world abounds with plans for possible future cities that will take advantage of 3-D planning, sustainable resource management and green technology. This last aspect is key, seeing as how the vast majority of these plans are all inspired by one thing: Climate Change!

Take this concept for example: the Lillypad City. A revolutionary idea designed for dealing with the worst ravages of climate change in the coming decades, the LC is basically a floating city that is immune to things like coastal flooding and rising sea levels. According to many worst-case scenarios, these are expected to rise in excess of a meter by 2030. Coastal areas will be flooded and entire islands will disappear beneath the waves, leaving millions homeless and displaced. The Lillypad City is a possible solution: a self-contained environment built along coastal shelves and harbors, capable of supporting 50,000 people in an environment that’s ecologically friendly.

A similar concept is NOAH – or New Orleans Arcology Habitation, designed by Kevin Schopfer . An aptly named structure, NOAH is a proposed solution of what to do about coastal flooding and the ongoing problem of rebuilding New Orleans. At over 90oo square kilometers and designed to hold 40,000 residents, the pyramid shaped arcology will also boast shopping centers, 3 hotels, 1,500 timeshare units, parking for 8,000 cars, cultural spaces, public works, schools, an administrative office, and a health care facility.

All of this built upon a floating base with an open-wall structure, which will make it resistant to all forms of weather and immune to rising tides. In addition, the city will boast the latest in green technology, thus eliminate the carbon footprint of its residents. These will include internal electric transport links, secured wind turbines, solar panels and river based water turbines for electricity generation, fresh water reclamation and storage systems, grey water treatment, sky garden heating/cooling vents.

If NOAH catches on, there are even plans to build one on the banks of the Mississippi, where flooding is expected to occur, displacing people up and down the interior US.

And speaking of rebuilding, Haiti continues to suffer from the damage suffered from the 2010 Earthquake. Luckily, there are no shortages of creative ideas of what to deal with this and the likelihood of future earthquakes and flooding. Harvest City is one such idea, a city built on a series of islands capable of supporting 30,000 residents.

Based on the principles of arcology, this city is designed to be sustainable, ensuring adequate food production for all its residents while also providing employment and industry. If feasible, such a city could be indispensable to Haiti’s recovery and ensuring the survival of its people in the long run. 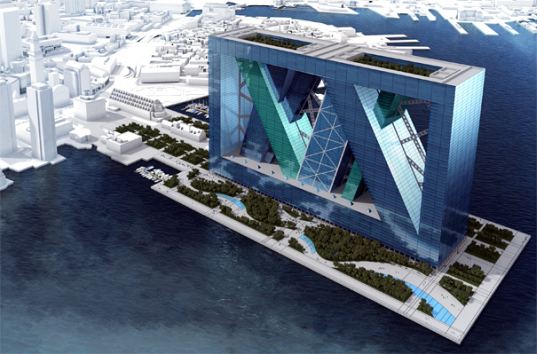 And then there’s the BoA, which is short for Boston Arcology. Much like many of it’s predecessors, the purpose here is to address the problem of urban sprawl in a way that does not impact the existing city, either by expanding into surrounding green space or renovating it’s aging, historic core. Built into Boston Harbor, this uniquely shaped structure will house 15,000 people and will also hold hotels, offices, retail spaces, museums, condominiums, and even a new city hall. 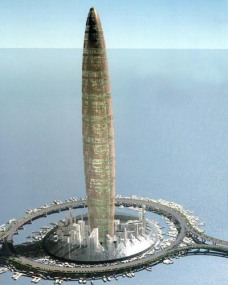 And speaking of 3-Dimensional, check out this baby: the proposed Bionic Tower! A vertical city measuring some 1,228 meters high and being able to house approximately 100,000 people, the Bionic Tower is yet another proposed solution of what to do about the twin problems of overpopulation and pollution.

And at the heart of it all lies the concept of merging bioscience with existing high-tech, meaning that the building will house extensive green-spaces, nature preserves, and its own water reclamation and bio-fuel systems.

Originally proposed at a lecture entitled “Conquest of Vertical Space in the 21st Century – International Conference on Multipurpose High-Rise Towers and Tall Buildings” in London, October, 1997, the project has since begun formal development, and garnered the interest of city planners and developers in both Shanghai and Hong Kong.

Japan is following suit. As already mentioned, the Shimizu Mega-City Pyramid is being slated for development in Tokyo Bay. However, within Tokyo’s urban center, there are also plans for the creation of a vertical city, known as Sky City 1000. Measuring 1000m high, hence the name, the supertall skyscraper would house 35,000 residents and 100,000 workers. The design consists of 14 concave dish-shaped “Space Plateaus” that are stacked one upon the other and held together by a series of vertical struts. Each plateau is designed to contain greenspaces, offices, commercial facilities, schools, theaters, residential spaces, and other modern amenities.

Back to Dubai, where arcology is just one of many inspirations for new construction projects, we have the “Dubai Ziggarut”. A proposed Carbon-Neutral habitat proposed by design firm Timelinks, this eco-pyramid is expected to house 1 million people once completed. Power is to be provided by steam, wind, solar panels and other natural resources, ensuring complete electronic self-sufficiency. The tightly knit city will also feature a super efficient public transportation system that runs both horizontally and vertically, and plans are being drawn up to utilize both public and private green spaces for agricultural opportunities.

And last, but certainly not least, there is the proposed design for the “Ultima Tower”. A massive edifice, measuring some 3200 meters in height, this supertall skyscraper was first proposed in 1991 by Eugene Hui as a way of tackling the planet’s sustainability problems.  At this height, it would be the tallest building ever created by human beings, should it ever be built. 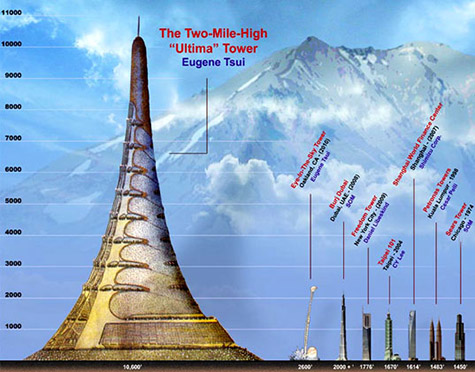 The interior of the structure would measure some 140,000,000 m2 and would be capable of supporting 1 million people. Relying on atmospheric pressure difference between the bottom and the top of the tower to create electricity and vast interior green space, the building would contain several “mini-ecosystems”.

Combined with water treatment and reclamation facilities, it would be capable of sustaining its inhabitants, perhaps without any outside help. Given the sheer cost of the structure (150 billion US dollars), it remains strictly theoretical. However, as time moves on and the problems of overpopulation and climate change continue, this tower may very well be making an appearance on the landscape!

That about does it for now. As I said before, its a rich and fertile concept! And given the pace of technological change and climate change, its becoming more likely with every passing day. Will it make a difference? Will it help us whether the storm, or help reverse the process? Hard to say. All we know is, living in sustainable communities that are self-sufficient and protected from external threats is far better than the alternative.

3 thoughts on “Arcology and Climate Change”