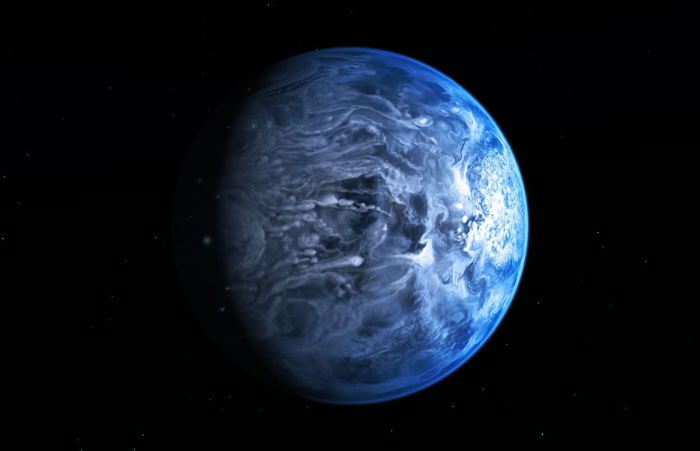 Ever since our astronomers have gained the ability to see into deep space and discern what lies in distant solar systems, a total of 910 extra-solar planets have been discovered. Of those, only a handful have been confirmed as potentially habitable by Earth scientists. Despite these discovered, it was not until recently that a “blue planet” outside of the Solar System, thanks to NASAs Hubble telescope.

But here’s the kicker: as it turns out, the planet is not blue due to the presence of liquid water. The blue color likely comes from clouds in the atmosphere made of molten glass. The planet is known as HD 189733 b, located roughly 63 light years away from Earth in the constellation of Vulpecula (aka. the Fox). Initially discovered in 2005 by French astronomers who observed it passing in front of its star, HD 189733 b is one of the best-studied exoplanets.

Prior to this new finding, it was already known that the planet was a hot Jupiter — a massive gas giant that orbits very close to its parent star — and that, using polarimetry, it was most likely blue. Since that time, the blue color has been confirmed by a spectrograph aboard Hubble which scanned the planet during an eclipse. As it passed behind its parent star and out of our vision, Hubble recorded less blue light coming from the star, while the other colors remained the same.

This strongly indicates that the light reflected by HD 189733 b’s atmosphere is blue and thus, if we were close enough to directly observe the planet, it would appear blue. This is an apparent first for astrophysicists and astronomers, who wouldn’t normally be able to observe such a fluctuation from 63 light years away. But the size of the planet, plus the amount of light reflecting off it from its very-close-by star, mean that Hubble can do its thing.

As for the cause of the color itself, the current theory is that the planets atmosphere is full of clouds that contain tiny silicate particles, which absorb some light frequencies but reflect and scatter blue light. In the words of NASA, because the surface of the planet is around  815 Celsius (1,500 Fahrenheit), these particles are likely in a molten, liquid state that periodically turn into rain. Yes, you read that right, the planet experiences periods of molten glass rain!

In addition to that, it is also known that its orbital period (length of a year) is only 2.2 days. The planet is also tidally locked, meaning that one side is always facing towards the sun while the other experiences perpetual night. So basically, outside of its blue color, HD 189733 b is about as uninhabitable as it gets.

Ah well, the search for a truly Earth-like exoplanet continues I guess! And in the meantime, enjoy this short video from Hubble ESA – a computer graphic representation of the universe’s other “blue planet”:

Just two days ago, the tenth anniversary of the shuttle Columbia disaster came to pass. On that day, the pilots who lost their lives, as well as those who died on the Challenger and Apollo 1 missions, were commemorated at a special wreath-laying ceremony at the Arlington National Cemetery in Virginia. It is a somber day, when people all over the world come together to commemorate those brave souls who died in the name of advancing exploration.

The disaster took place on Feb. 1st 2003, roughly sixteen days after the shuttle departed from Earth to conduct microgravity experiments. During re-entry, contact was lost with the shuttle as the orbiter suffered a catastrophic failure due to a breach that had opened in one of the shuttle’s wings. This had occurred during launch when a piece of foam fell from the external tank during launch.

The seven person crew of the STS-107 Columbia, which included Rick D. Husband, William C. McCool, David Brown, Laurel Blair Salton Clark, Michael P. Anderson, Ilan Ramon, and Kalpana Chawla, died just 15 minutes before they were meant to touch down at Kennedy Space Center. Addressing the nation, then-President Bush said, “mankind is led into the darkness beyond our world by the inspiration of discovery and the longing to understand. Our journey into space will go on.”

On Feb. 1st, President Obama and Charles Bolden, Administrator for NASA, also marked the occasion with somber words of remembrance. The former emphasized the ongoing important of space exploration and its inherent risks:

“The exploration of space represents one of the most challenging endeavors we undertake as a Nation. Whether it’s landing a 1-ton rover on Mars, building a space telescope 100 times more powerful than the Hubble, or preparing to send humans beyond the Moon, it’s imperative America continues to lead the world in reaching for the stars while giving us a better understanding of our home planet.”

Bolden expressed similar sentiments, calling to mind other tragedies and drawing attention to the lessons learned from the disaster:

“After the tragedy of Columbia, we not only returned to flight, we established policies and procedures to make our human spaceflight program safer than ever. Exploration will never be without risk, but we continue to work to ensure that when humans travel to space, nothing has been left undone to make them as safe as possible.”

Naturally, I hope he’s right about that. As we embark on an era of renewed exploration – to the Moon, to Mars, and even beyond – there will plenty of risk incurred and only a few people bold and intrepid enough to risk their lives to see it done. Much like veterans who died in the name of peace, we should never forget those explorers who died in the name of advancing humanity’s knowledge, awareness, and understanding of the universe.

Rest In Peace you brave souls! 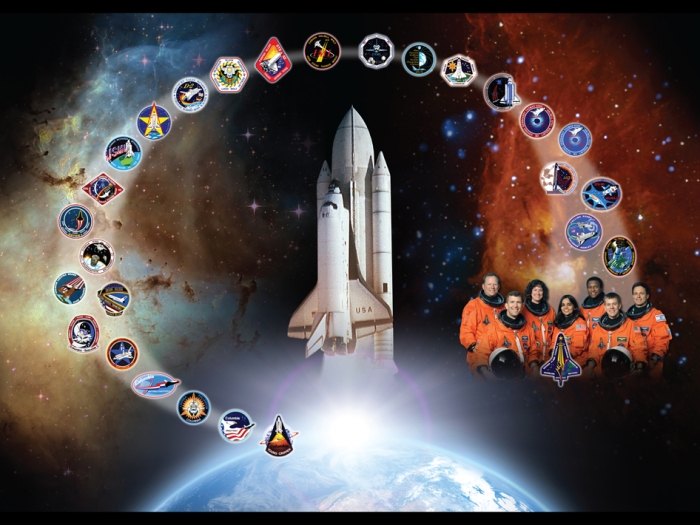