Imagine if you will a long tether made of super-tensile materials, running 100,000 km from the Earth and reaching into geostationary orbit. Now imagine that this tether is a means of shipping people and supplies into orbit, forever removing the need for rockets and shuttles going into space. For decades, scientists and futurists have been dreaming about the day when a “Space Elevator” would be possible; and according to a recent study, it could become a reality by 2035.

The report was launched by the International Academy of Astronautics (IAA), a 350-page report that lays out a detailed case for a space elevator. At the center of it that will reach beyond geostationary orbit and held taught by an anchor weighing roughly two million kilograms (2204 tons). Sending payloads up this backbone could fundamentally change the human relationship with space, with the equivalent of a space launch happening almost daily.

The central argument of the paper — that we should build a space elevator as soon as possible — is supported by a detailed accounting of the challenges associated with doing so. The possible pay-off is as simple: a space elevator could bring the cost-per-kilogram of launch to geostationary orbit from $20,000 to as little as $500. Not only would be it useful for deploying satellites, it would also be far enough up Earth’s gravity well to be able to use it for long-range missions.

This could include the long-awaited mission to Mars, where a shuttle would push off from the top and then making multiple loops around the Earth before setting off for the Red Planet. This would cut huge fractions off the fuel budget, and would also make setting up a base on the Moon (or Mars) a relatively trivial affair. Currently, governments and corporations spend billions putting satellites into space, but a space elevator could pay for itself and ensure cheaper access down the line. 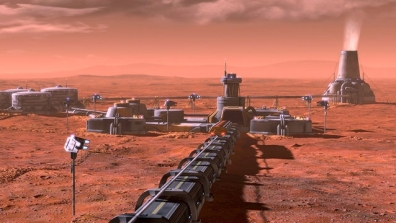 The report lays out a number of technological impediments to a space elevator, but by far the most important is the tether itself. Current materials science has yet to provide a material with the strength, flexibility, and density needed for its construction. Tethers from the EU and Japan are beginning to push the 100-kilometer mark, are still a long way off orbital altitude, and the materials for existing tethers will not allow much additional length.

Projecting current research in carbon nanotubes and similar technologies, the IAA estimates that a pilot project could plausibly deliver packages to an altitude of 1000 kilometers (621 miles) as soon as 2025. With continued research and the help of a successful LEO (low Earth orbit, i.e. between 100 and 1200 miles) elevator, they predict a 100,000-kilometer (62,137-mile) successor will stretch well past geosynchronous orbit just a decade after that.

The proposed design is really quite simple, with a sea platform (or super-ship) anchoring the tether to the Earth while a counterweight sits at the other end, keeping the system taught through centripetal force. For that anchor, the report argues that a nascent space elevator should be stabilized first with a big ball of garbage – one composed of retired satellites, space debris, and the cast-off machinery used to build the elevator’s own earliest stages.

To keep weight down for the climbers (the elevator cars), this report imagines them as metal skeletons strung with meshes of carbon nanotubes. Each car would use a two-stage power structure to ascend, likely beginning with power from ground- or satellite-based lasers, and then the climber’s own solar array. The IAA hopes for a seven-day climb from the base to GEO — slow, but still superior and far cheaper than the rockets that are used today.

One thing that is an absolute must, according to the report, is international cooperation. This is crucial not only for the sake of financing the elevator’s construction, but maintaining its neutrality. In terms of placement, IAA staunchly maintains that a space elevator would be too precious a resource to be built within the territory of any particular nation-state. Though every government would certainly love a space elevator of their very own, cost considerations will likely make that impossible in the near-term.

By virtue of its physical size, a space elevator will stretch through multiple conflicting legal zones, from the high seas to the “territorial sky” to the “international sky” to outer space itself, presenting numerous legal and political challenges. Attacks by terrorists or enemies in war are also a major concern, requiring that it be defended and monitored at all levels. And despite being a stateless project, it would require a state’s assets to maintain, likely by the UN or some new autonomous body.

In 2003, Arthur C. Clarke famously said that we will build a space elevator 10 years after they stop laughing. Though his timeline may have been off, as if often the case – for example, we didn’t have deep space missions or AIs by 2001 – sentiments were bang on. The concept of a space elevator is taken seriously at NASA these days, as it eyes the concept as a potential solution for both shrinking budgets and growing public expectations.

Space is quickly becoming a bottleneck in the timeline of human technological advancement. From mega-telescopes and surveillance nets to space mining operations and global high-speed internet coverage, most of our biggest upcoming projects will require better access to space than our current methods can provide for. And in addition to providing for that support, this plans highlights exactly how much further progress in space depends on global cooperation.