Last weekend, while the wife, our friend and I were all watching the new Star Trek movie, a number of trailers came on that made us antsy for other “coming attractions”! One of them was one I instantly recognized and began saying the title of long before they flashed it across the screen. Months back, when this movie was first announced, I posted the trailer here because it looked to have all the things I love in sci-fi story. And they have since come out with a longer, more detailed trailer which I share now…

Elysium tells the story of a dystopian future, set in 2154, where the wealthy and privileged live in an orbital colony that is peaceful, serene, idyllic, and sees to all their needs (and looks a lot like the station from Space Odyssey). Meanwhile, the remaining 99% of humanity live planetside, where pollution, environmental collapse and economic ruin have made Earth into a veritable hellhole.

Enter into this Max De Costa (played by a cueballed Matt Damon), a man who is near death who comes to learn of a secret that could topple the whole system and achieve a degree of social justice. In order to do this, he has to break into Elysium, a facility that is heavily guarded and run by Secretary Rhodes (Jodie Foster), and undergoes a radical surgery to get an exoskeleton and some powerful weaponry permanently attached.

Directed by Neil Blomkamp – the South-African director who brought us District 9 and provided visual effects for such shows as Star Gate: SG-1, Smallville and Dark Angel – this movie clearly boasts the same kind of gritty, realistic texture he has come to be known for. And after the 2008 Financial Crisis and the subsequent Occupy Movement, it’s message is pretty timely and likely to be well-received. 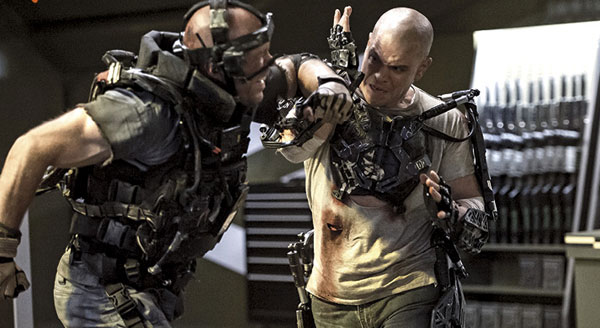 As for me? You can keep your social commentary and comparisons to other movie franchises, I wanna see me some exoskeleton battles! Enjoy the trailer: 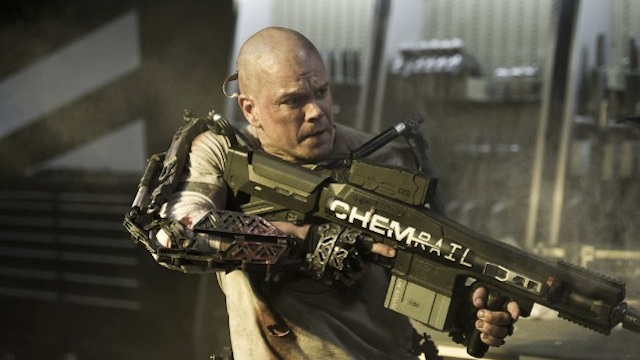 Hello people and welcome back to another installment of MTM! Today, its a full-length trailer for the upcoming movie Elysium, a dystopian tale that takes place in the year 2159, where the class divide between rich and poor extends into orbit. The very wealthy live on a man-made space station (named Elysium) while the rest of the population resides on a ruined Earth.

Into this, a cybernetically-enhanced man from Earth takes on a mission that could bring equality to the polarized worlds. Written and directed by Neil Blomkamp, who wrote District 9, and starring Matt Damon, Jodie Foster and Sharlto Copley (who played the protagonist of District 9), the sci-fi makes use of a lot of classic dystopian themes and showcases some very impressive looking sets.

I for one shall bookmark this movie as a must-see/must rent/catch on Netflix/worst-case-scenario must download. Stuff happens, what can I say?

Big news from a Galaxy far, far away… Sorry, couldn’t resist! There has been some new industry buzz regarding the upcoming relaunch of the Star Wars franchise of late. Ever since the media giant bought out Lucasfilm from Mr. Lucas himself, there has been plenty of speculation about what the focus of the new trilogy will be. According to Marketsaw, an entertainment and movie blog, the primary focus will be none other than Luke Skywalker himself.

Apparently, the source of this news is an industry insider who reported earlier this year that there would be an episode 7, 8, and 9, so fandom is treating this rumor as canon! Though Luke would be the main focus, they claim the rest of the original cast will also play a prominent role. As such, we can expect that Disney will be veering away from prequels and will be either taking the Thrawn Trilogy approach, or just picking up the story where it left off after Return of the Jedi.

What’s more, the age of the original actors was acknowledged as a bit of a hurdle, but the studio still seems committed to working with them. So perhaps a sequel that takes place many years later would be more the goal here. Or, as the source put it: “The main problem was the age of the cast, and the tone of the story. Now I do believe that Walt Disney intend on playing to the cultural significance of that original trilogy. You will see a tone more in line with the original trilogy, and specifically featuring that cast, if everything shakes out as intended. Which it will, I promise you.”

Also of interest was the role that Lucas himself would be taking in the new trilogy. According to the source, the Disney made this decision after they “realized that George Lucas and STAR WARS are one and the same, so George will certainly have a voice on any angle taken, in fact I believe it’s one of many stipulations. However he will no longer have creative control, and as I said before George was already looking at other creative talents to bring his canon to life…”

Interesting. The source went on to say that the new movies were being “rewritten from previously secret drafts from way back during the making of the original trilogy.”

Well… this sounds like good news! In short, the new movies will feature the original cast and will be trying to strike a tone similar to the original trilogy. What’s more, while Lucas would have input and they would be working from his original notes, he would be relying on others to help bring his vision to life. If I recall correctly, it was this combination which made the original trilogy so enduringly awesome, and Lucas’ straying from it which made the prequels suck!

And that’s not all. The source also gave some information as to who would be starring in the new movie and who would be attached to direct. Apparently, many of the original actors have already been approached, and Mark Hamil is said to be “a certainty”. In terms of directors, the studio is apparently considering Steven Speilberg, Neil Blomkamp (District 9, Elysium), Alfonso Cuarón (Children of Men, Gravity), Matthew Vaughn (Kick Ass, First Class), Darren Arnofsky (The Fountain, Noah) and Joss Whedon (Buffy, Firefly, Serenity, Avengers). Personally, I don’t know who would be best suited, as every name in this dossier seems like a winner!

All I can say is, this is exciting news indeed. A new dawning for the Star Wars franchise, with plans to make not just one, but a series of trilogies that turn the story into a multi-generational saga – which is apparently what Lucas originally hoped for. And since the studio is planning on mounting a very aggressive marketing strategy – a la Harry Potter- we can expect to be hearing plenty more before the first movie is set to air in 2015.

And may the Force be with us! Again, sorry!

Yet another cool aspect of the recent Comic Con was the trailers for new movies previews that fans were treated to. One such movie was Neil Blomkamp’s (director of District 9) new film, entitled Elysium. According to IO9 magazine, the movie stars Matt Damon in the lead role and is scheduled for release in 2013.

Based on the video reel Blomkamp offered, the movie is still very much in development. Rough place holders had to stand in for many of the visual effects, which are as of yet incomplete. However, the fans were given a precis of the storyline, which is decidedly dystopian and cyberpunk in nature.

Set in 2159, the plot revolves around the eponymously named space station of Elysium, an apparently utopian retreat where the ultra-rich and beautiful live and have access to the most advanced medical technology. The rest of humanity lives planet-side, where overcrowding, disease and radiation have resulted from overpopulation and pollution. Enter into this Max (Matt Damon), a criminal who’s suffering from radiation sickness and must make it to Elysium’s medical facilities at all costs.

In time, Max’s mission becomes complicated as he comes into information which could shut down Elysium and usher in an age of equality for the human race, or at least a less polarized division of wealth. Additional concept art was also released, like an interior shot of the station featured below. Given the layout, Elysium appears to be based on an Island Three design, a circular space station and rotates to provide gravity. Echoes of 2001: A Space Odyssey there. Good for Blomkamp, referencing a classic!

Additional cast members will include Jodie Foster, District 9‘s Sharlto Copley, and Alice Braga (of City of God, Predators, Repo Men and I Am Legend fame). Think I might catch this one!