If 2013 will go down in history as the year the Higgs Boson was discovered, then 2014 may very well be known as the year dark matter was first detected. Much like the Higgs Boson, our understanding of the universe rests upon the definitive existence of this mysterious entity, which alongside “dark energy” is believed to make up the vast majority of the cosmos.

Before 2014 rolled around, the Large Underground Xenon experiment (LUX) – located near the town of Lead in South Dakota – was seen as the best candidate for finding it. However, since that time, attention has also been directed towards the DarkSide-50 Experiment located deep underground in the Gran Sasso mountain, the highest peak in the Appennines chain in central Italy. 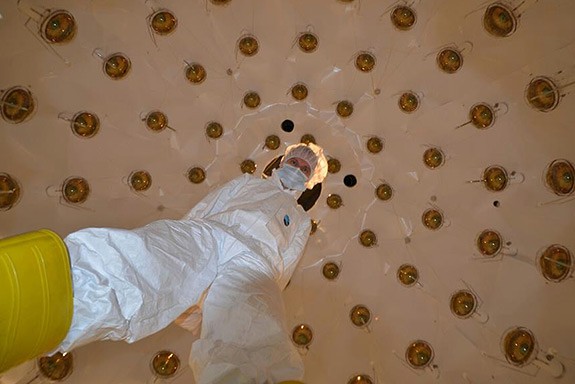 This project is an international collaboration between Italian, French, Polish, Ukrainian, Russian, and Chinese institutions, as well as 17 American universities, which aims to pin down dark matter particles. The project team spent last summer assembling their detector, a grocery bag-sized device that contains liquid argon, cooled to a temperature of -186° C (-302.8° F), where it is in a liquid state.

According to the researchers, the active, Teflon-coated part of the detector holds 50 kg (110 lb) of argon, which provides the 50 in the experiment’s name. Rows of photodetectors line the top and bottom of the device, while copper coils collect the stripped electrons to help determine the location of collisions between dark matter and visible matter. 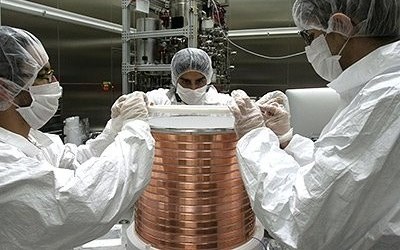 The research team, as well as many other scientists, believe that a particle known as a WIMP (weakly interacting massive particle) is the prime candidate for dark matter. WIMP particles have little interaction with their surroundings, so the researchers are hoping to catch one of these particles in the act of drifting aloof. They also believe that these particles can be detected when one of them collides with the nucleus of an atom, such as argon.

By cramming the chamber of their detector with argon atoms, the team increases their chance of seeing a collision. The recoil from these collisions can be seen in a short-lived trail of light, which can then be detected using the chamber’s photodetectors. To ensure that background events are not interfering, the facility is located deep underground to minimize background radiation. 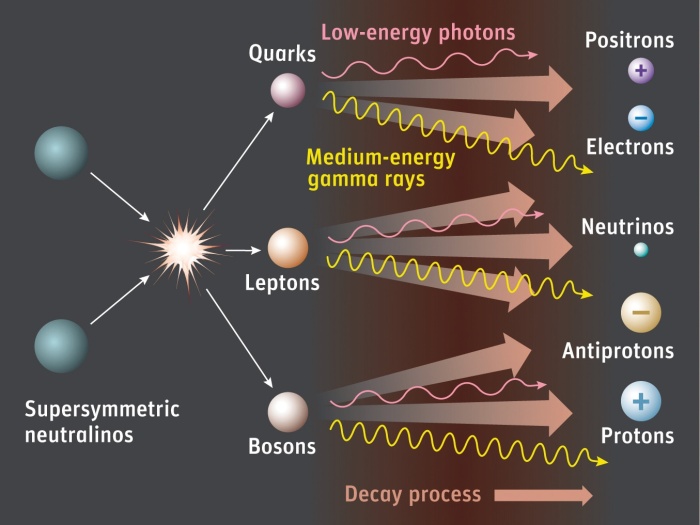 To aid in filtering out background events even further, the detector sits within a steel sphere that is suspended on stilts and filled with 26,500 liters (7000 gallons) of a fluid called scintillator. This sphere in turn sits inside a three-story-high cylindrical tank filled with 946,350 liters (250,000) of ultrapure water. These different chambers help the researchers differentiate WIMP particles from neutrons and cosmic-ray muons.

Since autumn of 2013, the DarkSide-50 project has been active and busy collecting data. And it is one of about three dozen detectors in the world that is currently on the hunt for dark matter, which leads many physicists to believe that elusive dark matter particles will be discovered in the next decade. When that happens, scientists will finally be able to account for 31.7% of the universe’s mass, as opposed to the paltry 4.9% that is visible to us now. 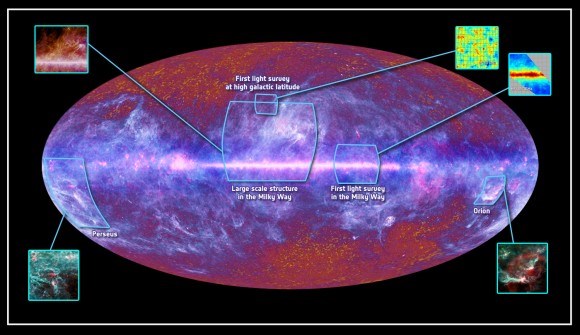 Now if we could only account for all the “dark energy” out there – which is believed to make up the other 68.3% of the universe’s mass – then we’d really be in business! And while we’re waiting, feel free to check out this documentary video about the DarkSide-50 Experiment and the hunt for dark matter, courtesy of Princeton University: 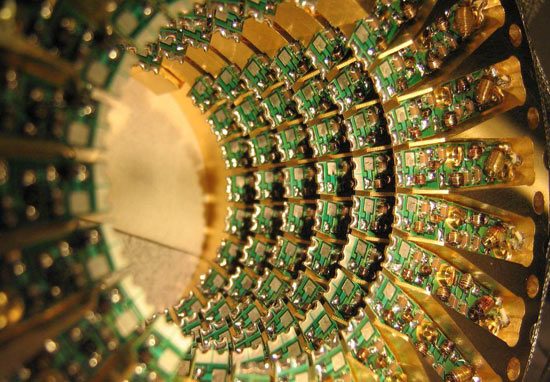 Recently, a team of researchers at the University of Rochester conducted an experiment where they managed to suspend a nano-sized diamond in free space with a laser. The purpose of the experiment was to measure the amount of light emitted from the diamond, but had the added bonus of demonstrating applications that could be useful in the field of quantum computing. 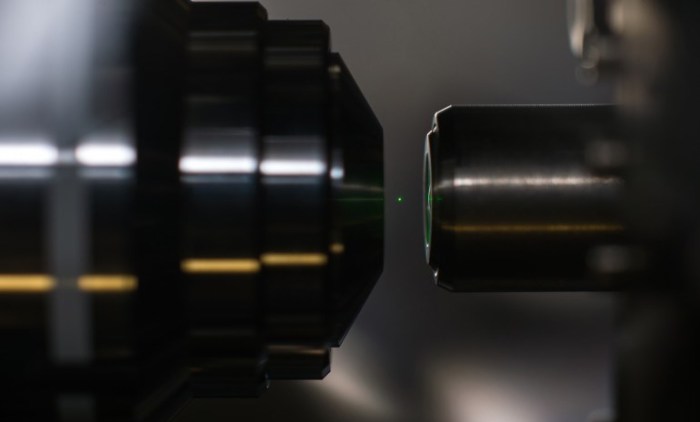 Since this process occurs faster than the speed of light (as no movement takes place) and qubits (quantum bits) have the ability to be in more than one state simultaneously, computations done using this model would be exponentially faster. But despite many advancements made in recent years, the field remains largely theoretical and elusive.

To conduct their experiment, the researchers focused a laser into a 25 cm (10 inch) chamber and then sprayed an aerosol containing dissolved nanodiamonds inside. These nanodiamonds were attracted to the laser in a technique known as “laser trapping”, until a single particle was isolated and made to levitate. Once the tiny gem was levitating in free space, the researchers used another laser to make defects within the diamond emit light at given frequencies. 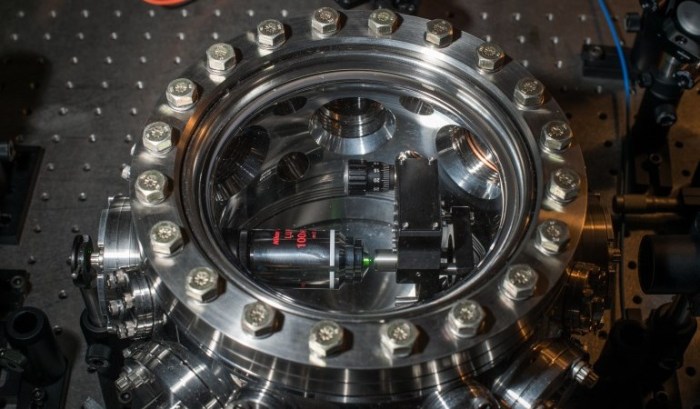 This process is known as photoluminescence – a form light emission that is caused by defects in the tiny diamond that allows for the absorptions of photons. When the system is excited, it changes the spin; and when the it relaxes after the change, other photons are emitted. This occurs because nitrogen atoms replace some of the carbon atoms in the diamond. Once the nitrogen is nested in the diamond’s atomic structure, it is possible to excite electrons with a laser.

According to the researchers, this photoluminescence process has the potential to excite the system and cause what is known as Bohr spin quantum jumps, which are changes in spin configuration of the internal defect. This occurs because nitrogen atoms replace some of the carbon atoms in the diamond. Once the nitrogen is nested in the diamond’s atomic structure, it is possible to excite electrons with a laser. 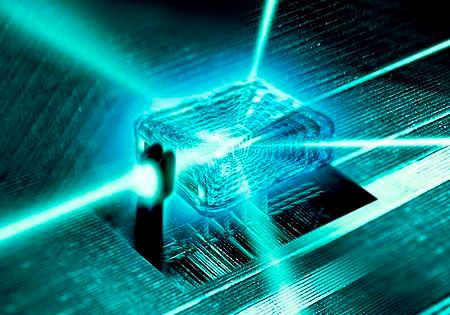 In addition, the potential also exists to turn the nanodiamond into an optomechanical resonator. According to Nick Vamivakas, an assistant professor of optics at the University of Rochester, these are structures in which the vibrations of the system can be controlled by light. Optomechanical resonators have the potential to be used as incredibly precise sensors, which could lead to uses in microchips.

In addition, these resonator systems have the potential to create Schrödinger Cat states, which are typically not found in microscopic objects. As anyone who’ familiar with Futurama or Big Bang Theory may recall, this refers to the thought experiment where a cat is inside a box with poison, and until someone opens the box and determines its whereabouts, the cat could be considered simultaneously both alive and dead. 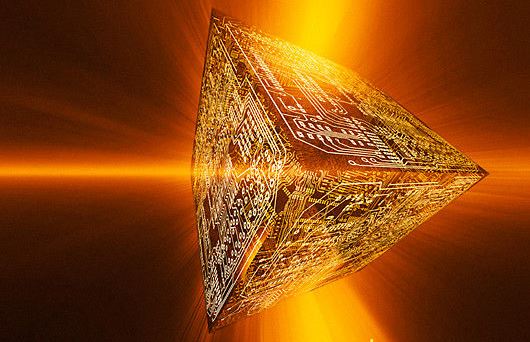 Being able to stimulate matter so that it can exist in more than one state at any given time is not only revolutionary, it is a clear step towards the creation of machines that exploit this principle to perform computations. According to Nick Vamivakas, an assistant professor of optics at the University of Rochester, explained:

Cat or cat-like states contradict our everyday experiences since we do not see common things in quantum states. The question is: where is this boundary between microscopic and macroscopic? By generating quantum states of larger and larger objects, we can hone in on a boundary … if there is one.

Naturally, the Rochester team is still a long way from achieving their big breakthrough, and Vamivakas himself admits that he does not know how far away a quantum computing truly is. In terms of this latest experiment, the team still needs to cool the crystal better, which they are hoping can be achieved with a few technical improvements. And then they hope to find a better way of running the experiment than spraying nanodiamond dust into a tube.

In the meantime, check out this video of the experiment. It promises to be “illuminating” (sorry!):