For those looking forward to the upcoming Riddick movie, there’s a little prequel you should probably watch first. It’s what’s known as a Motion Comic, which is basically video short made up of animated cells. Picking things up where Chronicles of Riddick left off, it tells of what happened that sent Riddick from the seat of Lord Marshall to a remote corner of the universe, once again reprising his role as a wanted man.

Let me be clear, this is not a fan made video. This is a studio-approved short and stars Vin Diesel and Karl Urban, providing the vocals for Riddick and Lord Vaako. And I can honestly say, its not bad. Like many people, I was wondering how the movie makers would tackle the issue of Riddick’s ascension to the Necromonger throne and how he went from that to basically reliving the plot from Pitch Black.

I mean, it’s not every day you become leader of an apocalyptic army. And you don’t just go from that to being a fugitive again, right? So with this short filling the narrative gap, fans will pretty much be set for the upcoming movie. Though I’m not sure I’m going to be seeing the movie when it comes out, I do feel prepared for it now!

It’s been a boon week for movie news and previews, and I’ve found myself quite behind on a few things. Good thing it’s not my job to stay current, otherwise I would have been fired a long time ago! But as a genre fan, I feel the need to keep up with sci-fi news and pass it on whenever possible. And lately, the big news items have had to do with upcoming adaptations, sequels, relaunches, or all of the above.

So to save some time I thought I’d do a two-fer trailer post today and feature the newest trailers for Catching Fire and Riddick. Though I’m sure the former needs no explanation, for those who haven’t read or seen The Hunger Games, this would be the much-anticipated sequel. Still trying to finish this book myself, mainly because I promised I’d review the whole trilogy. Still, the plot for this one is really quite clear.

After winning the 74th annual Hunger Games, Katniss Everdeen and Peeta are called upon to do the Victory Tour, an event which occurs between games and showcases the winners. During the tour, Katniss is made aware of how their victory has inspired dissent, which puts her in a compromising position. Between fulfilling her role as a symbol of resistance and keeping up appearances, there’s plenty of high drama to be had!

As for the latter, this would the latest installment in that particular Vin Diesel antihero engine known as the Riddick franchise. It began with Pitch Black, a movie who’s script was originally proposed for Alien 3 but rejected in favor of the whole prison planet plot. It went on to become a cult classic, spawning the much higher-budget Chronicles of Riddick.

In this third installment, its clear the movie makers have decided to recycle the plot from the first movie and have once again put Riddick on some remote planet where he is being pursued by Bounty Hunters and Necromongers. No sooner is he captured that hostile aliens show up and they all have to work together to survive. As he said in first movie, “It ain’t me you gotta worry about now.” At least Karl Urban is back, and Katee Sackhoff (Starbuck from BSG) is part of the cast!

Catching Fire is set to be released on  November 22, 2013, while Riddick will be premiering on September 6th. Enjoy!

Guess what? In this new age of reboots, relaunches and reimaginings, it seems that not a single cult classic is immune. Case in point, the eponymously named sequel Riddick, which is set for release in early September of 2013. Though there are minimal hints provided concerning the plot of this third installment, it seems clear at this point that Riddick is once again on the run from mercenaries and ends up on a planet teeming with hostile life.

Going back to their origins, I take it? Personally, I would prefer seeing what happened after Riddick took control of the entire Necromonger army. And if some tells me this is what followed, i.e. he chose to ditch all that and go back on the run, I’ll totally write this movie off! You can’t tell me he likes being hunted by mercs and living hand to mouth THAT much! I mean there’s recidivism and then there’s just plain dumb!

Talking about sexy Star Wars costumes got me thinking… Sure, all those ladies costumes were downright sexy, but they don’t ME a lot of good (not beyond staring at them for hours on end, anyway!) So I began to ask myself, what should I go as for Halloween this year? That past two years I’ve been doing this Wolverine costume, which was pretty boss the first year I unveiled it! I had a leather jacket, blue jeans and did some wood claws that I would hold between my fingers. The real challenge, however, was in sculpting my hair to look like Wolverine’s horned crown. Check it out: 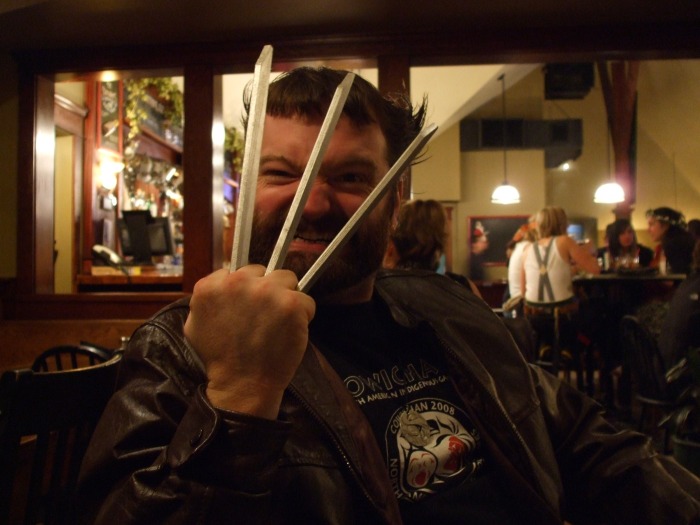 This is me snarling and bearing my claws at the bar. And below is me threatening our friend Jerry as my sister-in-laws dog Dogie tries to intervene (such a good dog!) 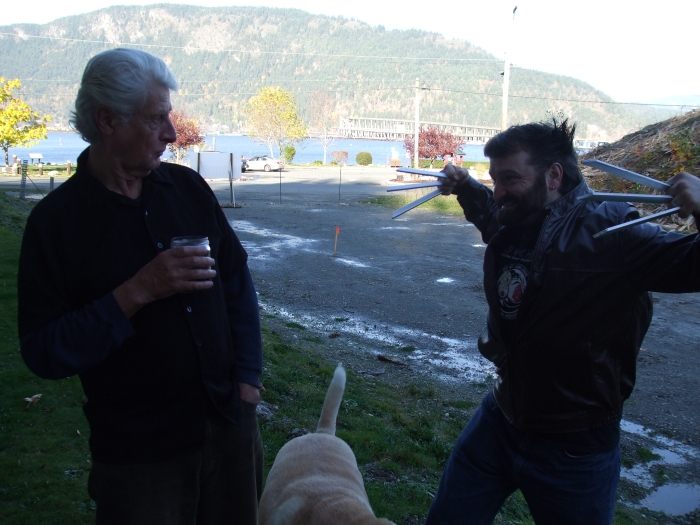 However, the costume has gotten a little tired after two years in a row. So I was wondering… what to do this year? There are a couple possibilities, some tried and some entirely new. For instance, given my total non-shortage of tank tops and outdoor gear, I was thinking I could go as Riddick this year. Not a difficult costume to pull off; already got a set of goggles, and would just need to shave my head.

And speaking of shaving my head, that calls to mind another possible costume! Ever since TDKR came out, I’ve been dying to do a rendition of Bane. The Joker was a little labor intensive and really didn’t seem doable back when TDK came out. But this year, I think I just might be able to find everything I need to pull of this latest, brawny villain! I already got a line on where I could get a mask just like his, and for cheap too! The rest of the costume is pretty simple and can be slapped together from a vest, a tank and some work pants easily enough. 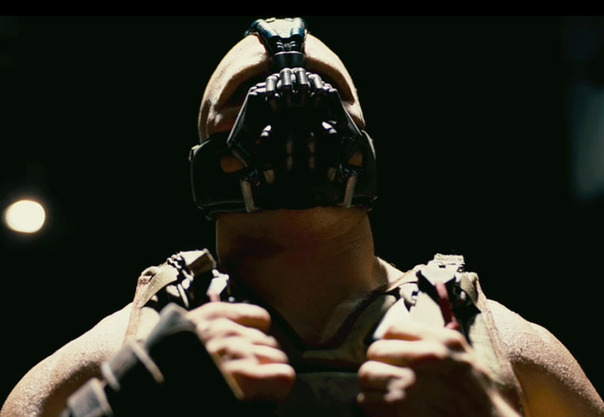 Of course, I know what people are thinking. “Matt, you couldn’t possibly pull of these guys, you don’t have the upper body musculature!” …You’ve got some attitude buster! Besides, it’s Halloween, and if girls can go out as totally sexualized versions of droids, nurses, vampires and werewolves, I can pull off Bane or Riddick. You just watch me!

Also, if anyone’s got any ideas for themselves, feel free to let me know what they are. I’m thinking I might like to do a post about some of the best themed costumes that people have ever pulled off. I’m mainly interested in outfits from fantasy and sci-fi, mainly because they are the most fun and hilarious! At least, that’s what Comic Con and the Big Bang Theory have taught me.