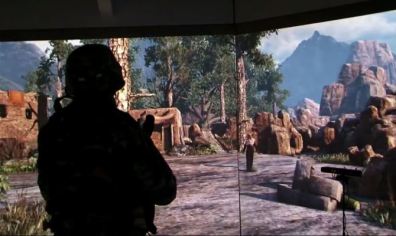 A current obsession of military planners is keeping up with the latest in battlefield challenges while also dealing with troop reductions and tightened budgets. Video games are one solution, providing soldiers with  training that does not involve real munitions or loss of equipment. Unfortunately, most of these games do not provide a real-world immersive feel, coming as close to the real thing as possible while still being safe.

Hence why the the Army Contracting Command enlisted the help of Northrop Grumman this past January to integrate their Virtual Immersive Portable Environment (VIPE) “Holodeck” into the US Army’s training program. Much like the CAVE2, a VR platform created by the Electronic Visualization Laboratory (EVL) at the University of Illinois, this latest holodeck is a step towards fully-realized VR environments.

Last year, the VIPE Holodeck took first place in the Federal Virtual Challenge – an annual competition led by the U.S. Army Research Laboratory’s Simulation and Training Technology Center – for the system’s Kinect integration navigation sensor, which gives users the ability to crawl, walk, run, stop, jump, and move side to side in the virtual environment. 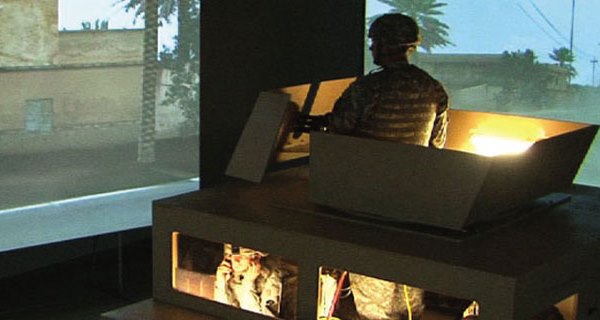 According to Northrop, the VIPE Holodeck moves ahead of other virtual simulators thanks to its advanced situational training, where service members can walk through an area in the replicated virtual environment and prepare for what they may encounter in real life. This works not only for infantry and target practice, but for vehicle drivers and police officers looking to simulate various situations they are likely to encounter.

To enhance that training, operators can drop threats into the environment, including IEDs and enemy shooters, as well as signals that should tip them off to potential threats and see how they respond before they actually find themselves in that situation. This sort of versatile, multi-situational complexity is precisely what the Army is looking for.

For us to be able to execute realistic training — good training — we have to be able to bring that operational environment [into the virtual world]. We want to get away from having multiple environments, virtual gaming and instruction, and go to one synthetic environment, get to a lower overhead and integrate the full operations process … according to the common operating picture.

But looking ahead, the applications for this type of technology are virtually (no pun!) limitless, never mind the fact that we are realizing something directly out of Star Trek. Northrop says it’s also exploring options for VIPE as a stepping stone to live-training within the medical field, as well as law enforcement and first responders for situations such as live-shooter or hostage scenarios.

Immersive virtual reality also figures quite prominently in NASA’s and other space agencies plans for future exploration. Given that manned missions are expensive, time-consuming, and potentially dangerous, mission planners are investigating Telexploration as a possible alternative. Here, orbiters and rovers would transmit visual information in real-time, while VR decks would be used to give the appearance of being on location.

As Ryan Frost, Northrop’s program manager for the VIPE Holodeck, put it:

The great thing about virtual reality and gaming technology [is that] it’s moving so rapidly that really it has endless possibilities that we can do. If you can think it, we can create it, eventually.

And be sure to check out this video from Northrop Grumman showing the VIPE Holodeck in action:

For some time, NASA has been forthright about its plans to tow an asteroid closer to Earth for the sake of study. As part of their long-term goals, this plan calls for the capture of a Near Earth Object (NEO) and positioning it at one of two Lagrange Points before conducting research on it. And late last month, they released plans on how they intend to go about doing this.

The first step, picking and choosing a potential target, would be handled by the telescope known as the Wide Field Infrared Survey Explorer (WISE). Launched in 2009, this telescope was charged with a two-year mission to image 99% of the visible sky in infrared wavelengths. Once this mission was successfully completed, NASA reassigned the craft a second four-month mission to track and discover near-Earth objects (NEOs). 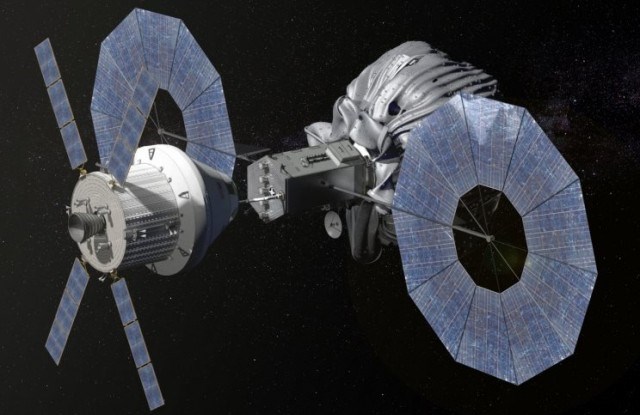 Once that’s done, the next phase of the mission will involve launching an unmanned probe to intercept the NEO and drag it back into a retrievable position, probably by wrapping a bag around it. While this might sound improbable, keep in mind NEOs are rather small, and a bag of high-tensile material would do the trick. A crew would then be dispatched on an Orion capsule mated to the upcoming heavy rocket known as the Space Launch System to retrieve samples of the asteroid and return them to Earth.

Despite troubles getting the US Congress to approve a budget necessary to mount a capture mission, NASA remains committed to the plan, mainly because of the benefits it would entail. Many of these small asteroids are thought to contain minerals from the very early stages of the solar system’s formation, which means they’d be a useful means of investigating theories on how planets and planetoids form. 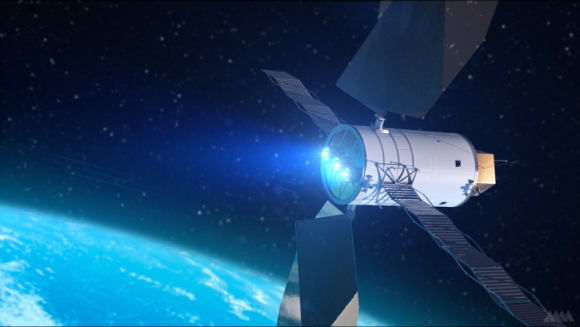 In addition, studying NEOs is also essential in creating safeguards against them striking Earth. The Russian meteorite explosion earlier this year put a new emphasis on the importance of tracking small asteroids, as the object that detonated in the skies above Chelyabinsk was too small to have been detected by other means. Much like many small asteroids, NEOs are too small to reflect visible light and must be tracked by infrared imaging.

Ultimately, bagging and dragging one of the smaller ones may be the only way to successfully study them and find ways to divert the larger ones. And a mission of this nature would stretch NASA’s unmanned capabilities for probes and satellites — a useful factor when discussing exploration of targets like Europa or Titan. It would also serve as a test of the Orion capsule and SLS, which are the intended means of getting astronauts to Mars by 2030. 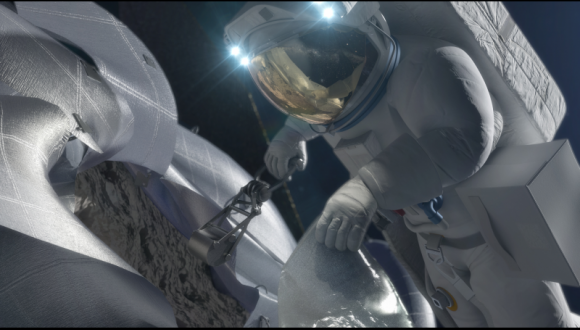 NASA’s news release included a series of photos and a video animation of how the capture operation would take place, which included crew operations, the Orion spacecraft’s trip to and rendezvous with the relocated asteroid, as well as astronauts maneuvering through a spacewalk to collect samples from the asteroid.

NASA will also be hosting a technical workshop at the Lunar and Planetary Institute in Houston from Sept. 20th to Oct. 2nd to discuss potential ideas, and is looking for public input. Virtual participation will also be available to the public, and details on how to participate will become available soon. Stay tuned for updates, or check in with Universe Today, who is following the story.

And be sure to check out NASA’s video on what the NEO capture would look like. And check out more of pictures at NASA’s Asteroid Initiative website.

Virtual Reality, which was once the stuff of a cyberpunk wet dream, has grown somewhat stagnant in recent years. Large, bulky headsets, heavy cables, and graphics which were low definition and two-dimensional just didn’t seem to capture the essence of the concept. However, thanks to the Oculus Rift, the technology known as Virtual Reality has been getting a new lease on life.

Though it is still in the development phase, the makers of the Oculus Rift has mounted some impressive demos. Though still somewhat limited – using it with a mouse is counter-intuitive, and using it with a keyboard prevents using your body to scan virtual environments –  the potential is certainly there and the only question at this point is how to expand on it and give users the ability to do more.

One group that is determined to explore its uses is NASA, who used it in combination  with an Omni treadmill to simulate walking on Mars. Already, the combination of these two technologies has allowed gamers to do some pretty impressive things, like pretend they are in an immersive environment, move, and interact with it (mainly shooting and blowing things up), which is what VR is meant to allow.

NASA’s Jet Propulsion Laboratory, however, went a step beyond this by combining the Omni and a stereoscopic 360-degree panorama of Mars to create a walking-on-Mars simulator. The NASA JPL team was able to give depth to the image so users could walk around an image of the Martian landscape. This is perhaps the closest normal folks will ever get to walking around on a “real” alien planet.

Along with the Martian terrain, JPL created a demo wherein the user could wander around the International Space Station. The JPL team also found that for all the sophisticated imagery beamed back to Earth, it is no substitute for being immersed in an environment. Using a rig similar to the Rift and Omni could help researchers better orient themselves with alien terrain, thus being able to better plan missions and experiments.

Looking to the long run, this kind of technology could be a means for creating “telexploration” (or Immersive Space Exploration) – a process where astronauts would be able to explore alien environments by connecting to rover’s or satellites camera feed and controlling their movements. In a way that is similar to teleconferencing, people would be able to conduct true research on an alien environment while feeling like they were actually in there.

Already, scientists at the Mars Science Laboratory have been doing just that with Curiosity and Opportunity, but the potential to bring this immersive experience to others is something many NASA and other space scientists want to see in the near future. What’s more, it is a cheap alternative to actually sending manned mission to other planets and star systems.

By simply beaming images back and allowing users to remotely control the robotic platform that is sending them, the best of both worlds can be had at a fraction of the cost. Whats more, it will allow people other than astronauts to witness and feel involved in the process of exploration, something that social media and live broadcasts from space is already allowing.

As usual, it seems that the age of open and democratic space travel is on its way, my friends. And as usual, there’s a video clip of the Oculus Rift and the Omni treadmill bringing a walk on Mars to life. Check it out: