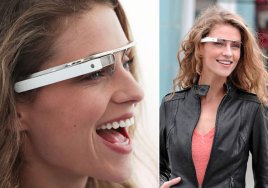 It’s like something out of a cyberpunk wet dream. Long the subject of speculative science fiction, it seems that we now have a working prototype for a set of goggles that can handle our wireless and networking needs. Merging the concepts of Augmented Reality with a Head-Mounted Display (HMD), Google has created what are now known as the “Google Glasses”.

Also known as “Project Glass”, this device is the first working model for what is often referred to as mobile computing. While still being tested, the project has been unveiled and Google Inc announced that they will now be conducting public trials to test their portability and ergonomics.

But of course, some of the terminology needs a little explanation. For example, augmented reality. By definition, this is the live direct, or indirect, view of the real world with computer generated imagery laid over top. One can be walking down the street or otherwise interacting with their world, but will also be able to view a desktop browser, a web page, or streaming video laid just overtop.

According to Google, the glasses will function much like an iPhone with the Siri application, in that wearers will be able to get onto the internet using voice commands. If this goes through, Apple Inc. will have its work cut out for it if they want to remain top dog in the technology race. I wonder what Steve Jobs would have made of this, may he rest in peace!

The project is just one of several being worked on by Google X Lab’s team of crack engineers, which includes Babak Parviz, an electrical engineer who has also worked on putting displays into contact lenses; Steve Lee, a project manager and “geolocation specialist”; and Sebastian Thrun, who developed Udacity education program as well as working on their self-driving car project.

Naturally, this news is causing a great deal of excitement, but I can’t help but wonder if certain people – not the least of which is William Gibson – aren’t getting just a tinge of self-satisfaction as well? You see, it was this Vancouver-based, American born purveyor of cyberpunk that predicted both the use of “cyberspace goggles” and augmented reality many years ago. The former were featured extensively in his Sprawl Trilogy and a similar device, known as Virtual Light glasses, made several appearances in his subsequent Bridge Trilogy.

What’s more, his latest books (known as the Bigend Trilogy) also made extensive mention of Augmented Reality before most people had heard of it. Beginning with Spook Country (2007), the second book in the series, he described an artist who used wireless signals and VR goggles to simulate the appearance of dead celebrities all over LA. This new type of touristic art, known as “locative art” was the first time AR was mentioned in a pop culture context. In his third book of the series, Zero History (2010), he mentions the technology yet again but says how it has been renamed “Augmented Reality” now that its more popular. As always, Gibson was on the cutting edge, or just ahead of the curve.

Click on the links below for a little “light reading” on the announcement: