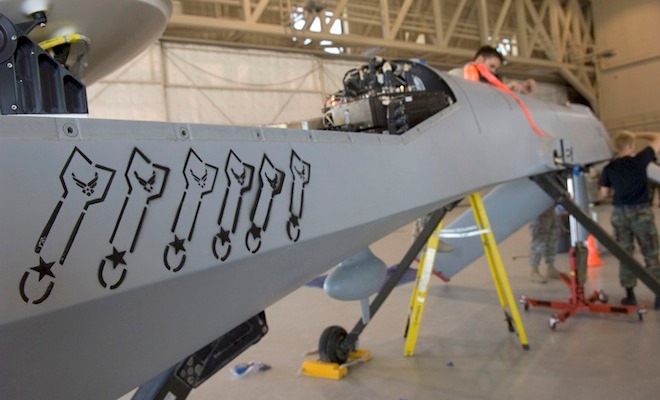 People concerned about the use of drones might remember fondly how President Obama, in a speech held late last month, promised that the “drone surge” was effectively at an end. As it turns out, it took the President and his administration only eight days to break that promise. In a new strike, which killed four people it has been made clear that the clandestine war continues.

In Obama’s speech, he contended that “Beyond the Afghan theater, we only target al-Qaida and its associated forces, and even then, the use of drones is heavily constrained.” Among those constraints are the use of detainment instead of execution, and “respect for state sovereignty”. Perhaps most importantly, Obama underscored the drones will for now on only target “terrorists who pose a continuing and imminent threat to the American people.” 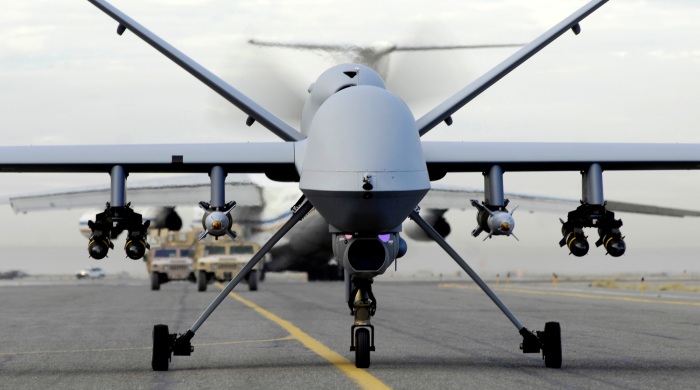 To clarify this point, the White House even released a fact sheet clarifying whom it will and will not kill in the future. It stated that:

However, this latest strike, which took out Wali ur-Rehman – the second in command of the Pakistani Taliban – and three other members shows that this is anything but the case. Rehman and his ilk are not members of Al-Qaeda, nor do they represent a terrorist group that is targeting the US and its citizens. Most importantly, they are not operating inside Afghanistan.

Fact is, Rehman and his compatriots pose a threat to only Pakistan, which is involved in an ongoing war with fundamentalist factions in its western provinces. They are the enemies of the Pakistani state, which is a nominal ally in the war on terror and with the war in Afghanistan. This makes his execution at the hands of the US a matter of protecting political and strategic interests, not anti-terrorism.

What’s more, there are indications that this strike may have been counterproductive for Pakistan. Pakistani military sources told Reuters in December that Rehman was “a more pragmatic” leader than incumbent Hakimullah Mehsud, with whom Rehman was said to be feuding. While Rehman was said to pursue reconciliation with the Pakistani government, the Pakistani military officers speculated that his rise “might lead to more attacks across the border in Afghanistan” on U.S.-led forces.

So any way you slice it, this latest drone strike was a clandestine operation made by a government that claimed to be finished with such things. Lucky for us, there may be a way to gleam the truth about the secret history of the drone war and their ongoing use as tools of government policy.

As it turns out, there are ways to hack and record drone video feeds to see what they see right before they unleash death and destruction. And in an ironic twist, much of the credit for this revelation may go to a group of Iraqi insurgents. In 2008, U.S. troops in Iraq declared that Shi’ite insurgents had figured out how to tap and record video feeds from overhead American drones.

Building on this, Josh Begley, a 28-year-old NYU grad student, is creating a software application that will allow anyone with basic coding skills to organize, analyze and visualize drone-strike data from Pakistan, Yemen and Somalia dating back to 2002. Based on information collected by the U.K. Bureau of Investigative Journalism, the Applicable Programing Interface (API) can be used to create interactive Websites that elaborate on the information and give it context.

The drone API, which is actually Begley’s master’s thesis, is not his first foray into capturing robot-attack data. His @dronestream Twitter feed documents all reported UAV attacks. Last year Begley created an iPhone app that tracks drone strikes, but Apple rejected it. Other developers have jumped on the bandwagon, too. London-based artist James Bridle runs a Tumblr blog that matches overhead satellite imagery to reports of drone attacks.

In an interview with Wired’s Danger Room, Begley explained that the purpose behind this software is the desire to bridge the “empathy gap” between Western audiences and drone-attack victims:

To Americans like me, what may have previously been blank spots on the map all of a sudden have complex stories, voices of their own. From 30,000 feet it might just be cars and buildings. But there are people in them. People who live under the drones we fly.

The public release of Begley’s API, which took five months to complete, is timed to coincide with the White House-promoted National Day of Civic Hacking on June 1. Hacking Day aims to “liberate government data for coders and entrepreneurs.” The ACLU, for one, is commemorating the event with an API linked to the group’s vast database of documents related to U.S.-sanctioned torture of terror suspects. 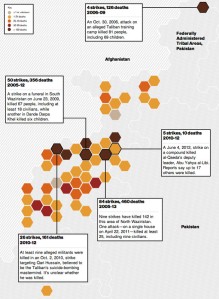 After twelve years of drone strikes and promises that don’t appear to be being honored, the arrival of this app might just be what the public needs. And even though software giants like Apple may not be interested in developing it further, there are no shortages of talented individuals, professional hackers and hobby labs that will take up the cause.

It wouldn’t be too farfetched to think that a plethora of websites will begin to emerge that can track, monitor, and record all drone strikes, perhaps even as they happen. And combined with recent revelations about state-run data mining operations and software that is being designed to combat it, private citizens may be able to truly fight back against clandestine operations and government surveillance.