After doing my due diligence to learn what I could about the Xenomorph for my post on Ancient Aliens, I found some interesting additional info that kept me reading. For one, I came to learn that there were a lot of details about the Alien universe that were revealed by Ridley Scott and James Cameron in the course of interviews, but never made it into the movies themselves. At the same time, there was plenty of info that made it into comics, novelization and other sources in the expanded franchise which fans of the movies would want to know about. There were a lot of mysteries in the Alien universe that were left deliberately vague, basic questions that never got answered.

Well, here are some of the answers that I found out:

This is the name of the race that built the derelict craft that crashed on LV-426 and was investigated by the crew of the Nostromo. Based on the design of the skeleton that was featured in the movie, and additional material from the alien comics, this race was apparently humanoid, very large, and had elephant-like trunks on their faces. According to all sources on the subject, the Space Jockeys are millions of years old and go by many different names.

In fact, “Space Jockeys” was the name the set designers came up with, whereas H.R Giger (the designer of the Alien) called it “The Pilot”. This second name was used in the video game AVG 2, where the aliens are known as Pilots and examples of their technology as “Pilot Technology”. Yet another name comes from the novelization entitled Aliens: Original Sin by Michael Friedman, where they are known as the Mala’kak. Where they come from remains a mystery, but the fact that their ship was carrying Xenomorph eggs would seem suggests that there was some kind of relationship. Which brings us to question two…

I got to admit, I didn’t like this theory too much. Somehow, it made the Aliens less scary to know that they were cooked up in a lab as opposed to say, borne out of conditions we can hardly imagine on a planet we have yet to discover. However, I also have to admit that it fit with something I notice whenever I watch the original Alien movie. Compare the Space Jockey ship to the architecture of a Xenomorph hive. Do they not look similar? All those curved surfaces and H.P. Lovecraftian sensibilities? Would it be so crazy to conclude that the Xenomorphs inherited their sense of aesthetics from their creators?

However, there remains the question of why a derelict ship was discovered on LV-426 carrying eggs. Could it be that this was a simple transport that was hauling eggs for the sake of the war effort? If so, then the most likely scenario would be that the pilot became infected accidentally and crashed into the planet, programming the ship to send out a distress signal before his untimely demise. However, we won’t know that for sure until the new movie comes out (see below!) 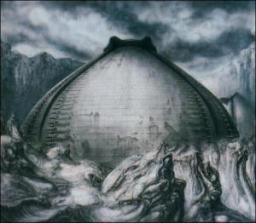 According to various sources, the Xenomorph homeworld is a hostile planet named Proteus.  Much like LV-426, it boasts a cold and harsh climate that is rife with volcanoes and turbulent wind storms. According to one theory, the planet is not the actual source of the Xenomorph species, but was used as a storage house by the Space Jockeys to contain and breed them.

The exact source of this info is unclear, but in the 2010 AvP video game, things end with Weyland Yutani discovering the location of their homeworld. This would seem to indicate that it will be revealed and/or detailed in the sequel. Also, the info on Proteus (as it stands) is clearly linked to the theory that the Space Jockeys were responsible for the creation of the Xenomorphs, so I can only assume that it came up in one of the AvP comics or novels.

Prometheus:
In the course of learning all this, I also came to learn that Ridley Scott has been dropping some serious hints of late. Apparently, the concept of the Space Jockeys, the Xenomorph homeworld, and the link between the two species will be explored at some length in the upcoming movie, Prometheus. For those who don’t know, this upcoming movie is a prequel to the Alien franchise where the crew of an Earth starship discover the derelict years before the Nostromo. Originally, I was planning on avoiding it. But successive previews and all the promised explanations are starting to get to me. Coming to theaters this summer, people!