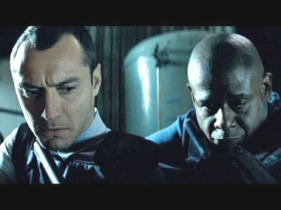 The following are the core concepts of the novel The Repossession Mambo, by Eric Garcia (the same guy who brought us Matchstick Men and the Anonymous Rex series). It’s 2025. Thanks to a company known as “The Union”, society has been flooded with artificial organs and just about everyone has one. They have saved and prolonged many a life, and cost a mint! And if you fall behind on your payments, a Repossession agent will come to your house, slit you from your navel to your neck, and retrieve it.

In short, its a dystopian future where a single company an unrealistic amount of power – the power to save live, the power to take it away. Most people are struggling just to make ends meet and as a result, the debt-ridden masses struggle to make their payments and stay alive. Right out of the annals of classic sci-fi. And with all the other cyberpunk concepts that have been done, I’m surprised someone didn’t tackle the issue of artificial organs sooner.

And, let’s face it, the premise is very much in tune with our day in age, released at a time when homeowners and families are struggling to avoid foreclosure on their houses thanks to a series of bad mortgages (and re-mortgages) that they were sweet talked and pressured in taking them in first place. Yes, for people coming through the worst economic crisis since the Great Depression, and who are used to dealing with punitive cost of privatized health care, this movie was sure to resonate. A wonder then why it did so poorly at the box office! 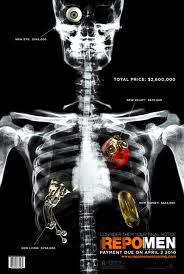 As already noted, the story opens on the US in the near future. Artificial organs, joints, and even a neurological matrix, have revolutionized life by ensuring that the terminally ill, crippled and people near brain death can live on happily, assuming they can pay of course!

Small hints are given as to what is going on in the world at large, all of it quite familiar and relateable to today. On the one hand, there is loose talk of an ongoing debt crisis and a crippled economy. There’s also the passing mention of US soldiers gearing up to go into Nigeria in what has been deemed “Operation: Hope Springs Eternal” (a parody on “Operation: Restore Hope” or “Operation: Iraqi Freedom” perhaps?)

Into all this, we get Remy (Jude Law) who appears to be writing a manifesto of sorts. He opens it with a reference to Schrodinger’s Cat, which any fan of Big Bang Theory will instantly recognize. He wonders how anything could be considered both alive and dead in the same instant, clearly alleging that his story illustrates just that. The movie then opens in a flashback sequence, all things building towards his session in a slum with an antiquated typewriter.

Basically, Remy was a Repo Man who, alongside his age-old friend and army buddy Jake Freivald (Forest Whitaker), is considered the best in the business. However, Remy’s wife would prefer it if he transferred to sales and stopped doing the grisly work of harvesting people’s organs for money. He agrees, but also tells Jake he will do one last job. He is nearly killed when his equipment (a defibrillator) shorts out and nearly kills him. He wakes up in the hospital and is told that he will need an artificial heart now. His angry, panicked reaction tells us all we need to know about his feelings on that 😉 After years of watching others get screwed over by The Union, he now is facing that very thing himself. 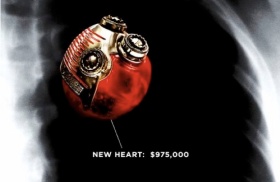 Naturally, he tries to go back to Repo’ing since his wife has already left him and he needs the money. But somehow, he just can’t bring himself to do it anymore. What’s more, time is running out on him making his payments. During a final attempt, he goes into a “Nest” – a slum area where people go to flee The Union’s repo men – where he is attacked and knocked unconscious.

He awakens to find a woman named Beth (Alice Braga) – a lounge singer that he’s seen playing clubs before – living in one of the abandoned buildings and decides to help her. After standing watch as she goes through withdrawal, he agrees to help her since they are in the same boat. Seems she has mucho enhancements, including artificial joints, organs, eyes, and ears.

He breaks into the company storeroom and begins filing the bar codes off of all the spare parts they currently have. No bar codes, no scans will be able to detect that they have organs with are past due. However, Remy is caught by his friend and told to get out while he can. Back at their slum lair, Beth has set him up with an old typewriter she found. He sets to work banging out a “cautionary tale” about what he did and what he’s learned, until at last a repo man finds them and they are forced to kill him. Naturally, Remy outsmarts the man and he dies, but Beth is injured in the course of things. They are then forced to find a black market dealer who will fix her up, which takes them to another “Nest”. 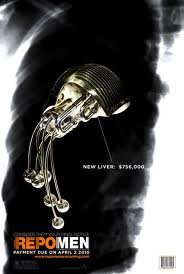 Unfortunately, Jake finds them there and reveals to Remy that he is responsible for shorting out his defibrillator. By forcing him to meet the payments of an artificial organ, he figured his friend would never leave the business. The two fight, and in the course of it, Remy is knocked unconscious. What follows is a total mind-f*** which is comparable only to Inception! I shall break it down succinctly.

Basically, Remy wakes up to find that Beth incapacitated Jake. They then flee together and decide the only way they can resolve this is to break into corporate HQ, find the “Pink Door” where repo personnel make their returns, and physically scan their organs. After an over-the-top scene where Remy fights everyone between him and the “Pink Door” (which is ridiculously labeled as such), they break in and begin performing field surgery on themselves so they can scan the bar-codes.

Jake and their boss walk in a moment later, and Jake decides to switch sides and kills their boss. They blow up the repossession machine together and escape to the tropics, where Remy has apparently published his manuscript under the name The Repossession Mambo. However, this idyllic scene is interrupted when things begin to get fuzzy and some hiccups appear, as if it were all a recording…

Oh wait, it is! You see, in real life, Remy was rendered near brain-dead from the blow Jake gave him. The medics who arrived shortly thereafter hooked him up to one of the new neurological matrix’s in order to keep up his brain function. Hence, all this stuff about beating the company and escaping to the tropics was all a lie. Jake also tells them to leave Beth (unconscious but not dead) alone for him to deal with later. He then picks up Remy’s manuscript and notices the title, the same one featured in his little reverie.

I seriously wasn’t expecting that, but respected the movie more for the little dystopian twist at the end. It was in keeping with the whole tradition of cyberpunk tales, making sure that things like happy endings only happen in the movies… or not!

Final Thoughts:
I’ll be honest, this movie didn’t suck. It was very hard to take Jude Law seriously as a cynical, bad-guy, but for the most part, it was ably acted. It was also hard to believe that a former jarhead turned repo man, a man who for all intents and purposes seemed to like killing and didn’t care about the pain he caused, could maintain a marriage and a family. Somehow, these two sides of his personality didn’t fit. And lastly, the gore level, especially in that scene behind the “Pink Door” seemed gratuitous. It’s like, if they can invent scanners that can read a bar code through flesh and clothing, why do they need to slice opens their own bodies to scan the bar-codes for the big machine? I might have mentioned that the fight scene which brought them there was also pretty stupid, but of course, that was all in a dream! Technically, it doesn’t count 😉

But other than that, I actually liked this movie. It had plenty of thematic elements which landed for me. For one, there was the issue of a company pressuring people to sign-up for a product no one seemed to be able to afford. The scenes where we see the salespeople do their thing, or the boss’s BS about “you owe it to your family to do this” and “we can come up with a plan that fits your financial standing” were just too perfect. Tell me that wasn’t a parody of the banking industry, pressuring people into taking sub-prime mortgages when they could barely afford their current payments!

What’s more, the high costs of the new organs, which people had to turn to payment plans, credit, and whatever else to afford were clearly a reference to the health care crisis in America. People need life-saving procedures, have no choice but to sign up for them unless they want to die and leave their families behind. But in the end, its more than they can afford, and all the smarmy reassurances of the salespeople can’t change that very fact.

Yeah, it kind of bombed at the box office, but I’m thinking that rentals, DVD sales and Netflix might help it recoup its losses. And I strongly recommend people, at least those who aren’t turned off by blood and gore, take the time to watch it. If you’re a fan of dystopian sci-fi, you might just like it. And if you’re a writer of dystopian sci-fi (for example, me!) then you might just find it inspiring.

5 thoughts on “A Review of Repo Men, the movie”