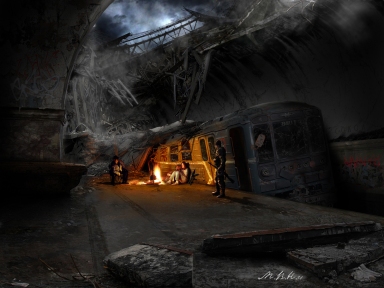 A few days ago, I went looking for pictures which I felt perfectly encapsulated the story I was going for. I wanted something that spoke of desperation, of shock, awe and terror, yet also captured the drive and determination of people who had to continue no matter what. This print is what I found…

Beautiful isn’t it? Not to mention inspiring. It is for this reason that I chose to post it as the chapter header for Crashland – chapter 2, which is appearing now at Story Time.me. For those who don’t know, this is serial website where audiences get to vote on how they want the story to unfold. The first chapter is a set-up for the rest of the story which develops through audience participation.

In the case of Crashlands, the audience was given an apocalyptic scenario where the world of the near future was brought to its knees through infopocalypse. In the opening chapter, the story’s main character, William Holden, found himself along in the streets of the darkened city hoping to find help. It ended with him being confronted by a series of dark shadows, men he suspected meant to do him harm. Audiences were asked what Holden should try to do… Run away, attack the men, or try to reason with them.

After days of letting the votes come in, it seems the audience has spoken. Option C is how things will unfold! Come on by and check out Chapter 2 and see what comes of Holden’s attempts to talk his way out of this mess!