Games of Thrones is now well-passed the midway mark, and some things are becoming clear. Much like with season one, their are some changes, some additions and some subtractions, but the end product is still quite faithful. And with things coming to a head vis a vis the war in the south and things beyond the Wall, I thought it was time to delve back in and examine the various episodes so far.

Episode 3: What is Dead May Never Die

In King’s Landing, Tyrion begins to plot a series of alliances, and uses them to flush out Cersei’s informant, which turns out to be Grand Maester Pycelle. In the end, he chooses to send Myrbella, Cersei’s only daughter, to Dorne to marry the Prince of Sunspear. In the Stormlands, Catelyn arrives to entreat with Renly, who is moving towards King’s Landing with a huge force, but still must meet with his brother to decide who shall be king.

North of the Wall, Snow and the Brothers are forced to head north after Craster discovers John spying on him. Lastly, Arya’s group is attacked in the night by the Kingsgaurd and taken to Harrenhal. And on the Iron Isles, Theon Greyjoy arrives to find that his father plans to conquer the North, and decides to join him.

Right off the top of my head, I noticed several things which were consistent with the text. Tyrion’s ruse to flush out Pycelle for one, that was right out of the story and performed quite faithfully. The way he sought to find a position for Shae, his courtesan was trimmed down, but still quite accurate. And Theon’s perspective, the way he returned to Pyke to find that his family now considered him an outsider and the way he was torn, very true and bang on! Beyond that though, I noticed several big differences, but which worked out quite well in the end.

For starters, Arya was not taken prisoner so quickly after her party was discovered by the Kingsgaurd. After freeing Jaqen H’gar and the other prisoners, she, Gendry, Hot Pie and Lommy ended up making their own way north for some time before they were captured by the Mountain (Gregor Clegane), the Tickler, and his party. Only then were they brought to Harrenhal. 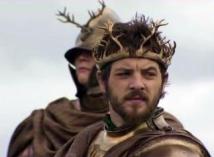 lso, the extended parts where we see Renly, Sir Loras and Margaery Tyrell talking about their plans and carrying on with their triangle, I’ll have to check, but I don’t recall any of that happening in the book. After Catelyn arrived in Renly’s camp, the majority of that thread was spent talking about Brienne, and the adversarial relationship between Renly and Stannis, and their negotiations for some kind of alliance. Some hints were given that Renly preferred the company of Sir Loras, but nothing of this sort was ever shown or talked about.

But this really didn’t matter. In the end, these changes were quite effective, either cutting down on things which really didn’t need to be shown or expanding on things which could use them. I even wondered when I read book II why the affair between Renly and Sir Loras wasn’t being detailed more now that he was getting married to Margaery. He marries the woman who’s brother he’s bedding, one would think this would raise certain complications, especially if she knew! 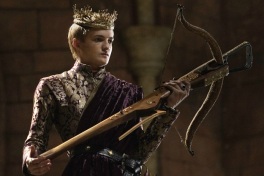 After wandering in the Red Waste for so long, Daenerys is invited to the great city of Qarth where her reputation as the “Mother of Dragons” is already gaining her notoriety. At King’s Landing, Tyrion and Bronn try to find a way to temper Joffrey’s cruelty for Sansa, whom he blames for Robb Stark’s latest victories.

In the Stormlands, Renly and Stannis meet for the first time and years and entreat with each other. However, talks break down when neither man is willing to give ground and Melissandre begins to unleash a dark power to kill him.

In Harrenhal, Arya and Gendry are placed in the docks to await torture. They are narrowly saved when Lord Tywin arrives and decides to put their talents to work. Theon still gets the short end of the stick from his father, who hands control of the bulk of their fleet over to his sister. He vows to outshine her however he can. And in the North, John and the Night’s Watch arrive at the ancient fortress known as The Fist of the First Men.

This episode was especially good in two respects. For one, it finally delved into the the thread involving Daenerys’ and her host after three episodes in which she was practically absent. Second, it was in this episode that audiences got to see Harrenhal for the first time, which I anticipated would be a challenge given the description of the massive but ruined fortress. Beyond that, the episode was the usual mix of changes and faithful adaptation that characterize this series.

Of those changes: In this episode Robb gets to meet his future wife, Talisa Maegyr, while campaigning in the Lannister lands. This never happened in the book. In fact, we never even got to meet her until he returned to Riverrun and announced that he had taken a wife, thus endangering his alliance with House Frey.

There is also the scene where Joffrey decides to torture the two prostitutes which Tyrion sent him as a “gift”. This is actually an ongoing difference with the series, where the character of Ros continues to make appearances that never happened in the novel. I’m guessing this was an executive decision on behalf of the creators, who probably guessed that her perspective from season one was something worth continuing.

Finally, there was the scene where Davos Seaworth, Lord Stannis’ loyal Captain, travels with Melissandre to an underground passageway in order to unleash the dark shadow she carries within her. This scene actually took place later in the book when Stannis had unready assassinated his brother and was now using a similar shadow to kill the Lord of Stormwatch, the border fort which was holding out against him. This is why the shadow is being unleashed in an underground passageway, because it was the only way to get into the fort.

Instead, this is all amended in the show to make Renly the intended target while he is in his encampment in the Stormlands. Much like the way they trimmed the plot in episode 3 where Arya and Gendry are captured, they cut out a middle portion in order to make things conclude more quickly. This is not a bad thing, mind you. These and other scenes did a good job of adapting material from the text to the screen. And as usual, there is plenty which was accurate and praiseworthy. The depiction of Harrenhal, a massive burned fortress which Tywin Lannister commander his armies from, was beautifully shot in this episode.

And though Qarth only got the barest introduction, it was a good start as far as depicting a near-Eastern inspired metropolis was concerned. The artists who detailed the cityscape were clearly inspired by Renaissance depictions of what ancient Alexandria, Babylon and other Oriental paradises were thought to look like. And of course, they way they depicted Joffrey’s sociopathic nature, which always seemed to involve a crossbow in the story… quite apt!

So far… so good. Stay tuned for my next post, in which I will cover episodes 5 and 6, where Ygritte and Qorin are introduced, Theon sacks Winterfell, and Arya gets a visit from an old friend who owes her one… or three. Stay tuned!