Welcome back! As promised, the second half of my nostalgic, cult classic favorites for you to peruse! Let me know what you think, and feel to add some contenders of your own. Cult hits are nothing if not personal, and what constitutes a classic is open to interpretation. Okay, six to ten, here goes: 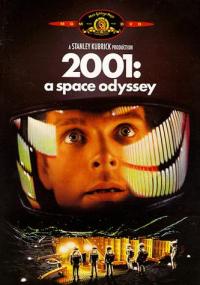 Yes, this movie deserves top billing for being a classic! And yet, the movie really doesn’t seem to garner much appreciation from audiences, not unless they are self-professed film buffs or hard sci-fi fans. Not sure I qualify for either, but I loved this movie for the simple reason that it was packed full of mind-blowing themes. Much like Akira, it was chock-full of things that got my young mind thinking and completely shaped my outlook on science fiction.

Sure, there are those who complain that this movie is boring and esoteric, but I found all that a fitting price for the kick-ass subject matter, not to mention the mind-blowing climax. You got a mystery, speculations about human evolution, ancient aliens, space exploration, and existential singularities! All the while, the weight of the philosophical implications are weighing at your mind…

And let’s not forget how inspiration this movie proved to be. Today, the concept of ancient astronauts, aliens who came to Earth millions of years ago and tampered with human evolution, has become all the rage. From Star Trek to Stargate, Battlestar Galactica to Prometheus, the concept of ancient astronauts has played out. And frankly, 2001 has them all beat! Between Kubrick and Clarke, their concept of the aliens and how they altered the course of evolution on Earth was the most realistic I have ever seen.

But I think what I liked best about was the fact that the movie was the subtle nature of the whole thing. At once speculative, philosophical, and visually stunning, this movie was characteristic of Kubrick, who preferred to convey things visually rather than coming out and telling people what was going on. You never really quite knew what happened during that eye-popping final scene, but those who love sci-fi and imaginative filmaking were sure to have ideas!

Granted, this movie wasn’t exactly under-appreciated, but compared to the lavish attention the rest of the franchise has garnered- even though it was all downhill after Aliens – this first installment truly was the diamond in the rough. Not only did it have a cool concept, awesome set designs and a kick-ass back story, the direction and cinematography captures the story’s sense of dread and claustrophobia perfectly.

Little wonder then why this movie spawned an entire franchise, because it really did have everything. You had your blue-collar peeps working for the major interstellar company (Weyland-Yutani), a frightening discovery made on an uncharted planet, a mysterious derelict belonging to an unknown race, and a terrifying creature awakened from its slumber. And not just any kind of creature, but a complex symbiote that was designed for and possessed of a single purpose.

Or as Ash put it: “Perfect organism. Its structural perfection is matched only by its hostility.” He had a point didn’t he? In fact, all structures in this movie were pure genius, whether it was the Nostromo, the Derelict, or the Facehugger and Chestbuster combo. As with everything Scott does, attention to detail and the careful construction of a universe was paramount. Every set was richly detailed, well shot, and clearly made to elicit the right feel and impressions on the audience.

Much of the credit for this goes to H.R. Giger as well, the surrealist artist who brought Lovecraftian horror to the alien concept and set of the alien ship. Years later, I still find myself tuning in just to get a glimpse of that Gothic reconstruction, or to see the Space Jockey sitting in its chair, the tell-tale hole punching through its chest. Few movies have managed to capture that same sense of awe and wonder for me, with the possible exceptions of 2001 and Akira 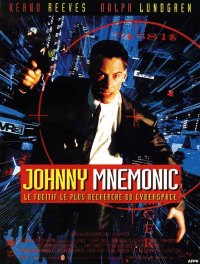 Some people might think I’m crazy for listing this movie as a personal classic, but it can’t be helped! And my reasons are pretty simple. On the one hand, this movie kind of has that “so bad, it’s good” thing going on, but at the same time, I also felt it possessed some real signs of quality. Sure, the acting was pretty wooden, the fight choreography total crap, and the low-budget nature apparent throughout. But it was still a pretty faithful adaptation of Gibson’s work and introduced to that world at a still-young age. Hence why I come back to it every few years just to see it again.

Filmed in the mid-90’s, this movie is an adaptation of the short story by William Gibson and previewed a lot of what he wrote in Neuromancer. For example, you’ve got the big bad corporations, the cyberspace jockeys, freelance assassins, Yakuza, and the character Molly Millions. Things are also set in “The Sprawl”, the megapolis that stretches from Boston to Atlanta and is contained in geodesic domes, and the look and feel is definitely of the cyberpunk variety.

Into all this, Gibson introduced the revolutionary concept of mnemonic couriers, people who have “wetwire” implants in their brains that allow them to carry vast quantities of data from point A to point B. Basically, these couriers are the answer of what to do in a world where information is the most precious commodity, and all databases are vulnerable to hacking and protected by “Black ICE” – hostile Intrusion Countermeasure Electronics (aka. viruses)

And, in keeping with Gibson’s style, the story involves a titanic corporation that is fighting to maintain its monopolistic grip, while freelancers, smugglers and assorted little people are fighting to undermine them and distribute the information freely. Naturally, the main character of Johnny is an unlikely hero who is forced to take a break from looking out for number one and help others for a change. Might sound cheesy, and a little cliche, but it works and delivers on Gibson’s style. At the very least, it’s a guilty pleasure flick for me. 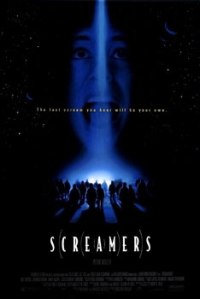 Now here’s a movie that’s high on the pleasure, low on the guilt. While a low-budget sci-fi flick that was (like Johnny Mnemonic) produced and filmed entirely in Canada, it had many signs of quality that immediately made it a cult hit. There’s the post-apocalyptic setting, the frightening tone, and the Cold War feel of the thing, updated for the 90’s. All the while, there is the knowledge that this is an adaptation of Philip K. Dick’s Second Variety, which sort of makes it a must-see of PKD fans.

Much like in the original story, the plot of the film involves a race of self-producing, self-upgrading machines that are designed to infiltrate enemy territory and eliminate all combatants. But of course, things begin to go awry when the people who produced them realize that they have upgraded to the point where they can impersonate human beings. And whereas the original story was set on Earth and took place between the US and Russia, the updated story takes place on Sirius 6b, a pining planet that became the front line between a the political-economic entity known as the NEB  and those who chose to resist its rule.

Personally, I felt the updated version works. Not only does the conflict seem more relevant, being between a mega-corporate entity and a coalition of workers and dissenters, but the off-world setting also feels more realistic. Perhaps it was the fact that in the post-Cold War world, nuclear war between two superpowers didn’t seem a likelihood anymore. Or it could just be that the whole NEB angle was reminiscent of Weyland-Yutani and Alien. All I know is, I liked it!

What’s more, a good deal of attention went into creating the setting and modelling the Screamers – aka. the automated machines that kill people. Designed to be the perfect terror weapons, they emit a high-pitched “scream” before making their attack, and can toy with their targets for some time before moving. This concept, combined with some good shooting, really created a sense of tension which is felt throughout. And of course, the paranoia which is engendered by the appearance of human-like machines was a very nice touch! A good movie, and a fitting adaptation which managed to capture PKD’s cautionary tale about the dangers of runaway progress. 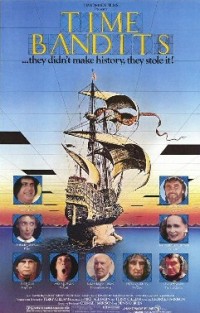 And last, here is the classic time traveling tale that I first saw in my childhood. Recently, my wife was told by a coworker that she should ought to see it, and my memory was jogged! Yes, this is indeed a cult classic, and one which is deserving of plenty of kudos and praise. Well cast, well written, witty and poignant, it’s one of those quintessential 70’s movies which has been rediscovered by several generations of film buffs and sci-fi fans.

The story opens with an imaginative and historically-minded child who lives in an overly-bourgeois neighborhood with his materially-possessed family. But upon realizing that there is a time-portal in his wall and that people from the past and future can come through it, his world is turned upside down. Quickly, he become the unwitting companion in a group of dwarves who are traveling through time, stealing precious artifacts, and being pursued by both the “Supreme Being” and an evil sorcerer.

Immediately, one can see the layered and inspired plot taking shape here. On the one hand, you have some decidedly Judea-Christian elements, plus a tale of childhood imagination and escapism. The dichotomy of the Supreme Being who possesses the power of time travel and the sorcerer who wants it for himself are representative of God and Lucifer, after a fashion. The dwarves who stole this power for themselves are a sort of Icaran allegory, or possibly Adam and Eve once they ate from the tree of knowledge. And ultimately, the way they are saved in the end from evil represents their redemption.

All the while we are left wondering if the boy is merely dreaming, or if what he is experiencing is real, which is an element that is intrinsic to all tales of childhood fantasies. On the one hand, the protagonists flights of fancy are seen as a weakness and immaturity to those around them, whereas we tend to see as it a rare gift to see past the surface. Should it all be a fantasy, then the story is left without a formal sense of resolution; but if it is real, then the hero has been vindicated and proven right. Appropriately, the movie plays with the two possibilities, going back and forth, but then giving strong hints at the end that it was in fact real. So really, you have a story that is inspired, imaginative, and also suspenseful!

Well, that’s my top ten list for the best cult classic movies of all time. What’s yours? I know I have a few in common with some people ’round these parts, and I also know that a few were previously unheard of. Hence why I want to here from others. I have a feeling there are some which I need to see and would very much enjoy. Already, I’m poised to watch Sunshine, A Boy and His Dog, and a few others which I’ve heard good things about. And I hope that in the course of swapping lists, I might be able to find a few more I’d like to see. Take care, and enjoy the rest of the long-weekend, those of who are reading this in Canada. As for the Yanks in the audience, and the rest of the world for that matter, enjoy the work week 😉