Hello all and welcome back to my ongoing review of AMC’s The Walking Dead. Season three has now reached the halfway mark, and the two-prongedstory is beginning to really drop some bombs on us, the viewing public! After last weeks’ hefty dose of trauma – i.e. Lori dying and Rick finally snapping – I was curious to see how this week’s episode was going to lighten things up again. What’s more, I had to know if they had really killed Lori off, or that was just a screw to the audience to get them to tune back in for this week’s episode. Needless to say, they were messing around…

In short, the midway mark in this season saw the resolution of the prisoner situation inside the jail. After killing Andre, the escapee who vowed revenge, Axel and Oscar seem to be merging in with the rest. At the same time, the loss of Lori, Carol and T-Dog was mitigated somewhat by the arrival of a new member – Rick and Lori’s baby girl.

Meanwhile, over the in the town of Woodbury, the divide between Andrea and Michonne finally results in a break, with Michonne leaving and Andrea staying behind. However, after witnessing an evening of special festivities put on the Governor, Andrea begins to question her decision to stay. And it’s also abundantly clear from what the Governor has going on behind closed doors that he has not accepted the loss of his family and that that is what drove him to madness in the first place.

The episode opens on Rick, who is virtually catatonic after receiving the news that Lori is dead. His grief quickly turns to rage and he grabs an axe, proceeding inside to kill whatever remains of the Walkers who entered the prison. Meanwhile, Hershel tells them that the new baby needs formula or she can expect to die within a few days. Maggie and Daryl hop on his motorbike and make for a nursery which they observed in the nearest town. There, they find some diapers, formula, and a possum hiding in one of the closets. Daryl shoots the possum and declares they now have some fresh meat for dinner!

Meanwhile, Rick busies himself with cutting through all the Walkers that are still down below. Glenn tries to talk him down but fails, as Rick seems borderline psychotic and unreachable. After throwing him aside and going off to kill more, he finally finds his way to the room where Lori had her C-section and died. He finds a bullet in the floor and a blood trail leading into a passageway nearby, realizes that Carl couldn’t bring himself to shoot her and that she turned. After putting a bullet through the head of her bloated Walker corpse, he begins stabbing her swollen belly over and over…

Over in Woodbury, we find the Governor combing the hair of a small Walker, who apparently used to be his daughter. Her name was Penny, and it seems that he is keeping her secured in his office where no one can find her. Meanwhile, Michonne continues to investigate, hoping to find some evidence that the Governor is not who he appears to be. After retrieving her sword and reading some disturbing entries in his diary (which seem to involve the name Penny) she overhears the Governor and his men talking about holding some festivities. His lead researcher seems opposed to the idea, but eventually concedes.

Michonne then finds her way to where some Walkers are being kept in a cage and kills them all. When the Governor’s men catch up to her, he once again extends an offer to join him, but Michonne pointedly refuses (i.e. she points her sword into his chin)! At the mention of the name Penny, the Governor becomes quite concerned, as he thinks Michonne found her in his office, instead of simply reading her name from his diary. She makes one final attempt to convince Andrea to come with her, but fails. To her surprise though, they open the gates and let her go, leaving a saddened Andrea behind. 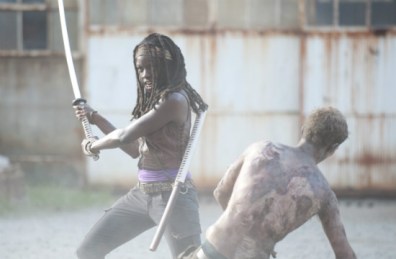 The Governor tells her to cheer up, as they are going to be having a special event that evening to cap off the celebrations that have been going on for days. However, she is horrified to find that the festivities are a bare knuckle fight between Merle and one of the other sentries, and the fight takes place in a ring surrounded by chained Walkers. The Governor explains its all staged and designed to make the people unafraid of the Walkers, but she is still incensed by it and leaves in a huff. 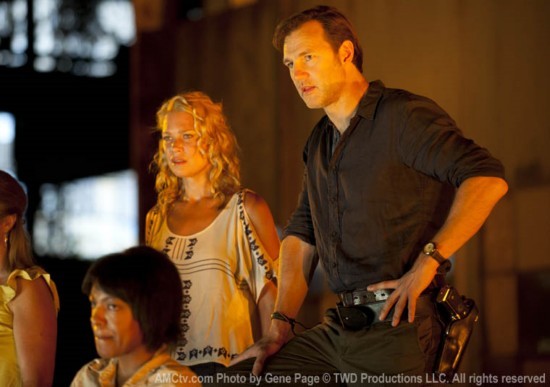 Glenn digs some graves for the dead, which accounts for one-third of their group. The deaths of Carol, T-Dog, and Lori are felt all around, but Glenn gets some unexpected help from Axel and Oscar who offer to help him dig graves. The baby also appears to be doing well, and Carl suggests naming her after those they’ve lost, eventually settling on his mother’s name. Daryl lays a flower on Carol’s grave, the same one he showed to her when they were looking for Sophie which commemorates the Trail of Tears and all the children that went missing there. And down in his cell, next to Lori’s corps, Rick is surprised to hear (amongst other voices in his head) the phone ringing, and picks it up…

Summary:
This episode excelled for a few reasons. For starters, we finally see the break between Andrea and Michonne occur, the timing of which couldn’t be better (or worse, in Andrea’s case). After finally telling Michonne she thinks her fears are groundless and she intends to stay, she gets a firsthand preview of the Governor’s madness. In time, she’s likely to get more, and her relationship with the Governor is likely to become strained, as Michonne’s was. This in turn is likely to lead to an escape attempt or a rescue attempt by Michonne. Needless to say, it won’t be pretty!

Second, this episode, picking up where the last left off with the prison debacle, showed that no one in the cast is safe. The loss of Carol and T-Dog was not too devastating since neither were main characters, but the death of Lori was nothing if not surprising. Rick is now experiencing a psychotic break, Carl is without a mother, and the group is reeling from the loss of a third of its members. This is in keeping with the spirit, if not the letter, of the graphic novel where no one in the cast is safe!

And I also liked what they did with the gladiator fight. It was an effective way of showing the Governor’s dark side, without being too over the top. Had she found the room full of heads, or simply been thrown into a dank cell full of corpses, that would have been too much. It’s much more entertaining and suspenseful to see the Governor turn bad as a result of an escalating situation between him, Andrea and Michonne. It also fits with his motivation, which is to keep his own safe from any and all threats, as he sees them.

Based on the previews which also came at the tail end, it has been hinted that Michonne will meet up with Maggie and Glenn while they are out searching for supplies, and that Andrea will attempt to flee Woodbury. I’m also looking forward to seeing just what the phone call was about, as it’s not entirely clear if Rick’s being contacted by the other members of the group, or if he’s experiencing a psychotic episode. Could go either way…

One thought on “The Walking Dead, Season 3 Episode 5”