At least once a day, the black hole that resides at the center of the Milky Way Galaxy – aka. Sagittarius A* – shoots out an x-ray flare. These flares range in luminosity and intensity, but are usually only on the magnitude of a few dozens times its normal output. However, back in February of 2012, astronomers using the Chandra X-Ray Observatory detected the brightest flare ever observed from the central black hole, measured at 150 times its normal output.

Located some 26,000 light years from Earth, Sagittarius A* emits X-rays on a regular basis, and no one is sure why. However, a group of researchers postulated that it may be the results of asteroids or planets that wander too close to the hole and are consumed. Essentially, they believe Sagittarius A* is taking in rocky objects, eating them up, and then shooting out x-rays as exhaust. 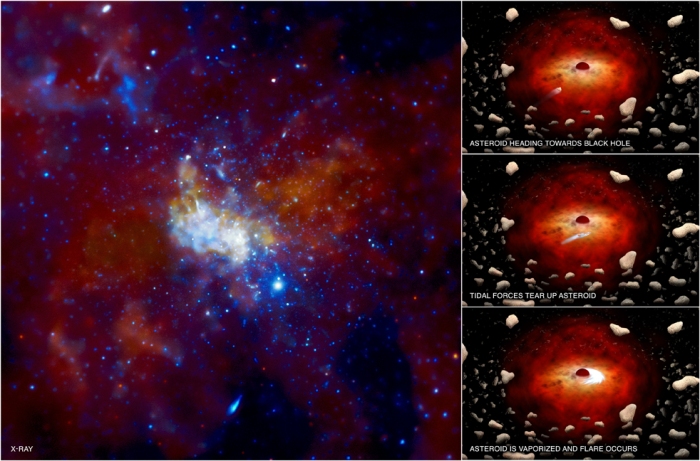 According to Michael Nowak, a research scientist at MIT Kavli and co-author of a new paper in the Astrophysical Journal, a sudden increase in consumption might explain the flare. “Suddenly, for whatever reason, Sagittarius A* is eating a lot more,” he said. “One theory is that every so often, an asteroid gets close to the black hole, the black hole stretches and rips it to pieces, and eats the material and turns it into radiation, so you see these big flares.”

This is the standard procedure that astronomers use to detect black holes – i.e. by the light energy given off as they swallow nearby matter – since they are invisible to the naked eye. Not only are black holes notorious for consuming matter, even light and gravity, the very fabric of time and space, are consumed in their maws. However, through an x-ray telescope, the centers of galaxies can appear extremely bright, giving off massive amounts of energy as they devour their surroundings. As they age, they tend to slow down, consuming less and appearing fainter.

Another MIT alumnist, Frederick K. Baganoff, has been conducting observations on Sagittarius A* with the Chandra X-ray Observatory since 2003, and in that time he has noted some interesting things. For example, he calculated that, given the amount of gas in its surroundings, Sagittarius A* should be about a million times brighter than it is — a finding that suggested the black hole throws away most of the matter they would otherwise consume.

Or as he puts it: “Everyone has this picture of black holes as vacuum sweepers, that they suck up absolutely everything. But in this really low-accretion-rate state, they’re really finicky eaters, and for some reason they actually blow away most of the energy… We’re really studying the great escape, because most of the gas escapes, and that’s not what we expect.”

The physics that underlie this process are still a mystery, but researchers like Baganoff hope to learn more through more observation. In the end, the real pay off is that it will help us to understand the history of activity at the center of our Galaxy, a history which goes back billions of years and can tell us volumes about the formation of our Milky Way and even the universe itself.

6 thoughts on “News From The Center of the Galaxy!”