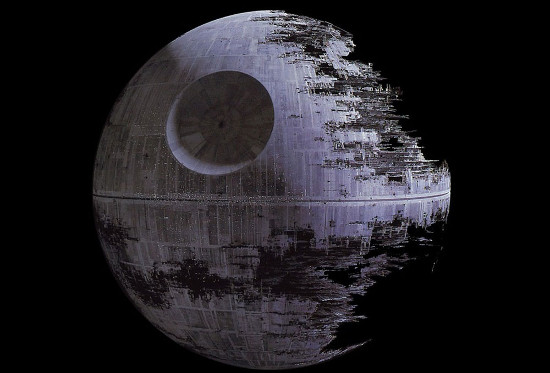 Remember a few weeks back when the White House was petitioned to conduct a feasibility study on the building of the USS Enterprise? Well, as it turns out, it received another petition at that time, similar in theme, but bolder by several orders of magnitude. The petition, which was filed in November of 2012 and got 34,435 signatures, was for the White House to build a real-life Death Star by 2016.

You read that right, a real-life Death Star. Yes, the petitioners seemed to think that the USS Enterprise wasn’t a big enough project, and the 20 year window for completing it too long. So instead, they recommend the Obama administration commit to building a massive, planet-destroying space station and to do it within the next four years.

And as it turns out, the petition got a response. Since it met the minimum requirement of 24,000 signatures, the White House was obliged to let the petitioners know exactly what they thought of their idea. Their answer came in the form of a cheekily titled document entitled “This Isn’t the Petition Response You’re Looking For”, and listed some of many, many reasons why the US couldn’t commit to such a program. Here is the opening section of the reply, as made by Paul Shawcross, chief of the Science and Space Branch at the White House Office of Management and Budget:

“The Administration shares your desire for job creation and a strong national defense, but a Death Star isn’t on the horizon. Here are a few reasons:

Not the cheekiness of the reply. He then went on to tout NASA’s accomplishments in the last few years, drawing attention to recent advances in robotics, the International Space Station, Curiosity’s Mission to Mars, commercial space flight, and the possibility of building an outpost on the moon. This, he claims, are evidence that “we are living in the future!”, after which he urges the petitioners to “Enjoy it,” and even encourages them to consider a career in science and space.

What’s more, the report was filled with many tongue-in-cheek Star Wars references. For example, at one point he states “Even though the United States doesn’t have anything that can do the Kessel Run in less than 12 parsecs, we’ve got two spacecraft leaving the Solar System and we’re building a probe that will fly to the exterior layers of the Sun.” Clever. If you ever want to draw attention to the Voyager spacecraft or the Solar Probe, just compared it to the Millennium Falcon.

He also mentioned President Obama’s hosting of the White House science fairs and astronomy events, where he playfully danced around with a toy lightsaber to the delight of the crowd, and how the Defense Advanced Research Projects Agency work on robotics and bionic limbs would lead to the creation of “Luke’s arm”. And the sign-off line left no doubts as to the tone of this response, playful, yet stalwart and optimistic:

“If you do pursue a career in a science, technology, engineering or math-related field, the Force will be with us! Remember, the Death Star’s power to destroy a planet, or even a whole star system, is insignificant next to the power of the Force.”

Take that, frivolous petitioners! You just got poned! To read the entire response (trust me, its worth your time!), click on the following link and be glad there are civil servants like this out there!