And I thought the month of February was an already exciting time for technological breakthroughs! But if a recent report from Nature.com is any indication, February will go down in history as the biggest month for breakthroughs ever! Why just last week, researchers in Natal, Brazil created the first ever electronic link between the brains of two living creatures.

The creatures in question were rats, and the link between their brains enabled one to help the other solve basic puzzles in real time — even though the animals were separated by thousands of kilometers of distance. The experiment was led by Miguel Nicolelis of Duke University, a pioneer in the field of brain-machine interfaces (BMIs), and a team of neurobiologists who’ve been working in the field for some time.

Here’s how it works: An “encoder” rat in Natal, Brazil, trained in a specific behavioral task, presses a lever in its cage which it knows will result in a reward. A brain implant records activity from the rat’s motor cortex and converts it into an electrical signal that is delivered via neural link to the brain implant of a second “decoder” rat. The second rat’s motor cortex processes the signal from rat number one and – despite being thousands of km away and unfamiliar with what rat one is up to — uses that information to press the same lever. 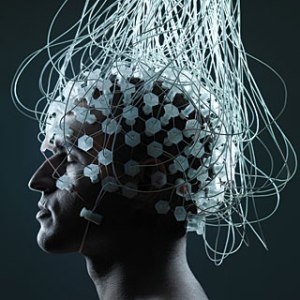 Back in 2011, Nicolelis and his colleagues unveiled the first such interface capable of a bi-directional link between a brain and a virtual body, allowing a monkey to not only mentally control a simulated arm, but receive and process sensory feedback about tactile properties like texture. And earlier this month, his team unveiled a BMI that enables rats to detect normally invisible infrared light via their sense of touch.

However, this latest experiment really takes the cake. Whereas brain-machine interfaces have long been the subject of research, generally for the sake of prostheses, a brain-to-brain interface between two living creatures in something entirely new, especially one that enables realtime sharing of sensorimotor information. And while it’s not telepathy, per se, it’s certainly something close, what Nicolelis calls “a new central nervous system made of two brains.”

Obviously, this kind of breakthrough is impressive in its own right, but according to Nicolelis, the most groundbreaking application of this brain-net (or n-mind) is yet to come:

These experiments demonstrated the ability to establish a sophisticated, direct communication linkage between rat brains, so basically, we are creating an organic computer that solves a puzzle. We cannot predict what kinds of emergent properties would appear when animals begin interacting as part of a brain-net. In theory, you could imagine that a combination of brains could provide solutions that individual brains cannot achieve by themselves.

Naturally, there are some flaws in the process, which were made evident by the less-than-perfect results. For starters, the untrained decoder rats receiving input from a trained encoder only chose the correct lever around two-thirds of the time. Those results could not be the result of random odds, but they are also a far cry from the 95% accuracy where the signals were reversed, going from the untrained decoder to the trained encoder. As any student of science knows, one-way results are not the basis of a sound process.

And I imagine the people who are lobbying to make biosoldiers illegal and limit the use of autonomous drones will be on this like white on rice! Hence why we can probably look forward to many years of research and development before anything akin to human trials or commercial applications of this technology seem realizable.

And of course, there is a video demonstrated the mind link at work. a word of warning first though. If you’re an animal lover, like me, the video might be a little difficult to take. You be the judge:

7 thoughts on “The Future is Here: Brain to Brain Interfaces!”