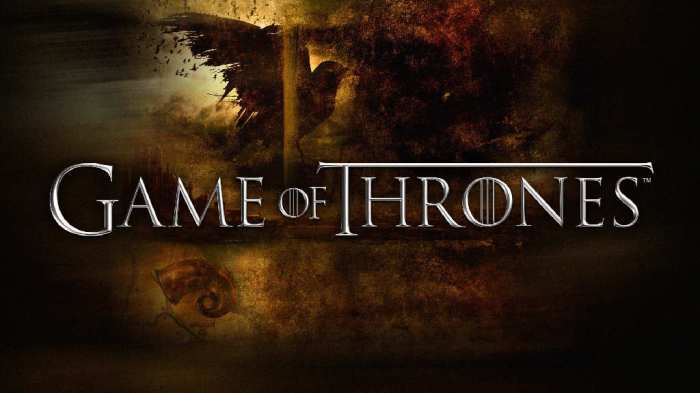 It’s Monday, and you know what that means! Time to recap on the latest Game of Thrones episode! And as usual, I was eager to see what would be happening this week. Not only was the name of this episode a clear reference to a major event in the story, they also seemed poised to  show us Yunkai, Daenerys’ next conquest. And there’s still plenty set to happen with Robb and the Freys, Arya and the Brotherhood, Bran and the Reeds, Cersei and the Tyrells, Brienne and Jaime, Sam and Gilly…

Well, you get the idea. By the third book, the story really began to multiply in terms of plot threads. It seemed like there wasn’t the tidy three points of interest of the Wall, Kings Landing and Essos as there was in the first book. Now, its a wartime saga and there’s plenty of people in plenty of places, all with their own story to tell and independent take on it all. So the show makers have their work cut out for them. 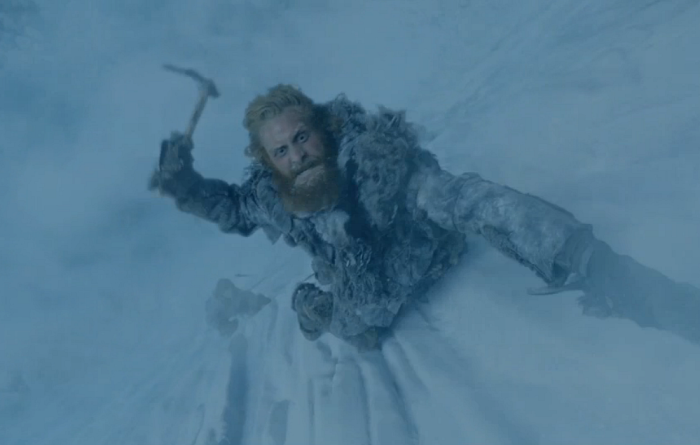 Things open in the north, where three of our main characters now find themselves. The first is Sam and Gilly, who are traveling south together after fleeing Craster’s Keep. The second is Bran, Osha, Hodor and the Reeds, who are heading the opposite way. And last, their is John and the Wildlings, who find their way to the Wall at last, and intend to scale it.

As they prepare to follow Tormund, who is reputed for having climbed it dozens of times, Ygritte tells John that she knows he is still “a crow” at heart. While not truly loyal to Mance, she does expect him to be loyal to her. With Tormund in the lead, they begin to scale the Wall. The climb proves treacherous as a section gives way, killing an entire war party in the process. John and Ygritte are almost killed too, but a last minute move by John saves the both of them. 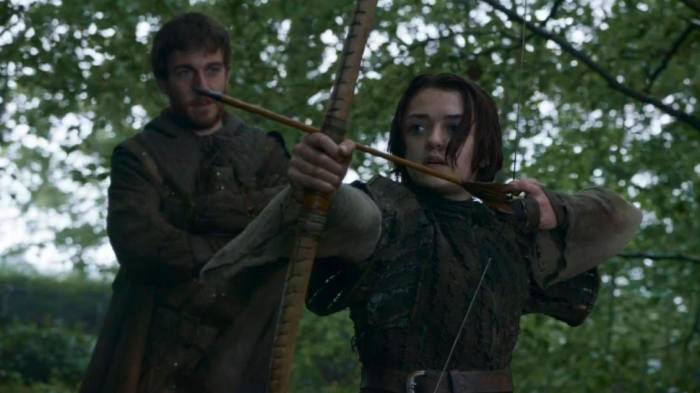 In the Riverlands, the Brotherhood are met by an unlikely visitor, Lady Melissandre herself, who entreats with Thoros. After raising the issue of his previous mission – which was to convert King Robert – she is taken to see Beric. She is astounded to see what Thoros has done with Beric, and tells them they have someone the Lord of Light needs – referring to Gendry. Since he has the “King’s Blood” – i.e. King Robert’s – he is fit to be sacrificed.

At Riverrun, Robb meets with the Freys emissaries to discuss the terms of their continued alliance. He is told that in exchange for an apology, the right to Harrenhal, and Lord Edmure Tully’s marriage to his eldest daughter, they will continue to be friends. Edmure is extremely reluctant, but is compelled since they need the Freys to win the war and because of his failure in engaging the Lannisters. They agree to the terms and plan to travel to The Twins for the wedding. 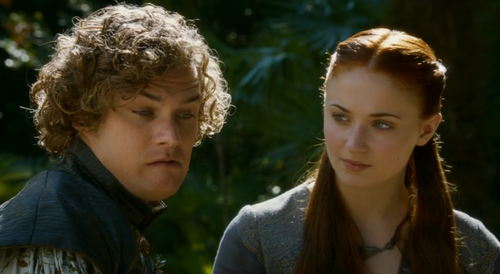 In King’s Landing, Tywin and Lady Redwyne discuss the possibility of Cersei marrying Ser Loras. Redwyne initially refuses, claiming Cersei is too old to bear him children. But Tywin, refusing to be denied, threatens to appoint Ser Loras to the Kingsguard, a move which will ensure that the Tyrells bear no heirs and the Lannisters will take over Highgarden down the road.

Tyrion and Cersei also discuss their impending nuptials, and Tyrion confronts her about the plot to kill him. He tells her that Joffrey is an idiot for ordering such a murder, but is told that nothing will happen as long as Tywin is around. Tyrion then meets with Sansa to reveal his father’s plan to have them wed, and she is naturally heartbroken. So is Shae, who is on hand to hear about it directly. 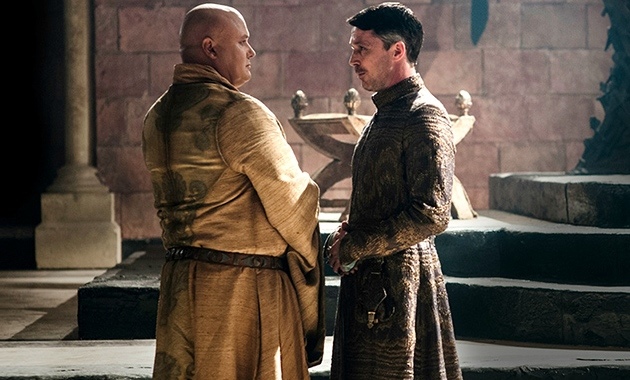 Varys and Littlefinger also exchange words in the Kings Hall, where he reveals that he found out about Varys plot to marry Sansa to the Tyrells. He further reveals that Varys’ source in the matter, his assistant Ros, has been removed from his service and has been handed off to “a grateful friend”. This turns this friend is Joffrey, who had her bound and then killed her with his crossbow.

At Harrenhal, Lord Roose Bolton meets with Jaime and Brienne, both of whom have recovered from their time with the Bloody Mummers. He agrees to let Jaime continue on to King’s Landing as recompense for the loss of his hand, but demands that Brienne stay behind since she abetted treason. Jaime is not happy about the decision, but is not in a position to make demands.

The episode closes with John and his party making it to the top of the Wall. Once there, Ygritte fulfills a lifelong dream of looking out at the world from the top. They stand together and share a long kiss…

Summary:
Well, as it turned out, this episode had a double meaning to it. On the one hand, there was the physical climb which John and the others accomplished as they scaled the Wall. On the other, there was Littlefinger’s diabolical speech about how chaos is “a ladder”, which some climb while others fall. And in this clever little double-entendre, the episode finds its true meaning. And overall, we got a fair dose of pl0t advancement, and a good heaping of machinations as all the interested parties continued to scheme.

But of course, there were some changes which once again, I feel obliged to note. Some were the result of previous changes which then forced these new ones upon the writers, but others struck me as being entirely out of the blue. In the case of the former, you’ve got Roose Bolton deciding to send Jaime Lannister on to King’s Landing. In the book, this didn’t happen, since by the time Jaime and Brienne made it to Harrenhal, it had passed back into the hands of the Lannisters.

On top of that, this decision really makes no sense here. Roose claims to be letting Jaime go as recompense, but also because he recognizes that Tywin will pay more or him. At the same time, he’s holding onto Brienne because she’s guilty of treason. Yet, by letting Jaime go, he’s committing an even worse one and putting himself in jeopardy with Robb. Vargo Hoat wasn’t willing to give Jaime back to his father for fear of losing his head, but Roose seems to have no such fears.

But of course, this is all necessitated by the way they cut out how Harrenhal came to be in the hands of Robb in the first place, plus that they rushed this plot thread to get Jaime and Brienne out of the wilderness sooner. And of course, there’s the plot thread involving Cersei’s impending nuptials to Ser Loras, which never happened in the book. True, Cersei was pissed that her father intended to marry her off again to cement alliances, but Ser Loras was never a candidate.

This might seem like a very minor point, but I realized this mainly because in this episode, Tywin makes a big deal about threatening to make Ser Loras a Kingsguard. In the book, that’s exactly what Ser Loras did, and it was because he wanted to so he could avoid being married off to a woman he knew he would not love. And since the Tyrells are gaining the throne through Margaery’s marriage to Joffrey, shouldn’t his threat of depriving them of an inheritance be baseless?

Which brings me to out-of-the-blue stuff, which here includes Gendry being hauled off by Lady Melissandre. Again, never happened in the book and I don’t see why they are doing it here. True again, Stannis needed Kingsblood to make a proper sacrifice to R’hllor, but that didn’t take place til much later and didn’t involve Gendry at all. After deciding to stay on with the Brotherhood, Arya and he parted ways (won’t say how, it’s coming up), and that was that. What they are doing with him here, can’t imagine where they’re headed with it, but I know it will necessitate changes down the road.

Which brings me to my final gripe, which has to do with Theon again. Once more, we have him on screen being tortured, and they don’t even reveal who has him or why. They pull a little misdirection by pretending his tormenter is the Karstark heir, but that of course proves to be false. In reality, he’s the bastard Bolton, aka. Ramsay Snow, and all this again just seems like a whole bunch of filler! But then again, so was Ros’ part, which came to an abrupt end this week since they decided to kill her off.

Looking back on my comments here, I can tell that I’ve become a bonafide Thrones geek, the kind who gripes about changes and nitpicks the inconsistencies between the books and the adaptations. But in all honesty, the longer this show goes, the easier it becomes to notice these things. Though it is still a kick ass series, the way they are diverging from the script can only get worse at this rate.

But of course, I still want to see what they do with it. If nothing else, it will be fun to watch!

P.S. Oh yeah, and they didn’t show Daenerys making it to Yunkai… again. When oh when is that going to happen? They keep showing it on the map at the beginning, when is she going to get there?! Like a few other gems that are yet to be revealed, this one promises to be pretty cool!