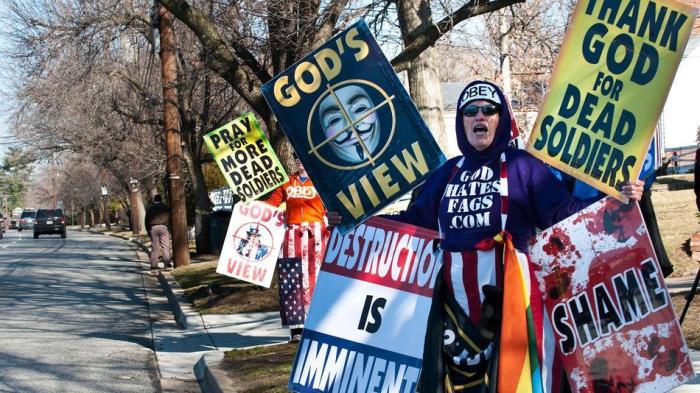 By now, I imagine everyone is familiar with the Westboro Baptist Church, the notorious ultra-militant Christian cult best known for its slogan “God Hates Fags”. Well, it seems that the group has expanded its message of hate, no longer content to celebrate the deaths of gays or of US servicemen and women –  with such slogans as “Thank God for dead soldiers” or “Thank God for IEDs”. Yes, it now seems they have widened their focus and chosen to embrace new tragedies in their quest to spread their message of hate.

These include such tragedies as the Newton, Connecticut shooting and the Oklahoma tornadoes. And while their efforts to protest the funeral of Principal Dawn Hochsprung – one of the many victims of the tragic school shooting – were thwarted by a group of good Samaritans, the group still managed to make some headlines for themselves with the creation of the website GodHatesOklahoma.com, claiming once again that the tragedy in Oklahoma was God’s judgement, and praising Him for taking the lives of the 24 people who were killed.

Clearly, the Westboro techs took the website down, because none of the content is avaiable for veiwing anymore. But according to some additional rumors, the person responsible was Jester, a relatively well-known hacker. This was indicated by the added message: “On the 8th day, God created hackers, and he saw that it was good. From the Gospel according to @th3j35t3r Redirecting in 5 seconds…….” After waiting, visitors were taken to a Red Cross donation site for victims of the storm.

@th3j35t3r refers to Jester’s Twitter account, which contained the message: “Westboro Faptist ‘Church’ – My God loves everyone, especially you. You need it the most”, followed by a link to an article at The Daily Dot which acknowledged his efforts. It is unclear at this time if Westboro will attempt to put their site up again, but given their inferior programming skills, I would imagine they’d not want to tempt fate, or the hacking community, a second time.

And might I take this opportunity to commend Jester and those like him. This incident, much like Anonymous’ exposure of the internet predator who ruined Amanda Todd’s life, shows how hackers can be a truly positive influence on society. Much those people who originally came together at MIT to found the “Hacker Ethic”, these individuals are proof that some people are still capable using technology for good and not abusing their freedom.