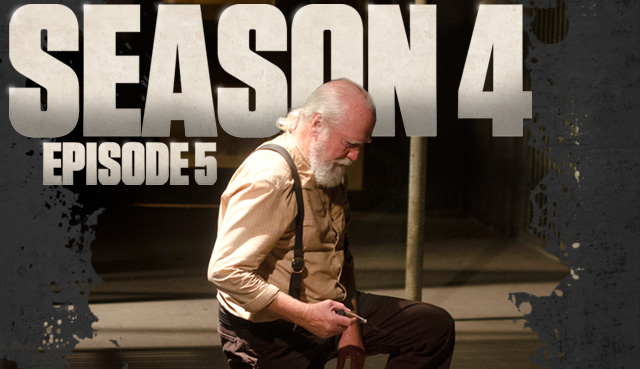 This past week, the fifth episode in The Walking Dead aired, and we got treated to some interesting developments. Not only did the plot advance as far as the epidemic was concerned, a rather important tidbit involving the larger story (which, for the sake of those who haven’t watched this episode yet, I shall save to the end) was finally revealed.

But what I found interesting about this episode was the structure. After four episodes where the story was split between the prison (with one or two things going on there) and the crew that was out looking for supplies, this episode was entirely focused on the prison itself. Here, we had two threads – one involving Hershel and the infected, and the other involving the situation in the yard.

Put together, these two threads were both extremely chaotic and mirrored each other in every respect. In truth, this episode should have been called “Pandemonium” rather than “Internment”. Given all the action and the palatable sense of panic, that name would have made a hell of a lot more sense!

The prison people continue to die from the flu and Hershel, Glenn and Sasha struggle to deal with it. Outside the quarantine zone, Maggie works alone to deal with the Walkers that are still converging on the fence and is there when Rick returns, alone. He explains that he had to let her go because of what she did to Karen and David, and asks her to keep it a secret for now.

Rick meets with Carl, who asks to help him outside but is again refused. He tells Rick that he cannot shield him from the death and insanity of the world forever, but Rick is determined to try. Hershel meets with Doctor Kaleb Subramanian, who is also sick now and near death. Rick comes to see him and is told that they are losing more, and are trying to dispose of them quietly to safeguard morale.

Sasha and Glenn get worse, the one collapsing from dehydration while Glenn begins coughing up blood. More people die and go unnoticed, which allows them to turn. Hershel is attacked by one of them and chaos ensues as others emerge and an uninfected woman is shot and killed by accident. Lizzie foolishly tries to talk a Walker down from attacking them. It tries to bite her and Hershel narrowly saves her.

Maggie runs into help while Rick grabs Carl and asks him to assist him in reinforcing the fence. Their supports begin to break, however, and another section completely caves in. Rick and Carl narrowly escape to a nearby guard tower and make to the second line of fences. Desperate, Rick and Carl load up with assault rifles and begin mowing them down! 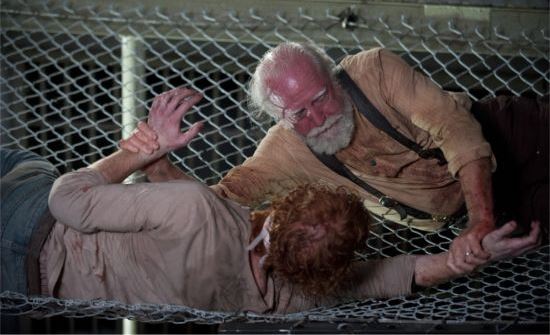 Back inside, Hershel is forced to arm himself as well almost everyone in the block appears to have turned. Grabbing a shotgun, he begins shooting Walkers as Maggie shoots her way into the quarantine zone. Hershel finds Glenn choking on his own blood and is forced to retrieve a tracheal tube and air pump from the last patient to have it, who is now a Walker.

Maggie comes to his aid and takes out the Walker with a well placed head shot. Hershel removed the device from his throat and comes to Glenn, fixing the bag to a fresh pipe and putting it down his throat. Glenn begins to breathe again and is saved. Outside, Carl and Rick go through the killing field they’ve made and dispatch the last of the Walkers.

Daryl and the search party return at last and Rick lets them in. Tyreese runs in to find Sasha alive and they begin administering the antibiotics to all those who are still alive. Hershel is told by Maggie to go rest now that the others are back and he’s no longer solely responsible for the sick and dying. He checks on Dr. Subramanian, who he was forced to stab after he turned, and cries as he holds his Bible.

The next day, the entire crew collects the bodies for disposal and puts the fence back up. Rick and Carl check on the gardens and see that the first of their vegetables are starting to come in. Hershel tells Daryl to talk to Rick about Carol, and then goes off on patrol with Michonne. Outside the gate, the Governor is seen watching…

Summary:
Much like last week, I have to say that I was generally impressed with this episode. While it did advance a few things that I suspected were coming and wasn’t really looking forward to, it was still cool to see how they played out. And I could really appreciate the action that was involved and the way the episode was very tightly written.

As I said already, panic and chaos run through this episode like a coiled snake. For some time now, they have been building up in this show how the prison is threatened from both inside and out. Outside their gates, there is a growing horde of Walkers who are being lured by someone, and the walls are beginning to buckle. Inside, they have an infection which has been spreading like wildfire, and the dead quickly turn into more Walkers.

In this episode, all of that hit the fan as the infection became out of control and a section of wall finally came down. And it was only by the desperate actions of those who were still inside the prison that they came through. Especially Carl and Rick, who chose to say “Screw all this keeping them out crap. Let’s just shoot the bastards!” Tell me that scene wasn’t totally boss! I dare ya!

However, the episode also played to a few things I was expecting without much enthusiasm. At this point, it looks like everyone who came from Woodbury, save for Lizzie and a handful of others are now dead. What’s more, its now been shown that the mysterious person luring the Walkers to the wall is indeed the Governor. Who saw that one coming? Everyone?

And according to next week’s preview, episode six – titled “Live Bait” – is going to be all about him. While I’m sure some fans are stoked about this, I can’t help but think the same thing I do every time I see him: “He’s supposed to be dead! Why are you dragging this out?” But of course, that goes for a lot of things this season. And clinging to the comic book isn’t really helping things much.

And so I’ve decided to put all that aside and start enjoying these episodes on their own merits. After all, they’ve done a good job so far this season, and them writers really know how to structure a good show! I can’t keep faulting them for the fact that they’ve chosen to deviate from the original plot, or trying to inflate the plot a little.

It’s television after all, and studios will do more of the same until audiences stop caring! So I plan to keep tuning in, and am interested to see what they do with the Governor at this point. I wonder if they’ll kill him off quickly, or keep him around to season’s end and make him part of it’s culmination. Only time will tell…

One thought on “The Walking Dead – Season Four, Episode Five”