China accomplished a rather major technological and scientific feat recently with the recent soft landing of its Chang’e-3 robotic spacecraft on Dec.14th. This was the nation’s first attempt at landing a spacecraft on an extra-terrestrial body, and firmly established them as a competitor in the ongoing space race. What’s more, the event has been followed by a slew of fascinating and intriguing pictures.

The first were taken by the descent imaging camera aboard the Chang’e-3 lander, which began furiously snapping photos during the last minutes of the computer guided landing. The Chinese space agency then combined the photos to create a lovely compilation video, with the point of view rotated 180 degrees, to recreate what the descent looked like.

The dramatic soft landing took place at 8:11 am EST (9:11 p.m Beijing local time) with the lander arriving at Mare Imbrium (Latin for “Sea of Rains”) – one of the larger craters in the Solar System that is between 3 and 4.5 billion years old. The precise landing coordinates were 44.1260°N and 19.5014°W – located below the Montes Recti mountain ridge. 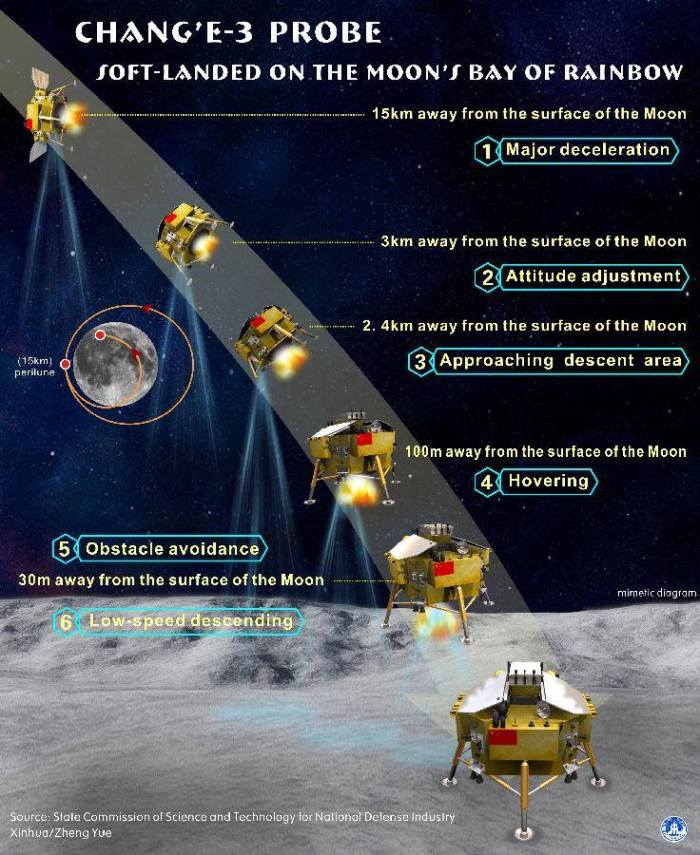 The vehicles thrusters then fired to pivot the lander towards the surface at about the 2:40 minute mark when it was at an altitude of roughly 3 km (1.8 miles). The powered descent was autonomous, preprogrammed and controlled by the probe itself, not by mission controllers on Earth stationed at the Beijing. Altogether, it took about 12 minutes to bring the lander onto the surface.

Roughly 7 hours later, on Sunday, Dec. 15 at 4:35 a.m. Beijing local time, China’s first ever lunar rover ‘Yutu’ (or Jade Rabbit) rolled down a pair of ramps and onto the Moon’s soil. The six wheeled ‘Yutu’ rover drove straight off the ramps and sped right into the history books as it left a noticeably deep pair of tire tracks behind in the loose lunar dirt. This too was captured by the lander’s camera and broadcast on China’s state run CCTV.

The next bundle of footage came from the rover itself, as the Jade Rabbit took in its inaugural photographs of the landing site in Mare Imbrium. The photos were released by Chinese state TV on Dec. 15th, not long after the rover disembarked from the lander, and were then pieced together to form the lander’s first panoramic view of the lunar surface.

Marco Di Lorenzo and Ken Kremer – an amateur photo-astronomer and a science journalist who have composed panoramas from the Curiosity mission in the past – also composed the images together to create a series of mosaics. A sample of the 1st panorama is pictured below, with the Yutu rover in the center and tire tracks off to the left.. Click here to the see the full-size image.

The individual images were taken by three cameras positioned around the robotic lander and captured the stark lunar terrain surrounding the spacecraft. The panoramic view shows ‘Yutu’ and its wheel tracks cutting a semi circular path at least several centimeters deep into the loose lunar regolith at the landing site at Mare Imbrium, located near the Bay of Rainbows.

Liu Enhai, Designer in Chief, Chang’E-3 Probe System, has this say about the images in a recent CCTV interview:

This picture is made of 60 pictures taken 3 times by the rover. The rover used three angles: vertical, 15 degrees tilted up, and 15 degrees down…so that we get an even farther view

The 140 kilogram Yutu rover then turned around so that the lander and rover could obtain their first portraits of one another. The first is visible above, showing the Jade Rabbit rover (in better resolution), with the image of the Chang’e 3 lander below. Liu Jianjun, Deputy Chief Designer of the Chang’E-3 Ground System, was also interviewed by CCTV, and had this to about that part of the mission:

The rover reached the point of X after it went down from the lander, then it established contact with the ground. Then it went to point A, where the rover and lander took pictures of each other. Then it reached point B, where it’s standing now.

These are just the first of what is expected to be a torrent of pictures produced by the rover, which according to Chinese officials, will spend the next year conducting in-situ exploration at the landing site. Beyond that, the rover will use its instruments to survey the moon’s geological structure and composition on a minimum three month mission to locate the moon’s natural resources for use by future missions.

In addition to accomplishing a great scientific feat, China has now joined a very exclusive club, being only one of three nations that has successfully conducted a soft landing on the Moon. The United States was the first, reaching the Moon with its Apollo 11 mission on July 20th, 1969. The Soviet Union followed less than a decade later, having reached the Moon with its unmanned Lunik 24 spacecraft in 1976.

And now, almost forty years later, the space race is joined by one of the world’s emerging super powers. Soon, we can expect the European Space Agency, India, Pakistan, and possibly Iran to be reaching the Moon as well. And by that time, its likely the spaceships will be carrying colonists. Hopefully we’ll have some infrastructure set up to receive them!

In the meantime, be sure to check out the Chang’e 3 descent video, and stay tuned for more updates from the Jade Rabbit and it begins its exploration of the Lunar surface.

One thought on “News from Space: Chang’e-3’s Landing and 1st Panorama”