Those who follow tech news are probably familiar with the name Neil Harbisson. As a futurist, and someone who was born with a condition known as achromatopsia – which means he sees everything in shades in gray – he spent much of his life looking to augment himself so that he could see what other people see. And roughly ten years ago, he succeeded by creating a device known as the “eyeborg”.

Also known as a cybernetic “third eye”, this device – which is permanently integrated to his person – allows Harbisson to “hear” colors by translating the visual information into specific sounds. After years of use, he is able to discern different colors based on their sounds with ease. But what’s especially interesting about this device is that it makes Harbisson a bona fide cyborg.

What’s more, Neil Harbisson is now the first person on the planet to have a passport photo that shows his cyborg nature. After a long battle with UK authorities, his passport now features a photo of him, eyeborg and all. And now, he is looking to help other cyborgs like himself gain more rights, mainly because of the difficulties such people have been facing in recent years.

Consider the case of Steve Mann, the man recognized as the “father of wearable computers”. Since the 1970’s, he has been working towards the creation of fully-portable, ergonomic computers that people can carry with them wherever they go. The result of this was the EyeTap, a wearable computer he invented in 1998 and then had grafted to his head. 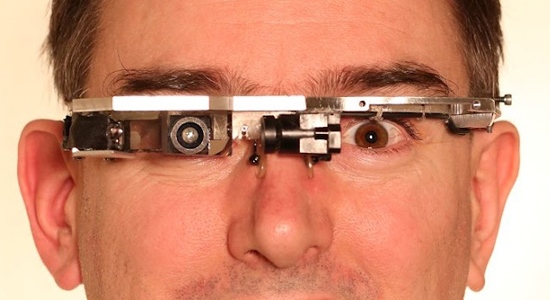 And then in July of 2012, he was ejected from a McDonald’s in Paris after several staff members tried to forcibly remove the wearable device. And then in April of 2013, a bar in Seattle banned patrons from using Google Glass, declaring that “ass-kickings will be encouraged for violators.” Other businesses across the world have followed, fearing that people wearing these devices may be taking photos or video and posting it to the internet.

Essentially, Harbisson believes that recent technological advances mean there will be a rapid growth in the number of people with cybernetic implants in the near future, implants that can will either assist them or give them enhanced abilities. As he put it in a recent interview:

Our instincts and our bodies will change. When you incorporate technology into the body, the body will need to change to accommodate; it modifies and adapts to new inputs. How we adapt to this change will be very interesting.

Other human cyborgs include Stelarc, a performance artist who has implanted a hearing ear on his forearm; Kevin Warwick, the “world’s first human cyborg” who has an RFID chip embedded beneath his skin, allowing him to control devices such as lights, doors and heaters; and “DIY cyborg” Tim Cannon, who has a self-administered body-monitoring device in his arm.

And though they are still in the minority, the number of people who live with integrated electronic or bionic devices is growing. In order to ensure that the transition Harbisson foresees is accomplished as painlessly as possible, he created the Cyborg Foundation in 2010. According to their website, the organization’s mission statement is to:

help humans become cyborgs, to promote the use of cybernetics as part of the human body and to defend cyborg rights [whilst] encouraging people to create their own sensory extensions.

And as mind-controlled prosthetics, implants, and other devices meant to augment a person’s senses, faculties, and ambulatory ability are introduced, we can expect people to begin to actively integrate them into their bodies. Beyond correcting for injuries or disabilities, the increasing availability of such technology is also likely to draw people looking to enhance their natural abilities.

In short, the future is likely to be a place in which cyborgs are a common features of our society. The size and shape of that society is difficult to predict, but given that its existence is all but certain, we as individuals need to be able to address it. Not only is it an issue of tolerance, there’s also the need for informed decision-making when it comes whether or not individuals need to make cybernetic enhancements a part of their lives.

Basically, there are some tough issues that need to be considered as we make our way into the future. And having a forum where they can be discussed in a civilized fashion may be the only recourse to a world permeated by prejudice and intolerance on the one hand, and runaway augmentation on the other.

In the meantime, it might not be too soon to look into introducing some regulations, just to make sure we don’t have any yahoos turning themselves into killer cyborgs in the near future! *PS: Bonus points for anyone who can identify which movie the photo above is taken from…

One thought on “The First Government-Recognized Cyborg”