It’s been an eventful year for NASA, thanks to the ongoing efforts of its many space probes and landers. In addition to some breathtaking discoveries made on Mars (proof of the existence of water and an atmosphere in the past), the MESSENGER probe discovered ice around the poles of Mercury, captured impressive footage of the surface, and mapped out the planet for the first time.

And while all this was happening in the Inner Solar System, the Cassini space probe was doing some rather impressive things in the Outer Solar System. In addition to taking part in the “Smile at Saturn” event, surveying the Jovian satellite of Europa, and unlocking the strange secrets of Saturn’s moons, Cassini also provided the most detailed map yet of the Saturnalian giant known as Titan.

And now, using the data provided by NASA’s spacecraft, scientists have created this beautiful mosaic mapping the northern hemisphere of Titan, which is full of rivers, lakes, and seas. Ever since Cassini started mapping the world in 2004, it has been known that Titan boasts natural bodies of water that are composed not of water, but liquid hydrocarbons.

However, Cassini’s scans missed the true extent of some seas, including the biggest one of all: Kraken Mare. This new map fills in almost all the area of Titan’s north pole and provides scientists with important answers to some of their questions. These include how the geographic distribution of these natural bodies of water came to be.

For instance, while the northern hemisphere is dotted all over with hundreds of tiny lakes, the large seas seem confined to a specific area (see the lower right side of the image above). As geophysicist Randolph Kirk of the U.S. Geological Survey pointed out during a press conference at the American Geophysical Union conference, geological forces are most likely at work here.

Basically, the team thinks that Titan’s crust has fractured here when active tectonics created almost straight lines of parallel mountain chains. The low-lying areas are what gets filled with liquid, creating Kraken Mare and its smaller neighbor, Ligeia Mare. The scientists think the process may be analogous to the flooding which created large bodies of water in Nevada some 12,000 years ago. 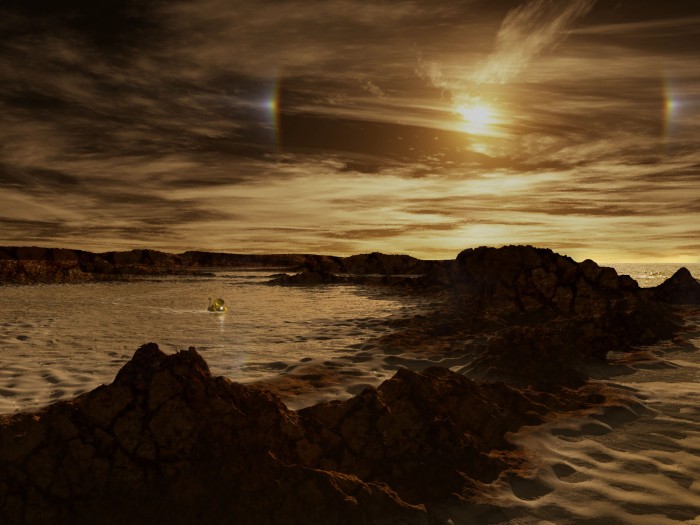 Other tectonic processes are probably behind the smaller dotted lakes too, though scientists don’t yet know precisely what. Some of the lakes could be the infilled calderas of former active volcanoes, which would spew molten water instead of lava. But there isn’t enough volcanic activity on the moon to account for all of them.

Instead, many were probably created when liquid hydrocarbons dissolved the frozen ice, in the same way that water on Earth dissolves limestone to create features like the Bottomless Lakes in New Mexico. According to Kirk, “this creates a kind of exciting prospect that under the northern pole of Titan is a network of caves.” Such caves on Earth are often filled with all manner of life, so these ones could be as well.

Other radar data has shown the depth and volume of Ligeia Mare, the second largest sea in the northern hemisphere. According to NASA scientists, the sea has a maximum depth of about 170 meters, as deep as Lake Michigan, and about twice its volume. Alas, beyond the comparative size of these bodies of water, Titan’s liquid bodies could not be more different than those on Earth.

As already noted, Titan’s lakes, rivers and seas are composed of liquid hydrocarbons, most likely ethane and methane. Ordinarily, these exist in gaseous form. But given Titan’s surface conditions, where the average temperatures is -180 degrees Celsius (-292 Fahrenheit), these hydrocarbons are able to exist in liquid form.

Nevertheless, finding evidence of such chemicals on planets beyond Earth is a rare and impressive find. Combined with the discovery of propelyne in Titan’s atmosphere – an organic compound that is a byproduct of oil refining, fossil fuel extraction, and thought not to exist beyond Earth – this moon is proving to be full of surprises!

And be sure to enjoy this video which simulates a flyover of Titan, as complied by NASA from the data provided by the Cassini space probe:

2 thoughts on “News from Space: Titan’s Seas Mapped in Detail”