Yesterday, an asteroid estimated to be the size of three football fields passed Earth by. Traveling at 43,000 kilometers per hour and passing at a distance of 8.8 lunar distances of Earth, the asteroid showed up just one year after a similar asteroid exploded over Russia and injured 1,200 people. The only problem was, the good people of Earth missed the show!

Slooh, an online “community observatory” that streams images from ground-based telescopes online during celestial events, was supposed to broadcast the approach of the asteroid as it raced past the planet, starting at 9 p.m. ET (2 a.m. MT).  Unfortunately, Slooh’s flagship observatory on Mount Teide in Spain’s Canary Islands was iced over and unable to catch the asteroid – named 2000 EM26 – as it passed us by.

Paul Cox, Slooh’s technical and research director, said that the asteroid should be somewhere in the visible star field. And rather than accept failure at retracing its path, he and the other folks at Slooh are calling upon amateur astronomers to conduct a photographic search for it in the next few nights. Finding it is not just a matter of honor, but of determining how much the space rock has shifted over time. 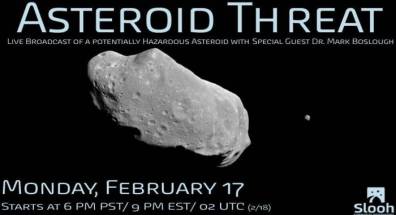 Since the asteroid was last observed 14 years ago for only 9 days, it isn’t too surprising that uncertainties in its position could add up over time, shifting its position and path to a different part of the sky by now. As Cox pointed out:

Discovering these Near Earth Objects isn’t enough. As we’ve seen with 2000 EM26, all the effort that went into its discovery is worthless unless follow­up observations are made to accurately determine their orbits for the future.  And that’s exactly what Slooh members are doing, using the robotic telescopes at our world­-class observatory site to accurately measure the precise positions of these asteroids and comets.

Naturally, there were some who worried that this elusive rock might threaten Earth, given its proximity to our own orbit and the fact that it’s path may have changed. But there is no reason to fear, as these changes are not likely to bring it into our path and it won’t be returning anytime soon. And before it does, we ought to have eyes on it again and be able to accurately chart its course. 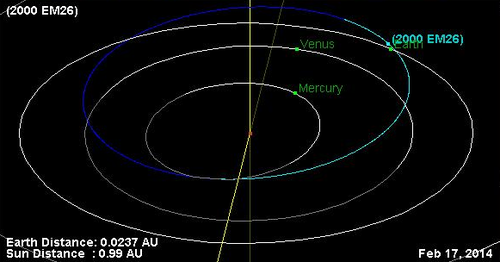 And above all, similar sized asteroids, including ones passing even closer to Earth, zip by every month. 2000 EM26 received a lot of coverage yesterday in part because it arrived close to the anniversary of the Chelyabinsk meteorite fall over Russia. And though it remains hidden for now, eyes are on the sky to find the asteroid again and refine its orbit.

Hopefully the beast won’t get away next time!

One thought on “News From Space: Asteroid Misses Earth (Again!)”