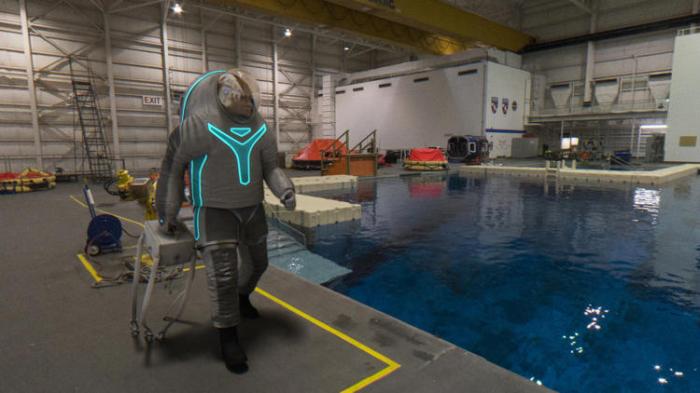 It’s no secret that the human race is poised on a new generation of space exploration and travel. With future missions based on towing asteroids to Earth, building settlements on the Moon, and walking on Mars, NASA and other space agencies are eying their aging hardware and looking for design modifications. From shuttles, to rockets, to capsules, everything is getting an overhaul. And now, NASA is looking to create the next generation of space suits, and is looking to the public’s for help.

They are called the Z-series, a revolutionary new suit that is designed for walking on Mars as well as floating around in space and performing spacewalks. This new series is expected to replace the current aging design, which has been in continuous use on both space flights and aboard the International Space Station since 1982. In addition to updated technology and functionality, the new spacesuit also has an updated look.

The first design was unveiled back in December of 2012 with the Z-1, which bore a striking resemblance to Buzz Lightyear’s own spacesuit. The new version (the Z-2 series), which has different joint designs and a more durable torso, also comes with a trio of “flashy” cover designs that were made in collaboration with fashion students at Philadelphia University, and were inspired by biomimicry, the evolution of technology, and even – supposedly – street fashion.

And unlike the current microgravity suits, the Z-series is designed for walking in extra-terrestrial environments where gravity is the norm (i.e. the Moon and Mars). Intrinsic to the new design is flexibility: it makes it much easier to walk, bend, and pick things up off the surface of a planet or moon. It also goes on quite differently. Whereas the old suit is pulled on like a pair of pants and a shirt, the new version has a handy door built into the back so someone can climb inside.

As Bobby Jones, an engineer for ILC, the company that worked on the new design explained:

There are a lot of fundamental design differences between developing a microgravity suit versus a planetary walking suit. A lot of that has to do with how much mobility is built into the lower torso. With microgravity you’re using your arms to move around and your feet just hang out there. You can dock the suit up to your habitat or vehicle and leave it outside, so you don’t drag dust and other things into your cabin,” Jones explains.

As previously noted, anyone can help decide among the three cover designs by casting a vote on NASA’s website. One option, inspired by underwater creatures (and known as the “Biomimicry” suit), employs glowing wires to help the suit stay visible at night. A second version – known as the “Technology” suit – pays homage to past spacesuits and uses light-emitting patches along with wire. The third option, inspired by “Trends in Society”, uses electroluminescent wire and a bright color scheme to mimic the appearance of sportswear and the emerging world of wearable technologies.

NASA says the final design is “reflective of what everyday clothes may look like in the not too distant future,” pulling in elements of sportswear and wearable tech. NASA will move forward with the most popular cover in the public vote, and plans to have the suit ready for testing by the end of the year. And they are hardly alone in looking to create suits that can handle the challenges of future exploration. For example, it’s also worth checking out this MIT professor Dava Newman sleek Mars spacesuit, aka. the “Spiderman Spacesuit”, that is currently in development.

In the meantime, check out this video from Ted Talks where Newman showcases her Spiderman suit. And be sure to head over to the Johnson Space Center’s website and cast your vote for what NASA’s next-generation spacesuit will look like.