This first example shows us that thought they were obsessed with simple geometric shapes, the Borg were capable of thinking outside of the cube. If anything, the sphere is a more perfect shape and aesthetically way more pleasing, so its a wonder why they didn’t do it sooner.

Making its first appearance in Star Trek: First Contact, the sphere appeared to be an auxiliary craft which was housed inside a Borg Cube. But in truth, these vessels were actually much more versatile, acting as scout ships and tactical vessels, doing deep-space reconnaissance or performing light assault missions.

In the spinoff series Voyager, Borg Spheres make several appearances. The most notable of which was the series finale (episode 168: “Endgame”), where Voyager was pursued and overtaken by one and had to destroy it from the inside to escape. This, in addition to scenes from other episodes, indicated that every sphere has an internal compartment capable of housing a sizable starship.

Measuring 600 meters in diameter, a standard Borg Sphere carries a crew of 11,000 drones, is protected by regenerative shields, ablative armor, and has the usual array of Borg weapons (which include tractor beams and disruptors). It is capable of warp speed, transwarp speed, and in some cases, can even generate a temporal vortex to achieve time travel (as was demonstrated in First Contact). 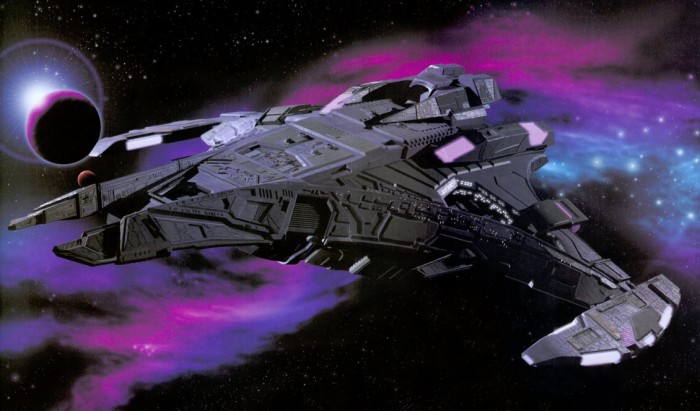 You know, I was never was much of a Trekkie. Compared to other franchises, I never really did get into the shows that much. That is, until DS9 introduced the whole Dominion plot line, then I got into it with both feet! Space battles, explosions, ships blowing each other up… what’s not to like? And to make these battles happen, the show’s conceptual artist had to come up with some new designs.

One such design was the Jem’Hadar Battleship, which made its debut in season 6 (episode 144, “Valiant”). Introduced midway through the war, this new breed of warship was designed for the sole purpose of breaking the stalemate between the Dominion and the Allies. That and inspiring fear!

At twice the size of a Galaxy-class vessel (USS Enterprise D) and boasting over 40 torpedo launchers, this ship was clearly meant to be so large and so powerful that no Federation or allied ship would have a hope of stopping it. However, its size and speed also made it a relatively easy target for multiple enemy ships, which would have no trouble hitting it and could outmaneuver it in battle.

After it’s initial deployment, where it destroyed the USS Valiant, several battleships were rolled off the line and took part in the war, especially during the latter engagements of the war like the Battle of Cardassia. Many ships were needed to break the lines which they reinforced, and it was only by the timely defection of Cardassian forces that the Dominion was overwhelmed in these battles.

To the Halo universe once more, this time for a look at a modified colony ship known as the Spirit of Fire! Making its appearance in Halo Wars, this ship was the largest in the UNSC navy and served with distinction during the Covenant War.

As already noted, the Spirit of Fire was originally a Pheonix-class colony ship, a vessel that was designed to carry colonists and supplies to new worlds as part of the UNSC’s prewar expansion efforts. However, this changed with the appearance of the Covenant and their apparent need to knock over human settlements.

Recommissioned for military service by the UNSC, the Fire was outfitted with a magnetic accelerator cannon, point defense guns and missile turrets, hull armor, and a major engine overhaul. Its internal bays were also converted to carry Scorpion tanks, Warthogs, Pelicans, fighters, bombers, and anything else it would need to put a small army onto a planet. As a former colony ship, the Fire retained the ability to enter atmosphere and land planetside, making it all the more effective at troop deployment.

During the course of the war, the ship was declared missing and all hands were presumed dead after it failed to return from a mission. However, the ship was actually traveling back at sublight speed from an engagement after it lost its fusion core. The crew had used this to destroy a Forerunner “Shield Planet” which happened to be housing a large Covenant attack fleet. In sacrificing its engine core, it prevented a major strike by Covenant forces on human territories, and therefore saved countless lives. Not bad for a civilian ship, eh? 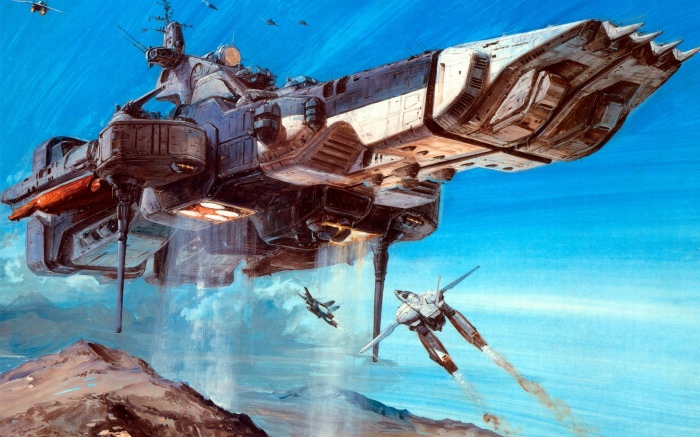 When you hear the words, Super Dimension Fortress, what comes to mind? Definitely not a piddly little spaceship! Which is probably why the Macross’ full name contains them! Apparently, this ship was rebuilt from the remains of an alien craft that crash-landed on Earth, and was intended for use should said aliens ever come knocking again.

Although intended to travel to distant solar systems and promote peace with alien species, the Macross became the first line of defense once war with the Zentradi species began. Much like all the “mechas” from this franchise, this ship is capable of changing from its ship designation into a towering mech (known as “Storm Attacker” mode), a process which takes about 15 minutes.

The massive ship also carries the two carriers – the CVS-101 Prometheus and SLV-111 Daedalus – within it’s fuselage. When in cruiser mode, these are housed along the sides, but while in “Storm Attacker” mode, they constitute the robots “arms”. In terms of weapons, this baby comes equipped with 8 guided converging beam cannons, four 178cm rail cannons, automatic missile launchers, and a main super-dimension-energy cannon. Aliens beware! 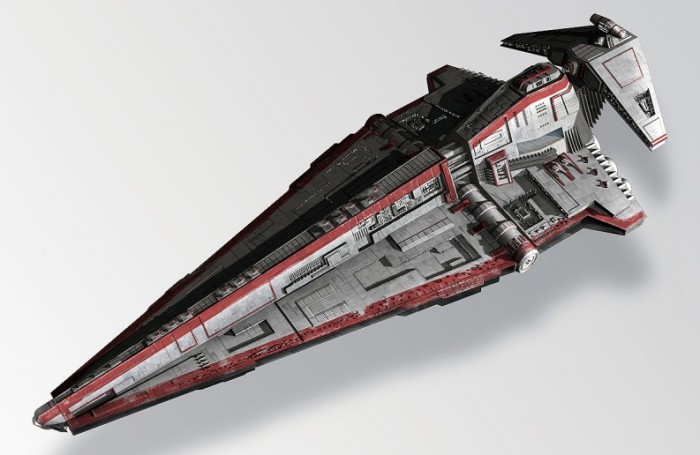 It’s funny how the Rebels only seemed to get into mega-ships after the Empire was thoroughly licked. And yet, here we have another Star Defender ship which comes from the expanded Star Wars universe and only showed up for duty after the Empire lost all its big behemoths.

Produced by the Corellian Engineering Corporation (natch!), the Strident-class was the first breed of Super Star Destroyer to serve on the side of the Alliance (which now called itself the New Republic). But of course the Alliance didn’t like the term “destroyer” when applied to their mega ships, hence the name change. But the particulars are pretty much the same.

Much like the Viscount-class produced by the Mon Calamari, the Strident comes equipped with thousands of turbolasters, laser cannons, and ion guns, and its massive hold houses dozens of squadrons of starfighters as well as hundreds of shuttles and support ships. It took awhile but I’m guessing the Rebels finally decided to go big or go home! 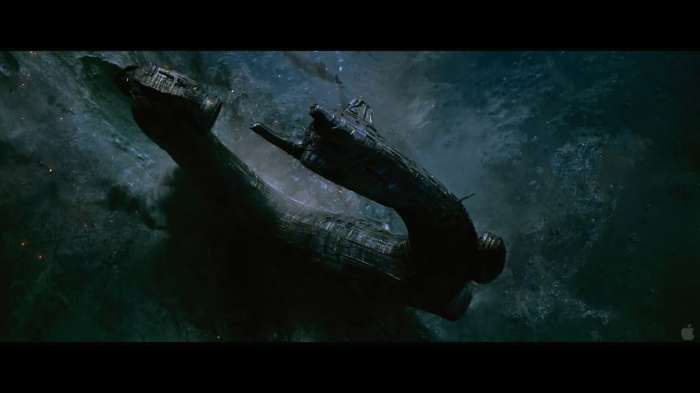 I can’t wait to learn more about THIS one! As the focal point for the first Act of Alien, the “Spacejockey” ship is also central to the plot of its soon-to-be-released prequel, Prometheus. Known also as “The Derelict”, very little is known about this ship other than the fact that it was of unknown origin and appeared to be transporting xenomorphs.

The Derelict was first discovered by the crew of the Nostromo when their ship was rerouted to LV-426 to investigate a distress beacon. When they approached the ship, its alien configuration was immediately clear. Shaped in the configuration of a horseshoe, the ship apparently had two prongs, one longer than the other, and an engine array located at the rear. 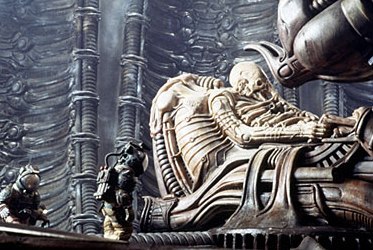 When investigating the inside of the ship, its alien nature became even more apparent. Whoever the Space Jockeys were, they clearly shared H.P. Lovecraft’s sense of aesthetics! Literally everything aboard looked organic and gothic, right down to the funky patterns on the walls! When discovering what appeared to be a control chair, the crew stumbled onto the remains of a long “Space Jockey” as well. Having an anthropomorphic shape and a trunked face, they are assumed to look like a cross between a human and an elephant.

Closer examination of the remains revealed that it died from a “chestbuster” breaking through its ribcage. With the discovery of the ship’s compliment of eggs, and the observable symbiosis between the “facehuggers” and “chestbusters”, it was unclear why the Spacejockeys were transporting them. Perhaps they came aboard by accident, perhaps they were intended for another use somewhere. These are all questions I look forward to being answered… say June-ish!

Seems the Klingons are getting a lot of attention from me as of late. But I’ve come to acknowledge just how many cool ships they really do have. Clearly, these blood-drinking, Valhalla worshipping guys excel when it comes to bringing beauty to their instruments of death. But then again, one would have to assume that it’s one of the few artistic outlets they get to have!

Taken from the TNG universe, the Vor’cha was the mainstay of the Klingon armada and the replacement for the aging K’t’inga-class. The first of its design served as the flagship for the Empire, but became fully integrated into the armada once it was mass-produced and replaced by the larger Negh’var-class.

Making its first appearance in season 4 of Star Trek: TNG (episode 80: “Reunion”) where it served as the Chancellor’s flagship, this vessel would go on to make several subsequent appearances in the expanded franchise. It’s most notable appearances were during the Klingon-Cardassian War where several participated in the assault on DS9 itself. Later, during the Dominion War, many more would serve on the front lines against the Jem’Hadar and their allies.

Naturally, this Klingon ship boasted multiple disruptor arrays, the main one located at the front end of the ship with two more mounted on the wings beside the nacelles. These were capable of firing in either the solid mode (like a phaser) or intermittently. Maneuverable for a ship of its size, it also came equipped with a cloaking device which was available in all flight modes. 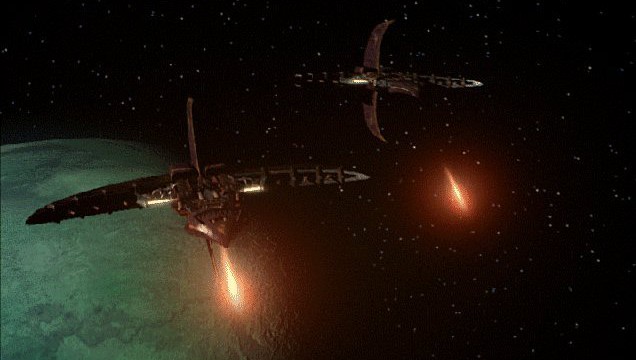 This ship gets seen a lot around the B5 universe. And since I can’t stop hitting them up for cool ships, it only makes sense to mention this baby here. The Vorchan-class cruiser, a medium warship, was the mainstay of the Centauri fleet and weapon of choice when it came to raids, reconnaissance and even large-scale offensive operations.

Though designed predominantly to escort heavier cruisers, such as the Primus-class warship, Vorchans were still highly effective in small squadrons and were often called upon to mount attack missions by themselves. During the Narn-Centauri War, Vorchan warships carried out many assaults on Narn colonies and installations and even participated in skirmishes with the heavier Narn warships.

Its armaments consist of two plasma accelerators, missile banks and guided mines. These armaments, paired with its size, speed and relative maneuverability allow it to stand toe-to-toe with just about anything the Narns, Earth or League of Non-Aligned Worlds could throw at it. And unlike the heavier Primus ships, it is capable of maneuvering inside atmospheres. And it’s cool, raptor-winged like design makes it pretty easy on the eyes too. Were it not for the fact that Roddenberry beat them to it, you can bet the B5 designers would have named this ship a Bird of Prey!

Nine down, who the hell knows how many more to go!