More of Season Four of GOT – or three-point-five, as I like to think of it. This week, we had more development and more buildup to what is to be the season’s climax. And judging from all the tidbits ventured this week and in previous episodes, this will all come down to an assault on the Wall involving Mance Rayder at one end and Ygritte and Tormund at the other, and Tyrion’s fate being decided in a trial by combat. Those are the main big ticket items are they are set to be exploding in the coming two weeks!

As for the lesser plot points, Arya is either going to make it to the Eyrie with the Hound or strike out and finding her own path. Sansa is going to be stuck with and hit upon by her creepy-uncle figure Petyr and try not to vomit. Brienne is either going to find her and her sister or get lost in the woods with Podrick (and maybe find out what the whores in King’s Landing already know!), and… something involving Daenerys and Stannis. Not a lot of promise there yet, but whatever…

The episode opens in King’s Landing, where Tyrion and Jaime discuss his demand for a trial by combat. Jaime tells him he cannot fight for him since the loss of his hand, and Tyrion asks that he find Bronn for him. Jaime then lets Tyrion know that Cersei plans to call on Ser Gregor Clegane – aka. the Mountain – to be her champion. We then see him in a yard slicing through prisoners before Cersei comes to his side and thanks him for answering her call.

Bronn comes to Tyrion and tells him that he’s now married, and that Cersei arranged it. He declines the offer to be Tyrion’s champion since the odds of winning are slim, and because Tyrion can offer him little. Prince Oberyn arrives later, telling Tyrion of how he was at Casterly Rock after Tyrion had been born and how Cersei had been horribly cruel to him even then. He then tells him that he intends to seek justice for his family, and that he will be Tyrion’s champion so he can kill the man who murdered his sister and her children.

Farther north, Arya and Sandor Clegan come upon another burnt out hut and a dying villager. After telling them of his woe, Sandor stabs him in the heart to end his pain. Two men then jump him, one biting Clegane’s shoulder before he manages to snap the man’s neck. We then see that it was Biter and Rorge, two of the prisoners Yoren was taking to the Wall before. Arya recognized Rorge and remembers how he threatened to rape her. After learning his name, she stabs him through the heart, and Sandor congratulates her for learning.

At the Wall, Jon Snow returns from his mission to Craster’s Keep to kill the muntineers. A council is held to discuss what to do about the impending Wildling attack, and Jon Snow advices that they block the gates with rocks and ice. He is overruled by Bowen Marsh and Janos Slynt, both of whom mistrust Jon due to his time amongst the Wildlings. To add insult to injury, he and Sam are given the night’s watch until the next full moon. 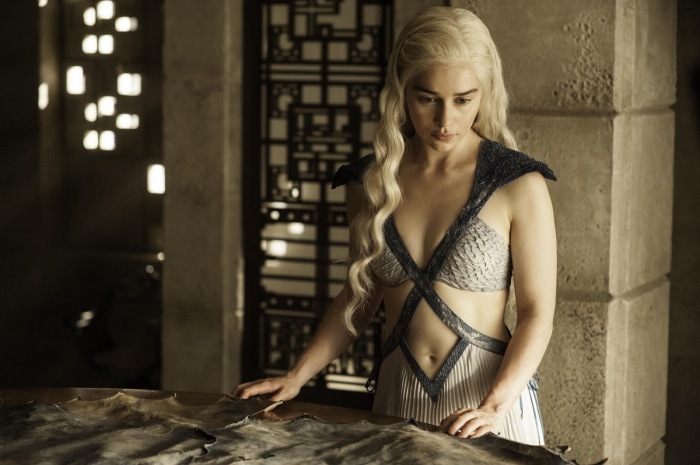 In Mereen, Daenerys finds Daario in her chamber offering himself to her, which she accepts. In the morning, Mormont comes around and learns of what has happened. He counsels Daenerys not to trust him, but she replies that she doesn’t, which is why she has sent him to liberate Yunkai and kill all the masters. Mormont cautions her that her actions will only lead to more suffering, and advising mercy. As a compromises, she decides to send Hizdar zo Loraq with Daario to caution the masters into obedience.

In the Riverlands, Brienne and Podrick set down at an inn for the night and enjoy some kidney pies – which, as it turns out, which cooked by Hot Pie. They meet him while taking their meal, he sits down to chat. She lets him know they are looking for Sansa Stark, and that they intend to bring her home. He confides that he knew Arya, and that she was in the company of the Brotherhood Without Banners, and that the Hound was with them too. From this, Pod suggests that Arya would likely be heading to the Eyrie, and that Sansa may be there as well.

In the Eyrie, Robin finds Sansa in the courtyard playing in the snow. She has built a snow castle of Winterfell, which Robin accidentally damages. This prompts an argument, Robin throws a tantrum and kicks down the castle, and Sansa slaps him. He runs off, and Petyr comes in and tells her not to worry. She asks him why he really killed Joffrey, and he confesses he did it to avenge her mother because he loved her. He then kisses her, which her aunt sees.

Afterward, Lysa summons her to the throne room and asks her to stand beside her at the Moon Door. She accuses her of kissing Petyr, flies into a jealous rage and threatens to throw Sansa out. Petyr then enters and calms her down by promising to send Sansa away. She lets Sansa goes and begins to cry. Petyr them takes her in his arms and says he’s only ever loved one woman, her sister, and then shoved her out the Moon Door.

Summary:
Overall, not a bad episode! And a nice surprise after last week’s bomb-fest. There were the bits and pieces I was expecting and looked forward to – including Oberyn becoming Tyrion’s champion, the presentation of the new Mountain (once again recast, and played this time by Hafþór Júlíus Björnsson), and Petry shoving Lysa out the Moon Door. Other than that, not much happened, but not much was meant to. There’s plenty going on before the season finale, and this episode needed to set much of that up.

That being said, there were some bits that seemed kind of dumb. As usual, this had to do with the ongoing storyline in Dragonstone, where they usually cut to whenever they need some pacing. The only difference was, this time around they at least hinted at something significant, which appears to be that Melissandre wants Selyse (Stannis’ wife) to sacrifice her daughter to the Red God. And while I can’t complain about seeing Melissandre naked, it was admittedly unnecessary – much like Daario dropping his pants!

Speaking of which, Daenerys’ parts were once again filler. First, we have her bedding Daario (which is something that doesn’t happen until book V) and then sending him off to recapture Yunkia (something that didn’t happen in the books at all). I tell ya, they are just trying to keep her storyline going since they did a rush job on all those sieges! A Storm of Swords, which this season and last are based on, ended with her seizing Mereen. But with that done, they now have nothing for her to do but deal with the travails and travesties of ruling. BORING!

But other than that, things were pretty good. I really do enjoy what they are doing with Oberyn, who is being very well played by Pedro Pascal. When it was initially announced that he would be playing the role, some fans were critical since they didn’t think he looked the part. In fact, the word “whitewashing” was used. However, I think he’s done a magnificent job in the role. And Kate Dickie really killed it as the irrational and insanely jealous Lysa Arryn. Too bad Petyr killed her 😉

And let me take this moment to say that I am glad they’ve recast a few roles. Daario Naharis, as played by Ed Skrein last season, didn’t look a DAMN THING like he is described in the books. Michiel Huisman, who plays him this season, might not fit the role to a t, but he’s way closer than that braided-haired, beardless pretty boy. And after replacing Conan Stevens in season one with Ian Whyte in seasons two, I’m glad they have an actor again who captures The Mountain’s true appearance and nature.

So now, things are all set for next week’s showstopper – the fight between Prince Oberyn and Ser Gregor Clegane. It is appropriately titled “The Mountain and the Viper”. And no spoilers, but it’s gonna be epic and very… George RR Martinesque!