In this episode, I discuss one of the most well-known concepts in the Search For Extraterrestrial Intelligence – the Kardashev Scale. Named for famed Soviet-Russian astrophysicist Nikolai Kardashev, who died in 2019, this three-level classification system was introduced in his seminal study, “Transmission of Information by Extraterrestrial Civilizations,” published in 1964. The Scale characterizes extraterrestrial civilizations based on the amount of energy they can harness, ranging from the energy of an entire planet to a star system or a galaxy.

In the almost sixty years since it was first proposed, many additions, variations, and articulations have been added to the Scale. Combined with related ideas, like Dyson Structures (or “Megastructures), the Scale has had significant implications for the Search for Extra-Terrestrial Intelligence (SETI) and is considered foundational to the field of study.

A few months ago, my boss at Universe Today encouraged me to take on a new writing project. For months now, I’ve been writing a series about the Fermi Paradox. For those who are not familiar, this paradox takes its name from Enrico Fermi, the Italian-American physicist who was instrumental in the development of the atomic bomb and the first nuclear reactor.

END_OF_DOCUMENT_TOKEN_TO_BE_REPLACED

Good day, all! Today, I wanted to share some thoughts on a subject that is not only a staple of science fiction but is also in danger of becoming a reality! I am talking, of course, of killer robots! Machines that are capable of fighting, killing, thinking for themselves, and maybe even reproducing!

As concepts go, it’s a pretty time-honored and thoroughly explored one. But as with most tropes and/or things that we might consider to be cliche, there’s a reason for it. The idea that the very machines we create to make our lives easier will someday turn on us, that’s more than just your garden-variety technophobia and sci-fi pulp.

END_OF_DOCUMENT_TOKEN_TO_BE_REPLACED

Hello fellow readers and purveyors of all things nerdy and cool! Today, I wanted to talk about my next literary moves once the trilogy I am currently working on is finished. There are a few ideas I have in mind, but right now, my main focus is on a standalone novel that will serve as a transition between the current trilogy and the one I hope to write next.

This story will take place inside a generation ship that is making its way towards a neighboring star system. Within the confines of this self-contained world, thousands of humans have committed to waiting and working for generations as their massive ship – the Traverse Velocity, which in astronomical terms refers to the speed at which a star moves perpendicular to our line of sight – transports them to an Earth-like world outside of our Solar System.

END_OF_DOCUMENT_TOKEN_TO_BE_REPLACED

Good morning, or whatever time it happens to be where you live. In fact, it you’re living south of the equator in Australia or New Zealand, I hope tomorrow is treating you well! Anyway, today I thought I’d address a topic that has become very near and dear to my heart. And the reason is because in the near-future, I want to tackle this challenging topic soon.

END_OF_DOCUMENT_TOKEN_TO_BE_REPLACED

So this past week, I managed to get a bit of a celebrity encounter. Elon Musk, the founder of SpacX, Tesla, the Boring Company, Solar City, commented on an article I wrote. The article itself (“New Model Predicts That We’re Probably the Only Advanced Civilization in the Observable Universe“) was about a recent study that took a fresh look at the Fermi Paradox.

This is why we must preserve the light of consciousness by becoming a spacefaring civilization & extending life to other planets https://t.co/UDDP8I1zsS

Based on the range of uncertainties that are inherent in the calculations of the Drake Equation, they claimed, it is quite likely that humanity is alone in the observable Universe. Hence why we have failed to find evidence of extra-terrestrial intelligence (ETI) yet. In response, Musk posted that this conclusion made it all the more important for humanity to explore and colonize the known universe.

WELL! As you can imagine, everything that Musk says and does becomes news. Shortly after he posted his responses to this article, a number of news sources picked up the story and ran with it. The first that came to my attention (thanks for my friend and colleague Paco) was Business Insider, which quoted Musk and mentioned the original study. I immediately told my boss, who said that countless media outlets were reporting on this. He started sending me thinks. They included…

I’m sure there are others, but I got tired of my boss posting links and I felt he had made his point. And while NONE of the publications happened to mention then original article, Universe Today, or the author (i.e. ME!), they did draw attention to the original research and the questions it raised. As for the rest, they focused strictly on Musk himself. Damn famous people, getting all the attention!

Needless to say, I wrote to Musk on Twitter and thanked him for taking an interest. He didn’t respond, but that was to be expected to. He’s a busy man and thousands of people were posting about the article. In the end, its okay to catch a ray of sunshine as it shines on someone else! 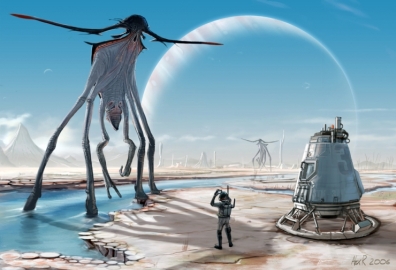 “We are going to find life in space in this century.” This was the bold prediction made by Dr. Seth Shostak, Senior Astronomer at the Search for Extra-Terrestrial Intelligence Institute (SETI) at this year’s European Commission Innovation Convention. As part of the European Union’s strategy to create an innovation-friendly environment, the ECIC brings together the best scientific minds from around the world to discuss what the future holds and how we can make it happen.

And this year, Dr. Shostak and other representatives from SETI were quite emphatic about what they saw as humanity’s greatest discovery, and when it would be taking place. Sometime this century, they claim, the people of Earth will finally find the answer to the question “Are we alone in the universe?” Like many eminent scientists from around the world, Dr. Shostak believes its not a question of if, but when. 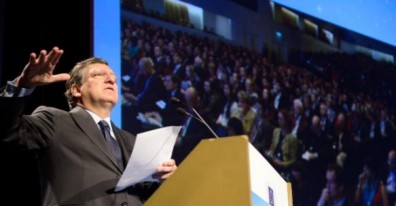 As he went on to explain, given the sheer size of the universe and the statistical probabilities, the odds that humanity is far more unlikely than the reverse:

There are 150 billion galaxies other than our own, each with a few tens of billions of earth-like planets. If this is the only place in the universe where anything interesting happening then this is a miracle. And 500 years of astronomy has taught us that whenever you believe in a miracle, you’re probably wrong.

As for how we’ll find that life, Dr Shostak sees it as a ‘three-horse race’ which will probably be won over the next 25 years. Either we will find it nearby, in microbial form, on Mars or one of the moons of Jupiter; or we’ll find evidence for gases produced by living processes (for example photosynthesis) in the atmospheres of planets around other stars; or Dr Shostak and his team at SETI will pick up signals from intelligent life via huge antennas. 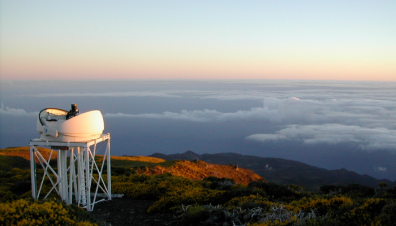 Dr. Suzanne Aigrain – a lecturer in Astrophysics at Oxford University and who studies exoplanets – represents horse number two in the race. Dr. Aigrain and her research group have been using electromagnetic radiation (i.e. light) as their primary tool to look for planets around other stars. The life ‘biomarkers’ that she and her colleagues look for are trace gases in the atmospheres of the exoplanets that they think can only be there if they are being produced by a biological source like photosynthesis.

Speaking at the Convention, Dr Aigrain noted that, based on her studies, she would also bet that we are not alone:

We are very close to being able to say with a good degree of certainty that planets like the Earth, what we call habitable planets, are quite common [in the universe] … That’s why when asked if I believe there’s life on other planets, I raise my hand and I do so as a scientist because the balance of probability is overwhelmingly high.

Dr. Shostak and SETI, meanwhile, seek evidence of life in the universe by looking for some signature of its technology. If his team does discover radio transmissions from space, Dr. Shostak is quite certain that they will be coming from a civilization more advanced than our own. This is part and parcel of searching for life that is capable of sending out transmissions, and assures that they will have a level of technology that is at least comparable to our own.

At the same time, it is entirely possible that an advanced species will have existed longer than our own. As the Kardashev Scale shows, the level of a race’s technical development can be measured in terms of the energy they utilize. Beginning with Type 0’s, which draw their energy, information, raw-materials from crude organic-based sources, the scale goes on to include levels of development that draw energy of fusion and anti-matter to our host star, or even stellar clusters and even galaxies.

Considering that size of the universe, the realm of possibility – and the fact humanity itself is still making the transitions from Type 0 to Type I – the odds of us meeting an extra-terrestrial that is more advanced than us are quite good. As Shostak put it:

Why do I insist that if we find ET, he/she/it will be more advanced than we are? The answer is that you’re not going to hear the Neanderthals. The Neanderthal Klingons are not building radio transmitters that will allow you to get in touch.

“Neanderthal Klingons”… now that’s something I’d like to see! Of course, scientists have there reasons for making such bold predictions, namely that they have a vested interest in seeing their theories proven correct. But not surprisingly, they are hardly alone in holding up the numbers and insisting that its a numbers game, and that the numbers are stacked. Another such person is William Shatner, who in a recent interview with the Daily Mail offered his thoughts on the possibility of alien life.

As he explained it, it all comes down to numbers, and the sheer amount of discoveries made in such a short space of time:

He was a bit off on the number of planets, but he does have a point. Earlier this month, NASA announced the discovery of 715 new exoplanets thanks to a new statistical technique known as “verification by multiplicity”. By observing hundreds of stars and applying this basic technique, the Kepler space probe was able to discover more planets so far this year than in the past few combined. In fact, this one batch of discovered increased the total number of exoplanet candidates from 1000 to over 1700.

And while the discovery of only four potentially habitable planets amongst those 715 (a mere 0.0056% of the total) may seem discouraging, each new discovery potentially represents hundreds more. And given how little of our galaxy we have mapped so far, and the fact that we’ve really only begun to explore deep space, we can expect that list to grow by leaps and bounds in the coming years and decades.

Naturally, there are some fundamental questions that arise out of these predictions. For example, if we do find life on other planets or intercept a radio signal, what are the consequences? Finding a microbe that isn’t an earthly microbe will tell us a lot about biology, but there will also be huge philosophical consequences. Even more so if we are to meet a species that has developed advanced technology, space flight, and the means to come find us, rather than us finding them.

In Dr Shostak’s words, ‘It literally changes everything’. But that is the nature of