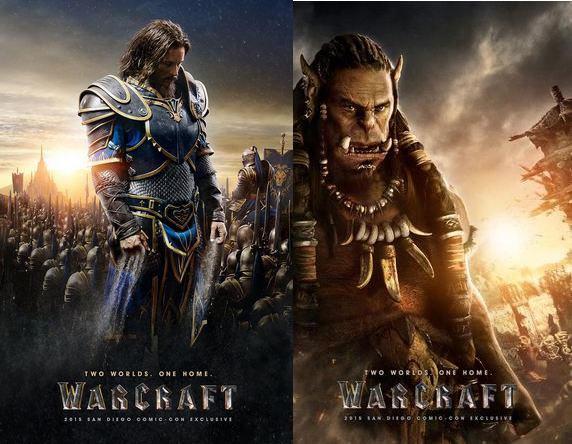 I suppose it was inevitable. Given the popularity of the franchise and the massive hit that was the MMORPG, which pretty much put them on the map and made all major franchises want to follow (like Star Wars and Elder Scrolls), it was only a matter of time before someone got the bright idea to do a live action movie of Warcraft.

As you can see from the trailer, the movie tells the story of the Orcs falling upon the Azeroth and laying siege to it. But in a twist, we learn that the Orcs are waging war not only because of their warlike culture, but for their survival. Seems that their home realm, Draernor, is becoming inhospitable out or something.

I have to say, this is not the plot of the Warcraft I knew and loved. That game was morally unambiguous and didn’t contain all this “we have to come together for the sake of all of our survival” crap! Then again, the movie may not be a total suckfest. But I’m sure the folks at Comic-Con will be complaining bitterly!

This past week, the Electronic Entertainment Expo (commonly referred to as E3) kicked off. This annual trade fair , which is presented by the Entertainment Software Association (ESA), is used by video game publishers, accessory manufacturers, and members of the computing industry to present their upcoming games and game-related merchandise. The festivities wrapped up this Friday, and was the source of some controversy and much speculation.

For starters, the annual show opened amidst concerns that the dent caused by Massively Multilayer Online Role Playing Games (MMORPGs) and online gaming communities would start to show. And this did seem to be the case. While the annual Los Angeles show normally sets up the expectations for the rest of the year in video games – and that certainly did happen – but E3 2014 was mainly about clearing the runway for next year.

Nowhere was this more clear than with Nintendo, which was the source of quite a bit of buzz when the Expo began. But it was evident that games – particularly for the Wii U – were not going to materialize until 2015. The company got a jump on the next-generation console battle by launching its Wii U in late 2012, a year ahead of Sony and Microsoft, but poor sales have led to big game developers largely abandoning it.

And while the company did announce a number of new games –  including an open-world Legend of Zelda; the new Mario game that allows players to create custom levels, called Mario Maker; and Splatoon, where teams of players shoot coloured ink at each other – none are scheduled for release until next year. That dearth of blockbusters for the rest of 2014 is mirrored at Microsoft and Sony, which are also light on heavyweight first-party titles for the rest of this year.

The companies have some respective big guns in the works, such as Halo 5: Guardians and Uncharted 4: A Thief’s End, but they’re also scheduled for release in 2015. However, with the brisk sales of the Xbox One and PlayStation 4 consoles, both companies have the luxury of taking their time with big games. Nintendo is not so fortunate, since the jump they made with the Wii U leaves them with a big gap that they aren’t apparently filling.

Nintendo’s comparatively under-powered Wii U, in contrast, will look even less capable than its rivals as time passes, meaning it can’t afford to wait much longer to get compelling titles to market, especially as financial losses mount. Even long-time Nintendo supporters such as Ubisoft aren’t exactly sure of what to make of the Wii U’s future. The other big question heading into E3 was whether Microsoft could regain its mojo.

The software giant bumbled the Xbox One launch last year and alienated many gamers, mainly by focusing on TV and entertainment content instead of gaming and tying several unpopular policies to the console, which included restrictions on used games. The company eventually relented, but the Xbox One still came bundled with the voice- and motion-sensing Kinect peripheral and a price tag that was $100 higher than Sony’s rival PlayStation 4.

The result is that while the Xbox One has sold faster than the Xbox 360 at five million units so far, it has still moved two million fewer units than the PS4. Changes began to happen in March when Microsoft executive Phil Spencer, known as a champion of games, took over the Xbox operation and wasted no time in stressing that the console is mainly about gaming, and made the Kinect optional – thus lowering the Xbox One’s price to match the PS4.

That was certainly the focus for Microsoft at E3. TV features weren’t even mentioned during the company’s one-and-a-half-hour press conference on Monday, with Microsoft instead talking up more than 20 upcoming games. As Mike Nichols, corporate vice-president of Xbox and studios marketing, said in an interview:

We didn’t even talk about all the platform improvements to improve the all-out gaming experience that we’ve made or will be making. We wanted to shine a light on the games.

Another big topic that generated talk at the show was virtual reality, as this year’s E3 featured demonstrations of the Oculus Rift VR headset and Sony’s Project Morpheus. The latter has been the source of attention in recent years, with many commentators claiming that it has effectively restored interest in VR gaming. Though popular for a brief period in the mid 90’s, interest quickly waned as bulky equipment and unintuitive controls led to it being abandoned.

But this new virtual reality headset, which was recently bought by Facebook for $2 billion, was undeniably the hottest thing on the show floor. And the demo booth, where people got to try it on and take it for a run, was booked solid throughout the expo. Sony also wowed attendees with demos of its own VR headset, Project Morpheus. And while the PlayStation maker’s effort isn’t as far along in development as the Oculus Rift, it does work and adds legitimacy to the VR field.

And as already noted, the expo also had its share of controversy. For starters, Ubisoft stuck its proverbial foot in its mouth when a developer from its Montreal studio admitted that plans for a female protagonist in the upcoming Assassin’s Creed: Unity had been scrapped because it would supposedly have been “too much work”. This lead to a serious fleecing by internet commentators who called the company sexist for its remarks.

Legendary Japanese creator Hideo Kojima also had to defend the torture scenes in his upcoming Metal Gear Solid V: The Phantom Pain, starring Canadian actor Kiefer Sutherland (man loves torture!), which upset some viewers. Kojima said he felt the graphic scenes were necessary to explain the main character’s motivations, and that games will never be taken seriously as culture if they can’t deal with sensitive subjects.

And among the usual crop of violent shoot-‘em-up titles, previews of Electronic Arts upcoming Battlefield: Hardline hint that the game is likely to stir up its share of controversy when it’s released this fall. The game puts players in the shoes of cops and robbers as they blow each other away in the virtual streets of Los Angeles. Military shooters are one thing, but killing police will undoubtedly rankle some feathers in the real world.

If one were to draw any conclusions from this year’s E3, it would undoubtedly be that times are both changing and staying the same. From console gaming garnering less and less of the gamers market, to the second coming of virtual reality, it seems that there is a shift in technology which may or may not be good for the current captains of industry. At the same time, competition and trying to maintain a large share of the market continues, with Sony, Microsoft and Nintendo at the forefront.

But in the end, arguably the most buzz was focused upon the trailers for the much-anticipated game releases. These included the trailers for Batman: Arkham Knight, Call of Duty: Advanced Warfare, Farcry 4, Sid Meier’s Civilization: Beyond Earth, and the aforementioned Metal Gear Solid V: The Phantom Pain, and Assassins Creed Unity. Be sure to check these out below: