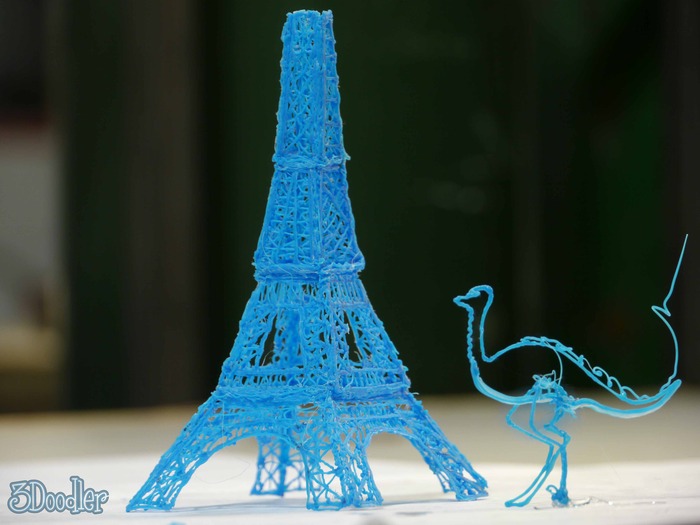 3D printing technology has been making some serious waves in the scientific, engineering and biomedical community. It seems that every day, more and more possibilities and applications are being discovered for this revolutionary new process. However, cost remains an obvious issue. With an individual printers being large, expensive and trying to maintain, most people can’t exactly afford to put one in their home and go town with it.

Enter the 3D Doodler, the world’s first 3-dimensional printing pen that allows you to draw in the air. Much like a standard 3D printer, it employs heated ABS plastic which then cools the moment it is excreted from the devices, instantly cooling and taking shape. And much like a pen or pencil, it is compact, hand-held, and allows people to literally draw designs into being! It also requires no software or computers, making it inexpensive and easy to use.

And the range of what one can create is pretty much limitless. Using stencils, one can create 3D models for architecture, design specs, and proposed prototypes. Or, if you should so choose, just put the pen to any surface and begin composing shapes, designs and words out of thin air. Art is also an obvious application, since it give the user the ability to create an endless array of abstract or realistic designs. And of course, modeling, as shown in the video, could become a very popular (and competitive) outlet for its use.

And in another ultra-modern twist, the designers of the 3D Doodler are using their website to elicit funds to help them crowd-fund their idea and make it commercially viable. No trouble there! Of the $30,000 needed to get the prototype off the ground, they have managed to illicit a total of $2,106,977 as of this article’s publication. Guess people really do want to see these things getting onto the shelf. Look for it at your local hardware or art supply store!

And while you’re waiting, check out the video below to see the pen in action and what things it can make.