I’ve been thinking… which is not something novel for me, it just so happens that my thoughts have been a bit more focused lately. Specifically, I have an idea for an invention: something futuristic, practical, that could very well be part of our collective, computing future. With all the developments in the field of personal computing lately, and I my ongoing efforts to keep track of them, I hoped I might eventually come up with an idea of my own.

Consider, the growth in smartphones and personal digital assistants. In the last few years, we’ve seen companies produce working prototypes for paper-thin, flexible, and durable electronics. Then consider the growth in projection touchscreens, portable computing, and augmented reality. Could it be that there’s some middle ground here for something that incorporates all of the above?

Ever since I saw Pranav Mistry’s demonstration of a wearable computer that could interface with others, project its screen onto any surface, and be operated through simple gestures from the user, I’ve been looking for a way to work this into fiction. But in the years since Mistry talked to TED.com and showed off his “Sixth Sense Technology”, the possibilities have grown and been refined.

And then something happened. While at school, I noticed one of the kids wearing a jacket that had a hole near the lapel with a headphones icon above it. The little tunnel worked into the coat was designed to keep the chord to your iPod or phone safe and tucked away, and it got me thinking! Wires running through a coat, inset electrical gear, all the advancements made in the last few years. Who thinks about this kind of stuff, anyway? Who cares, it was the birth of an idea!

For example, its no longer necessary to carry computer components that are big and bulky on your person. With thin, flexible electronics, much like the new Papertab, all the components one would need could be thin enough and flexible enough to be worked into the inlay of a coat. These could include the CPU, a wireless router, and a hard drive.

Paper-thin zinc batteries, also under development, could be worked into the coast as well, with a power cord connected to them so they could be jacked into a socket and recharged. And since they too are paper-thin, they could be expected to move and shift with the coat, along with all the other electronics, without fear of breakage or malfunction.

And of course, there would be the screen itself, via a small camera and projector in the collar, which could be placed and interfaced with on any flat surface. Or, forget the projector entirely and just connect the whole thing to a set of glasses. Google’s doing a good job on those, as is DARPA with their development of AR contact lenses. Either one will do in a pinch, and could be wirelessly or wired to the coat itself.

Addendum: Shortly after publishing this, I realized that a power cord is totally unnecessary! Thanks to two key technologies, it could be possible to recharge the batteries using a combination of flexible graphene solar panels and some M13 peizoelectric virus packs. The former could be attached to the back, where they would be wired to the coats power system, and the M13 packs could be placed in the arms, where the user’s movement would be harnessed to generate electricity. Total self-sufficiency, baby!

And then how about a wrist segment where some basic controls, such as the power switch and a little screen are? This little screen could act as a prompt, telling you you have emails, texts, tweets, and updates available for download. Oh, and lets not forget a USB port, where you can plug in an external hard drive, flash drive, or just hook up to another computer.

So that’s my idea, in a nutshell. I plan to work it into my fiction at the first available opportunity, as I consider it an idea that hasn’t been proposed yet, not without freaky nanotech being involved! Look for it, and in the meantime, check out the video of Pranav Mistry on TED talks back in 2010 when he first proposed 6th Sense Tech. Oh, and just in case, you heard about the Computer Coat here first, patent pending! 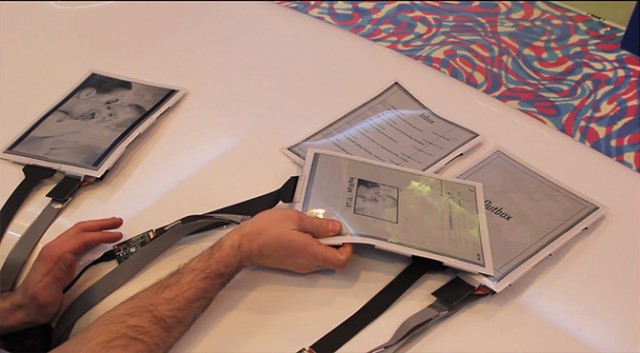 Score one for Canadian researchers and ingenuity! Oh, and Intel and Plastic Logic helped out a little bit 😉 It’s known as the PaperTab, a revolutionary concept which builds on the paper-thin smartphone and recent advances in AMOLED flexible displays. The design made the rounds at this year’s Consumer Electronics Show in Las Vegas, and it turned quite a few heads!

As already noted, the PaperTab incorporates the latest in display and flexible technology to create a 10.7-inch e-ink touchscreen display, powered by a Core i5 processor. Users control it by bending and flexing, touching the screen, and tapping one tab to the next. But instead of using it like a normal tablet, the idea is that you have lots of PaperTabs, with each tablet representing a different app – such as email, a typeface, a browser, a and so on.

This might sound like a bit of a downgrade, but the coolest thing about this new computing paradigm is that each PaperTab is aware of other PaperTabs in its proximity. You might push two PaperTabs together to extend an app onto two screens, or you could attach a file to an email by simply tapping one PaperTab on another. In this way, a PaperTab functions like an ordinary document, but with the added benefit of being electronic and transferable.

As it stands, the concept is merely a tech demo being put on by researchers from Queen’s University and corporate reps from Intel and Plastic Logic. No other information is currently available from any of these sources, but it’s likely more will trickle down to the market now that CES 2013 has wrapped up and they don’t need to keep us guessing anymore. And if I were a betting man, I’d say they’ll be available in packs of five or ten, for roughly the same price as an IPad 7 since they’ll probably be coming out at the same time.

Check out the video below of the PaperTab on display at CES 2013 and the demo the team provided:

The last decade has seen some real interesting developments in the field of digital technology and telecommunications. Perhaps too interesting! When one considers the kind of over-saturation  that has taken place with smartphones in recent years, not to mention the cavalcade of proposed concepts that are expected to take the field in the next few, one could get the impression that were moving too fast.

But that’s the nature of technological progress, it’s an iterative process that’s subject to acceleration. And of course, just because we’re being bombarded with countless proposals doesn’t mean they are all going to come true.  But what is clear is that the smartphones of the next generation are going to have a few things in common.

For example, flexible concepts are likely to be all the rage, as are touchscreens which have become the current mainstay. In addition, the phones are likely to be miniaturized even farther, some to the point of being paper thin and even collapsible. Transparencies are also a common concept, as are holographics and the ability to morph into other shapes.

In the end, its an open sea, and people will be free to pitch any and all combinations of these basic ideas. And there’s no telling which one’s will catch on and which one’s won’t. But one thing is clear. The end results are likely to be mighty cool and are sure to complicate our lives much, much more! And here are just some of the proposed concepts that are we likely to be seeing in the next few years… 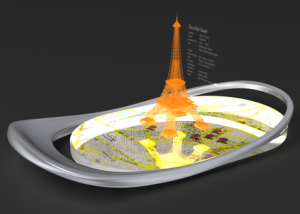 Mac Funamizu’s “Cobalto” has taken the cell phone concept way into the future, with an almost all-glass design. The phone would feature 3D imaging that could make Google Maps even more useful, as demonstrated here.

A pop-up phone! Ilshat Garipov’s “Kambala” is a fascinating concept that features a center piece that can pop out to fit into your ear, making it an earphone. In theory, it will also have the ability to match your skin tone, rendering it almost invisible. 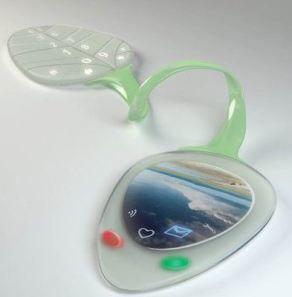 Anastasia Zharkova’s organic “Leaf Phone” melds aesthetic creativity with functionality. The winding stem of the leaves could be wrapped around a user’s arm, wrist, neck, or other body part.

Aleksander Mukomelov’s “Mobile Script” phone starts with a stylish and sleek small screen, then reveals a larger touchscreen hidden within the phone’s body to meet all of your media device needs. 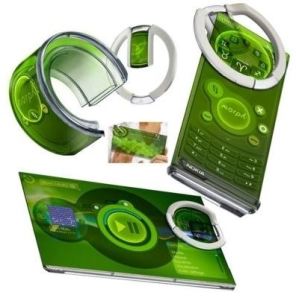 Nokia’s “Morph” phone uses nanotechnology to create a flexible body and transparent screen that can be molded to whatever shape is the most convenient for its user. The nanotech could even clean itself.

Emir Rifat’s “Packet” phone won first place at the Istanbul Design Week 2007. The tiny phone starts off at 5 cm square, then folds out as needed for different functions.

At first glance, this entrant into Fujitsu’s cell phone design contest looks like an ordinary paperweight. Actually, it’s a cleverly disguised phone. As the picture shows, the small black dot can be transformed into a keypad, media panel or web browser depending on what corner of the plastic handset you drag it to.

Liu Hsiang-Ling’s “Sticker Phone” has a solar panel on the back of the phone and a curved surface that will allow it to stick to a window via suction to charge. Plus, you won’t lose your phone somewhere on your desk. 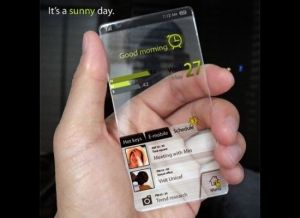 Designed by Seunghan Song, this “window phone” concept will reflect current weather conditions on the screen. To input text, you just blow on the screen to switch modes, then write with your finger as a stylus.